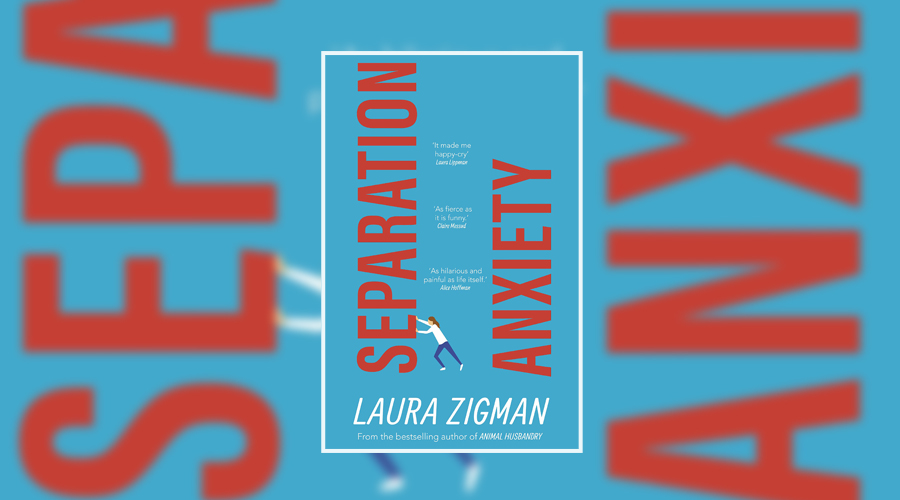 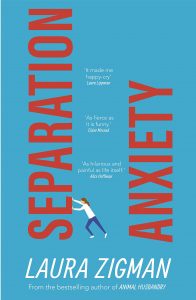 Judy has been having a tough time of it lately. Years ago she published a successful children’s book but ever since, inspiration has been slow to strike. And so money has become a struggle for her family, so much so that she is unable to afford a divorce from her pot-addicted husband Gary, who has been living in the basement. When you throw in a teenage son who seems to hate her, and a best friend who is dying of cancer, it’s no wonder Judy has taken to wearing the family dog in a baby sling and toting her around wherever she goes. It’s what anyone would do. Isn’t it?

At first glance, Separation Anxiety looks like it may suffer from that most horrendous fictitious affliction – an excess of quirk. From the main character carrying a dog around like it’s a baby, to chapter headings like ‘The Secret Pooper’, and ‘The Arrival Of The People Puppets’, you couldn’t be blamed for worrying that Laura Zigman’s latest novel would be so kooky as to set your teeth on edge.

Yet you’d be wrong. Dead wrong. Although the method Judy chooses of dealing with her situation is a little… eccentric, that doesn’t mean the book follows suit. Separation Anxiety is painfully honest about the vulnerabilities of its main character: her insecurity, her loneliness, her depression. Judy knows that she has a lot of issues. It doesn’t make her feel any better, but she is not lacking in self-awareness. She does some stupid things – spending way too much money on frivolities, defacing the house of a social media influencer – but she at least knows that they’re stupid. That knowing vulnerability is what makes her such good company. She’s an easy person to like, to relate to. From the first time that she puts the dog in the sling, you really are rooting for her.

You’re also rooting for her marriage. Perhaps the most moving element of Separation Anxiety is the nuanced, sympathetic way that Zigman paints the relationship between Judy and Gary. Though they have been ‘separated’ for a while, their connection is still strong. Gary is frustrated with the whole dog situation, but his own crippling anxiety helps him to understand where his wife’s head is at. They are both dealing with careers that didn’t turn out the way they planned: Gary’s band once opened for Aerosmith, now he works for a snack dispensary company. Marriages end – that’s just the way it goes sometimes. As far as Judy and Gary are concerned, however, it seems like their time isn’t up yet…

Whether it be people, food, alcohol, or a dog in a baby sling, everyone has a comfort blanket they turn to on their darker days. In Separation Anxiety, Laura Zigman shows us the awkward, funny, painful journey of a woman learning to live without hers – at least some of the time. Like its messy, flawed heroine, Separation Anxiety is so easy to relate to, and to love.

Separation Anxiety is published by Doubleday on 16 April 2020