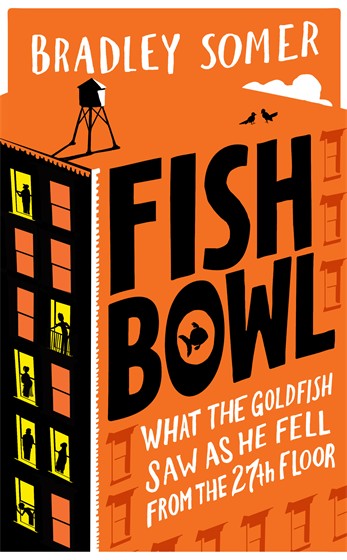 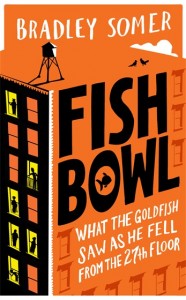 What other book can boast a goldfish as both the protagonist and eyewitness to the characters, dramas and events that unfold? Bradley Somer’s engaging UK debut novel, Fishbowl, does just that, taking the reader on a unique journey of escapism.

Ian is a goldfish who lives out his humdrum life in a bowl with a very pleasant view – positioned on the balcony of the 27th floor of the ‘Seville on Roxy’ apartment block. Whilst Ian experiences sporadic desires for a life more interesting, he is ultimately just a goldfish and dwells little on time and place, mostly living in the moment. However, a series of ill-fated events culminate in his astonishing escape and rapid propulsion into freefall.

During this short but life-affirming experience, Ian witnesses snapshots of the Seville on Roxy’s inhabitants colourful lives. Their foibles and mysteries unfold dramatically whilst Ian somersaults ever downward on his death-defying flight.

During the half-hour lead up to Ian’s launch, the story introduces the Roxy’s residents. These include Connor Radley, a good-looking grad student who is about to realise and proclaim his true feelings to his beautiful girlfriend Katie, who has yet to discover his unscrupulous tendencies. Enter the pragmatic man-magnet Faye, who seems unaware of the effect she has on the opposite sex.

Jimenez is the undervalued but stoic maintenance man who fixes everything in his thankless job, but meets his biggest challenge yet with the temperamental elevator, which takes longer to put right than expected.

Then there’s Garth, your average construction worker who’s working on a nearby site and is also a Roxy resident. Behind his stereotypical site-worker image he has a not-so-average secret, but it is one that will soon be shared with the most improbable person you could imagine.

Claire also lives alone in the Roxy. She is an agoraphobic but prefers the term ‘aggressively introverted individual’. It is her ‘dirty phone talk’ that provides her with the means to live and allow her phobias to stay shut away and hidden from the outside world.

Everything kicks off when Claire’s sheltered existence is shattered by the very heavily pregnant Petunia Delilah, a nearby resident of the Roxy who has been on enforced bed rest. She arrives on Claire’s doorstep pleading for help and wails that she has an unconscious boy (home schooled Herman) in tow.

What follows will test all these characters and bring out the best – or the worst – in them. I was particularly touched by Herman’s character, and through Somer’s clever characterizations I could really imagine what was going on in his eleven year old mind. I also enjoyed Ian’s musings about his fishbowl companion, Troy the snail, and the wonderfully comic description of their world inside the glass dome; I could feel Ian’s building frustration with his docile roommate.

I didn’t have the usual problem I have with some books that flick from character to character, because the chapters were kept short, which made this much more easy going and gave a nice flow to the story. A wily touch is the tiny drawing of Ian on every page in his rapid freefall – a nice nod to the old flip books!

The stories behind the characters were described with warmth, humility and always peppered with humour. Fishbowl is a unique, innovative and thought provoking story about life and about people, with all their human qualities. It’s a really refreshing read that is a perfect book to take on your summer holiday.

The Ways Of The Dead – Neely Tucker Review