When the first book in Lauren Kate’s YA fantasy series was published in 2009, it captured the hearts and minds of an audience of readers who adored paranormal romance stories. Like Stephenie Meyer’s Twilight before it, Fallen also centred on a seemingly ordinary girl who finds herself swept up in a world of mythical beings and torn between two very different boys. The only problem is, whilst the cinema adaptation of Twilight (and its subsequent sequels) arrived at the peak of the book’s popularity – capitalising on the mania surrounding the series – Scott Hicks’ Fallen movie has come at a time where cinephiles have been there, done that, got bored with the t-shirt and thrown it in the trash a long time ago.

Drawing conceptual similarities with Meyer’s worldwide phenomenon, Kate’s story swaps vampires for fallen angels, as a battle between heaven and hell ensues on earth. This is a tale steeped in religious, good vs. evil, God vs. Lucifer mythology, but the film isn’t subtle about how it goes about introducing the backstory. “Before there was light, there were angels. One moment darkness, the next heaven was bright with glorious beings. It was perfect. It did not last,” utters a mysterious sounding Joely Richardson as the opening scene unfolds. What follows is what feels like one long series of flashbacks, broody stares and not-at-all cryptic dialogue that practically shoves the story down the viewer’s throat. 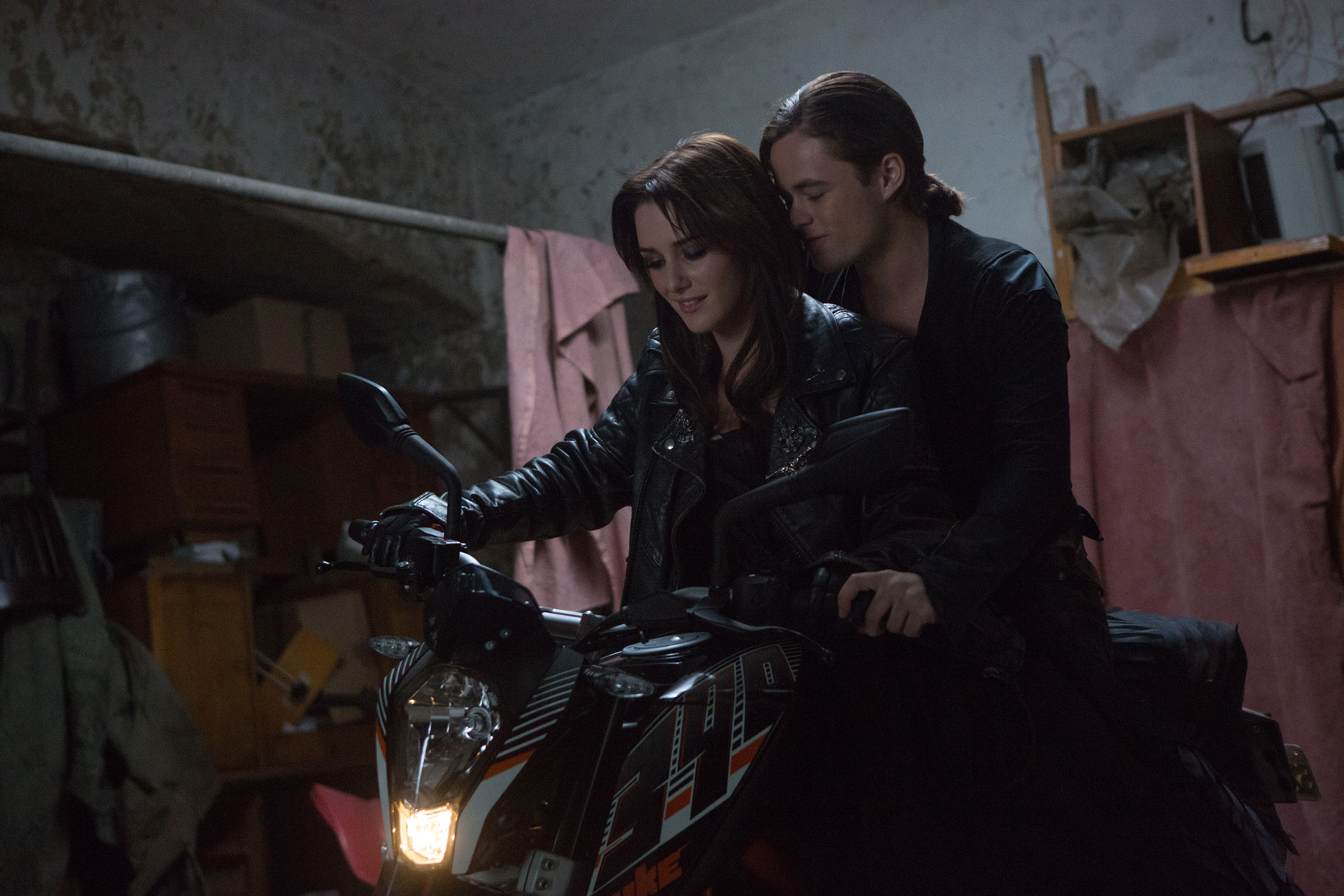 Addison Timlin, best known for The Town That Dreaded Sundown and Odd Thomas, stars as Lucinda ‘Luce’ Price, who’s sent to Sword & Cross reform school after she’s accused of killing a boy under murky circumstances and diagnosed with a dangerous psychosis that deems her a threat to society. The school is full of other teen miscreants who don’t fit in: the bitchy Goth who has it in for the new girl, the boy in trouble with the police who can’t stop staring at the new girl, the enigmatic brooding boy who doesn’t want to be anywhere near the new girl – sound familiar?

Tormented by strange visions, Luce finds herself attracted to two polar opposite students – Cam (Harrison Gilbertson), the apparent bad boy (we know this because he wears all black and rides a motorbike – like all bad boys do, duh), and Daniel (Jeremy Irvine), who’s being purposely evasive despite Luce feeling like they already know each other. Meeting Daniel, Cam and the other secretive students of Sword & Cross, none of whom seem to have existed before they arrived at the school, is the catalyst for Luce discovering the secrets of her past – one that involves reincarnation, tragically fallen angels and a soul-destroying kind of love that eclipses Bella and Edward.

Whilst the movie rights were snapped up in the same year that the book was published, it took a whopping eight years for the film to be released and that’s the main problem with Fallen. The story feels dated and the execution rests too heavily on people already being familiar with the books. It’s a love letter to fans of the novels who’ve been waiting patiently to see their favourite characters brought to life on screen, but it offers nothing for anyone who’s not acquainted with the source material. Even those who enjoyed the books will find little to enthuse over here (as a fan of the novels, you can trust me). 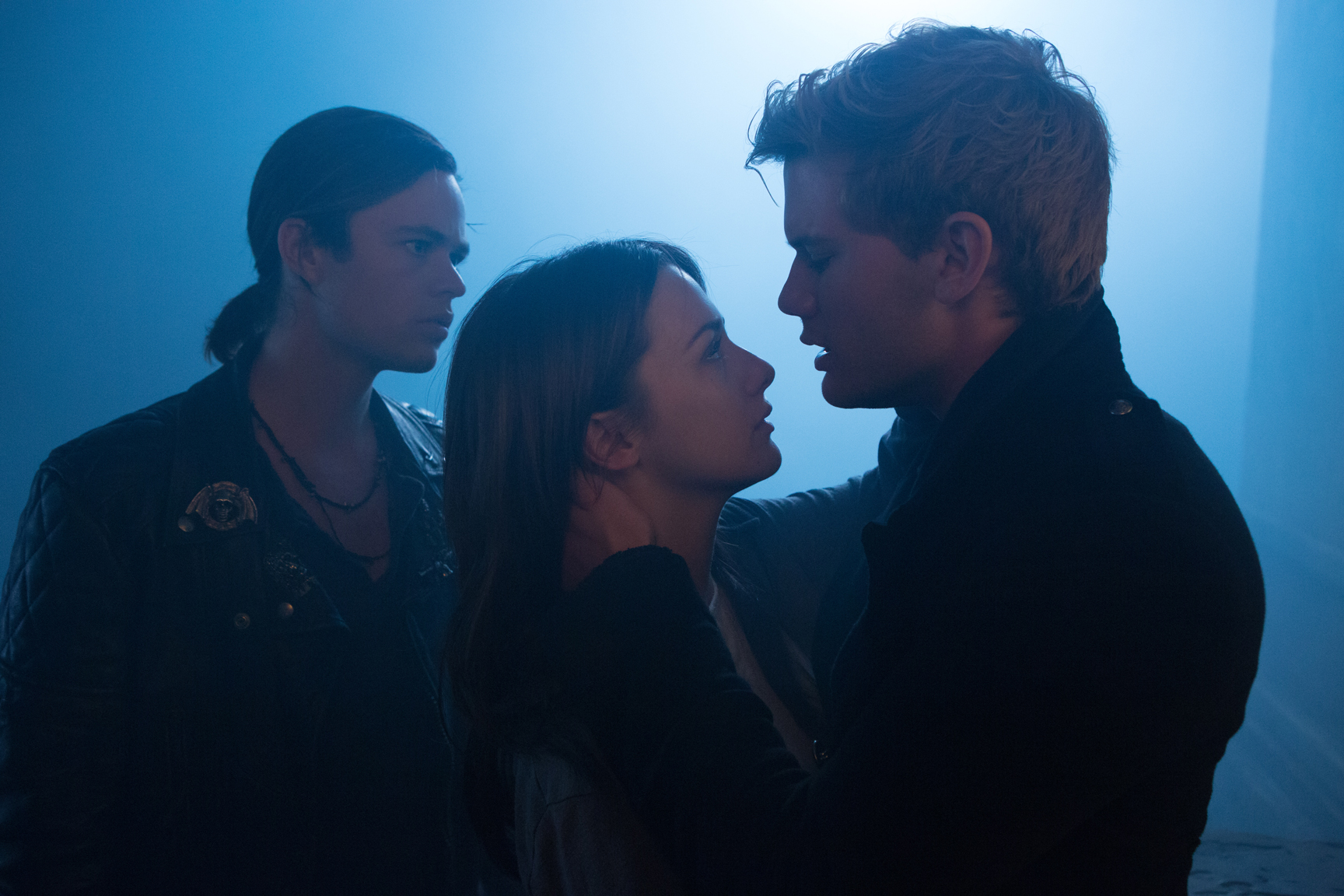 The characters, bar Lola Kirke’s Penn – who’s the only one given room to breathe and show some personality – are frustratingly one-dimensional. Jeremy Irvine does his best Robert Pattinson impression, practically vibrating with conflicted feelings about his forbidden love, which sees him rendered mute for the first quarter of the film. When you’ve seen how brilliant he was in War Horse, it’s a shame he’s reduced to such melodrama with a character like Daniel. Timlin is a likeable enough lead with a promising acting range, but like so many pre-2010 YA fantasy novels, Luce is a character entirely defined by males and it’s such a boring trope.

Much of the film’s issues come from the script and blatant exposition-heavy dialogue. The narrative shifts focus as much as the cinematography does, prioritising moody, atmospheric shots over telling a cohesive story. Whoever was in charge of the smoke machine should have reined it in – there are only so many misty, forest shots an audience needs and/or wants to see. In many ways Fallen is the spiritual successor of Shadowhunters, which failed as a movie but has been a big hit as a TV series – a better-suited format that would have allowed Lauren Kate’s story to be told in a less hurried and ham-fisted way.

When the actual angel wings make an appearance near the end, it feels awkward rather than exciting, with rushed editing and shoddy effects. The fact that there’s no concrete conclusion, with the obvious intention of leaving things open for a sequel that will probably never happen now, also means there’s zero satisfaction when the credits roll; though you’ll probably be thankful for the end at that point. There’s an age-old saying that the movie is never as good as the book and in this instance, it couldn’t be more accurate.