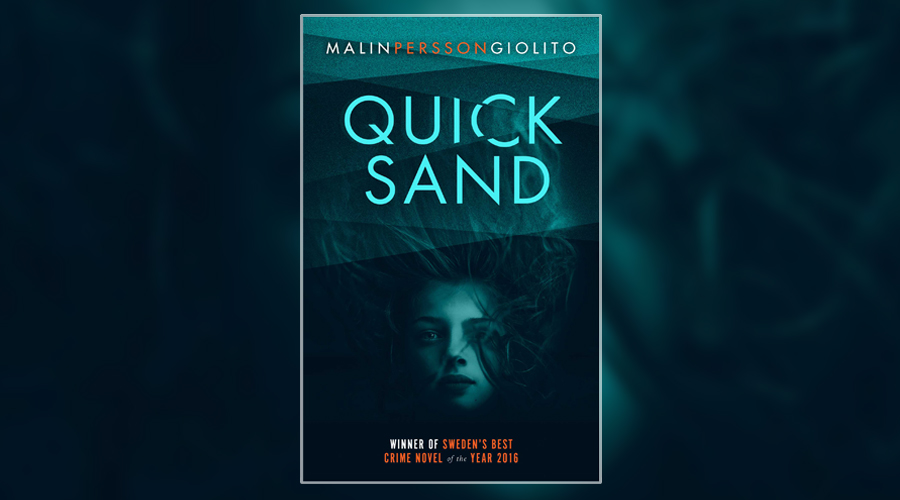 As a former lawyer for the biggest law firm in the Nordic region, it’s hardly a surprise that Swedish author Malin Persson Giolito has chosen the criminal justice system as the overarching theme for her fourth novel and English language debut, Quicksand. A tense courtroom drama about love, guilt and obligation, it shrewdly and perceptively explores the issues that continue to mar modern society.

A mass shooting forms the backstory of Quicksand, as eighteen-year-old student Maja Norberg is put on trial for her involvement in a school massacre that claimed the lives of multiple people. Included in the body count is her best friend, Amanda, and her boyfriend, Sebastian, who planned and instigated the fatal bloodbath and only stopped when Maja shot and killed him. From the very beginning, a question is posed simultaneously to the court and the reader: Innocent or guilty? Maja herself isn’t even sure what sort of verdict she deserves, and as the story unfolds, the young adults’ lives come under extreme scrutiny.

Between trial hearings, Maja takes the reader back to the moment she became entangled in Sebastian’s life – from the outwardly carefree days of their early romance to the souring of their relationship and its eventual decline. All this leading up to the deterioration of Sebastian’s mental state and the moment Maja found herself holding a gun in a classroom of her peers. Told from Maja’s perspective, she contemplates her relationship and the multiple systems that failed and neglected not only wealthy and privileged Sebastian, but other demographics – immigrants, refugees, the poor and disadvantaged.

Maja spends nine months in jail, which gives her plenty of time to mull over the events that led to her being incarcerated. At the beginning it seems that she doesn’t feel any guilt, but slowly her emotions and internal struggles are drawn out into the open. How did the well-educated and studious teenager with a promising future become one of the country’s most hated people? The public’s opinion is based solely on how Maja is portrayed in the news, and it’s fascinating to see how Maja’s defence team build a case to make her seem, not innocent of all crimes exactly, but not worthy of being found guilty of murder either.

“The people crowding outside this courtroom throwing cobblestones at each other because they hate me and everything they think I stand for, I’m sure they would say it started with capitalism, or the monarchy, or the conservative government, or when we stopped believing in the Norse gods or something else absurd that they have no logical explanation for.”

Quicksand is at once a tense courtroom tale and a sharp indictment of our society. The unfair class system comes under intense analysis, as does the economic structure, racial prejudice and affluent parents who neglect their offspring. With so many issues to cover, it would be easy for Giolito to wander off course, but she melds the varying themes together seamlessly. With the current societal climate in Europe, these issues feel particularly, and worryingly, relevant.

The first half of the book takes a slow pace, hooking the reader in with the ambiguity of Maja’s guilt. But the second half of the novel is where the story really comes together, as all the different elements collide to reveal what really led to the fateful day that changed Maja’s life. By the time a verdict is reached, and the world learns Maja’s fate, the writing is so tense you’re compelled to turn the pages with lightning speed. You’ll never entirely like or dislike Maja, but you’ll be intrigued by and fascinated with her from start to end.

Giolito is a forceful writer who tackles big subjects in subtle and not-so-subtle ways. Through emotive chapters, she allows Maja time to come round to her actions and contemplate how she ended up in a prison cell, which in turn gives the reader plenty of time to form their own opinion of her guilt and complicity. Even when you think you’ve worked out what truly happened, nothing prepares you for the chapter that explores the pivotal scene where a shell-shocked Maja is surrounded by the bloodied bodies of her friends and lover. Only then does everything become clear.

Quicksand is a combination of drama and suspense, with a few thrills along the way, and a real feeling of injustice running throughout. What makes it all the more powerful is that the same injustice is something we all live with in the real world too.

Quicksand was published by Simon & Schuster on 6 April 2017