Filmmaker Orlando von Einsiedel has a secret within his family. The two parents and three children have barely spoken about it in thirteen years. In 2005, Orlando’s brother, Evelyn, committed suicide after years of battling depression and schizophrenia. We would assume Evelyn might explore schizophrenia, suicide and depression in medical detail but Evelyn opts to focus on one family and their struggle to reflect and discuss the nightmare they have experienced. It is a difficult watch, as viewers are bound to know – or know personally – a dynamic within their own family, where discussing personal challenges is simply not on the table. Evelyn is intent on facing that, head on.

It begins as Orlando nervously opens a letter; his brother’s final letter, found in his pocket on the day he died. Orlando has not been able to say his name in the years since, let alone meaningfully talk about it with his sister Gwendoline (affectionately known as “Gwennie”) and brother Robin. He sets out a plan involving multiple walks (a favourite past time for his family) and recording every moment. Each walk would include the siblings but, additionally, their mother, their father and Evelyn’s closest friends. They recount different experiences and the moments that weighed heaviest on their mind. Memories of the day he died break family members in two, as they stumble and stop, in tears. Sometimes they laugh, as in one instance when their mother mentions her vivid memories of the “twinkle in his eyes” and his famous farts. It is something Orlando could not believe his mother would remember so fondly – especially as Orlando himself could recall the smells so clearly too. Their father, who separated from their mother when they were all young children, has a pragmatic and direct approach – something at odds with some. Evelyn’s friends, Jack and Leon, bring meaningful and powerful talking points to the group. They meet strangers who have their own experience of suicide and it strengthens the siblings in their search for any type of solace.

Whether we are in the Highlands of Scotland, the Lake District or South Downs, the direction captures a beauty that only an experienced filmmaker can bring to the screen. It is no surprise that von Einsiedel is the director behind Oscar-nominated short documentary, The White Helmets and the celebrated Oscar-nominated Virunga. Drone shots reveal detailed birds-eye-views, giving Evelyn a grand quality few films of this nature receive. Indeed, the effort to physically capture the chatting, and walking, and climbing – from the front of the group – must have presented all sorts of challenges in the production. We are the lucky ones to see the fruits of their labour. A waterfall; a vast landscape; trickling streams. Immersed in the beauty of nature, despite the tragic story, ensures that Evelyn is a fine-looking and impressive feature. 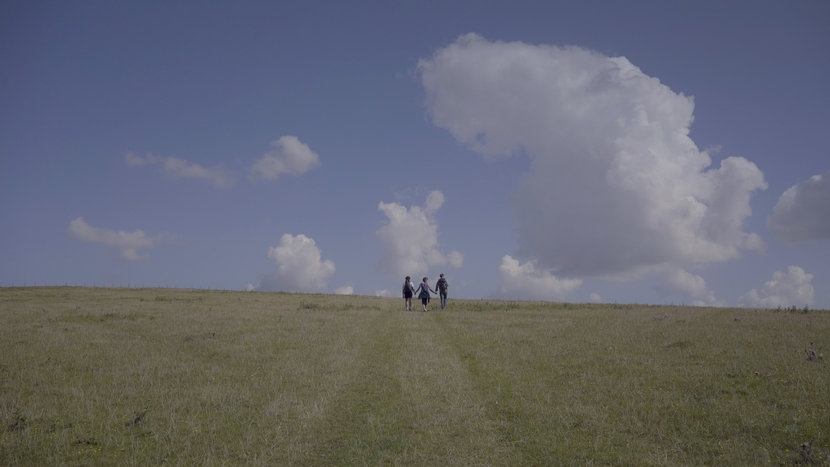 These particular walks were routes the family took before, with Evelyn himself. He enjoyed the ramble and the pictures we see show a boy with his arms wide, as if he soaks up the scale and majesty of an incredible view. The family re-stages these pictures and the hole of this sibling, missing from their lives, is achingly real. There are moments that allude to the tensions that remain between relatives. In particular, Evelyn’s father. The children mock his German accent and he, in turn, seems to make the most thoughtless comments to his daughter, Gwen. It is in these unexpected situations where the editing and use of mics reveal deeper difficulties. While one group hug and cry together, another stands a little distance away, frustrated. Their microphones pick up these entirely different responses to the moment of grief.

Evelyn has a clear purpose: to open up the twists and knots that tie a family together. Researchers and doctors are nowhere to be seen and the family are our only connection to Evelyn. By chance, Evelyn’s friend, Jack, had experienced suicide in his family but we see no survivors talk about how they regained confidence and tackled their depression. Evelyn is intimately close to the family and the way they have dealt with their loss. Personal, heart-breaking and uncomfortably revealing, Evelyn is an unforgettable documentary that forces us to acknowledge the important bonds between family – bonds we must hold tightly before they are lost altogether.