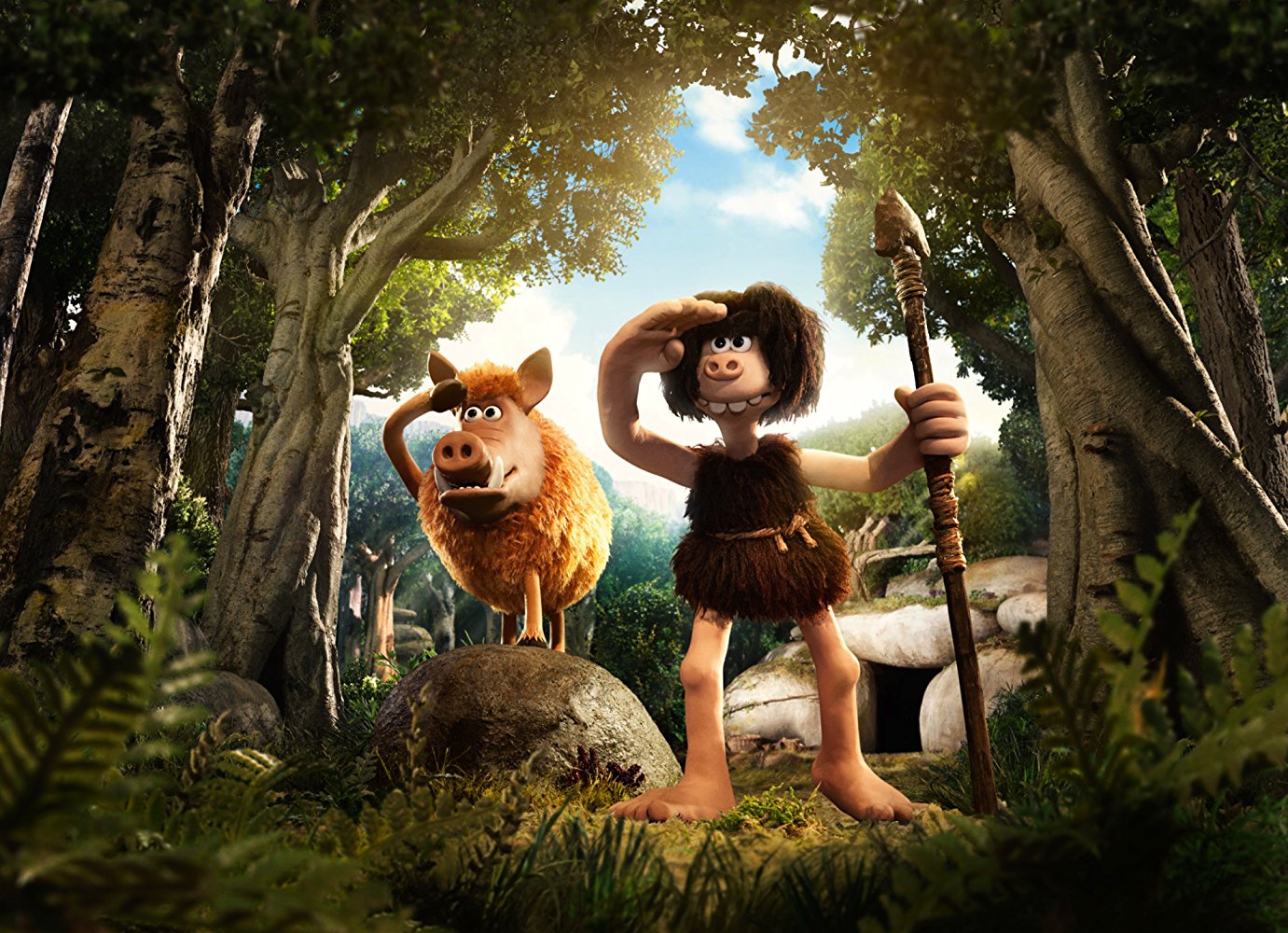 One weekend after the release of Coco, Aardman animation return with Early Man. To clarify, they are entirely different beasts but share in their target audience: families. Pixar, immersed in Mexican culture, create a tale that pulls at the heart strings and explores the poignant and deeply personal human theme of death. Early Man, in stark contrast, takes somewhat engaging topics – the Stone Age and football – and mashes them together. Unlike Wallace and Gromit, with their warm Britishness and wacky inventions capturing the imagination of children and adults alike, Early Man cracks Flintstones jokes and imitates funny accents to bored chuckles. While holding good intentions, Early Man is meaningless fun, with no effort to aspire to anything more. Compared to Pixar, it’s an embarrassing offering.

Dug (Eddie Redmayne) and his dog-sounding pig, Hognob, live in a big crater chasing rabbits and happily using stones to get by. Dug aspires to greater things (“Why aren’t we hunting mammoths?” he asks) but the leader of the clan, Chief Bobnar (Timothy Spall), doesn’t want things to change: hunting rabbits is fine. But the world keeps turning and a metal-clad, bronze army breaks into their idyllic world, led by Lord Nooth (Tom Hiddleston), and destroys where they live. Within the stones are pieces that can be melted down and used. The primitive family are kicked off their land and forced onto the barren “Bad Lands” to live out their days. Except, Dug is mistakenly captured and witnesses the Gladiator-like games played by these modern men of the world: football. He challenges the bronze team to a match and bets his family’s entire homeland on it. If they win, they’ll get their small village back or they’ll be banished forever. It’s a sports-film by numbers and the anticipated pacing carries the film along smoothly. 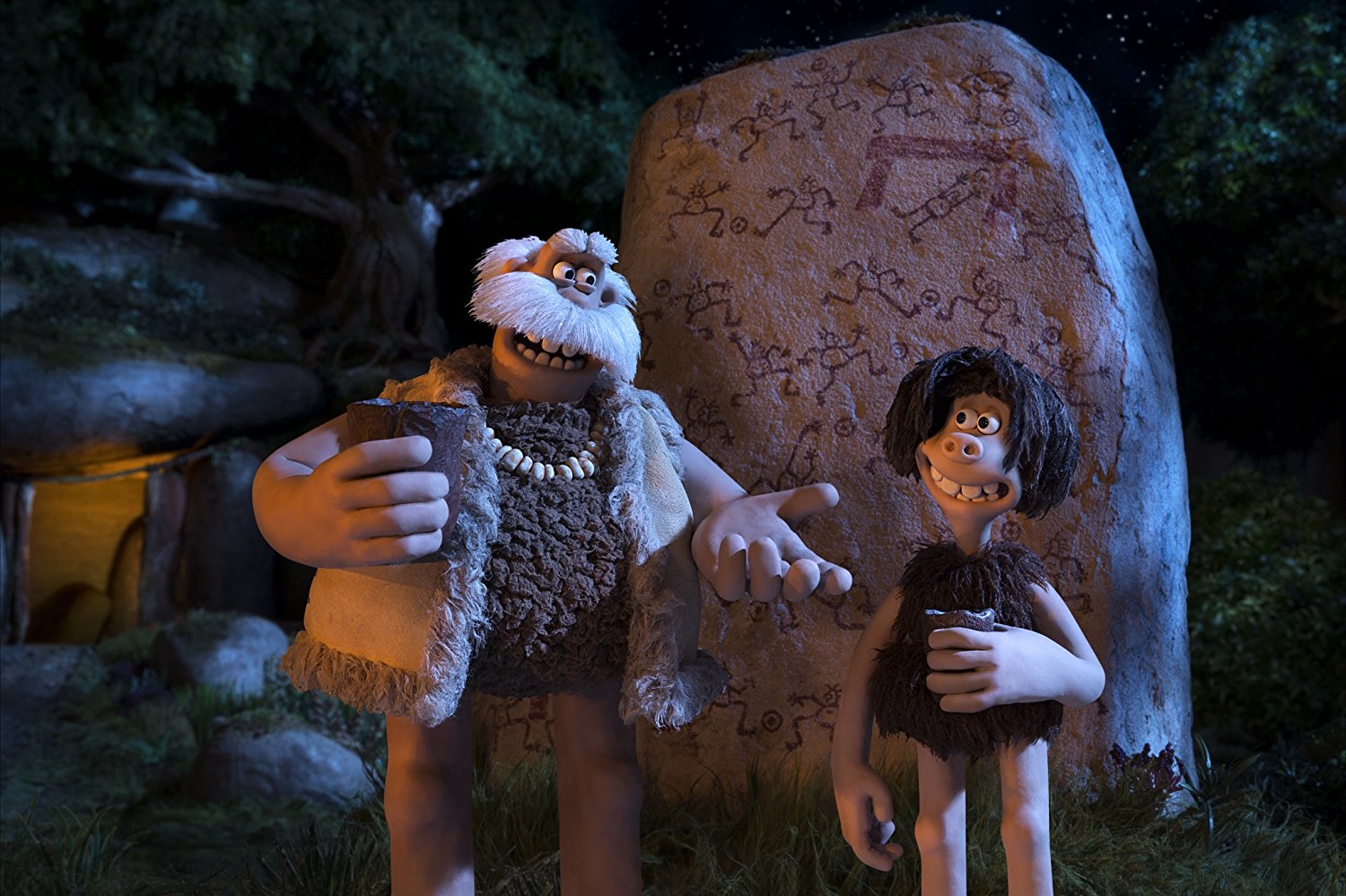 But nothing is new. Dug and Hognob, in their shape and recognisable teeth, look and seem very similar to Aardman’s iconic creations of Wallace and Gromit. There are puns littered throughout the film, and they’ll emit a groan from the audience, but you’ll struggle to get a belly laugh from this pedestrian picture. To make matters worse, it has Oscar-winning actor Eddie Redmayne in the lead role and Timothy Spall, Richard Ayoade, Tom Hiddleston and Maisie Williams in support. The aforementioned silly accents make these memorable voices bizarre to hear too. Ayoade, in particular, is tragically reduced to crying “oh mum” at every embarrassing moment that crops up. This is an actor who managed to inject a cerebral and profound sentiment in Laika’s The Boxtrolls and it appears as if his nasal accent is all that was wanted when he signed on to Early Man.

Laika, creators of Kubo and the Two-String, Coraline and Paranorman, should be an overriding influence on Aardman. Both share a unique visual flair and a quality of texture that marks them apart from CG kid’s movies such as DreamWorks and Disney. Alas, Early Man is barely in the same league; a potentially surrealist “man-eating mallard” stomping the land is only fleeting and the majority is nonsensical crowd-pleasing plot turns. Between Laika and Cartoon Saloon, Aardman could be a British animation house with the same credibility, but instead it plays to the easiest crowd by refusing to offer anything more than daft, but deeply forgettable, characters and jokes. A sincere nod to Ray Harryhausen in the credits is not enough to salvage a film that’ll only leave you stony-faced.