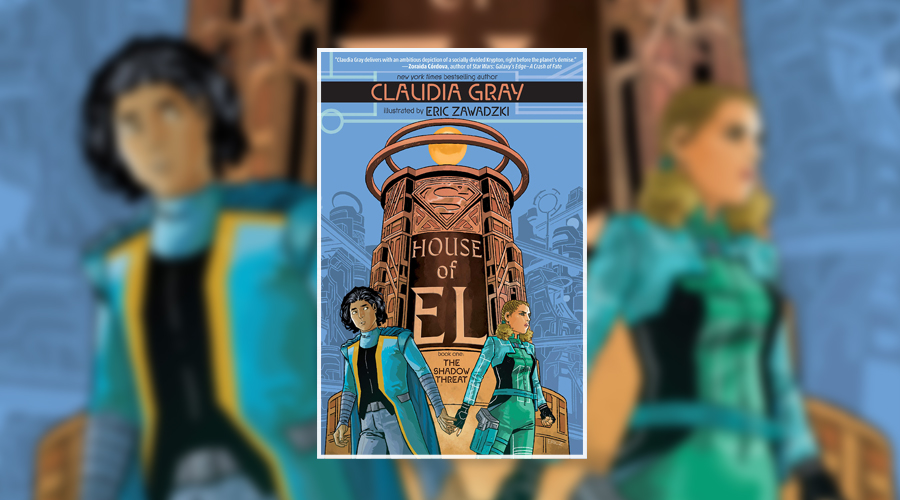 In House of El: The Shadow Threat, the first in a new YA graphic novel trilogy from writer Claudia Gray and illustrated by Eric Zawadzki, we’re offered a grounded look at the last days of Krypton. Through society elite, Zahn, and soldier, Sera, we experience the growing division within the supposedly idyllic Kryptonian existence while the planet itself tremors.

The destruction of Krypton, Superman’s home planet, is a core part of the emblematic Justice League hero’s story. An advanced scientific and technological society, it was close to its apex and so a sense of great loss surrounds what could have become of the Kryptonians had they continued to develop. The Shadow Threat spends more time than most other DC instalments of the story in the run up to Krypton’s end, pushing the demise into the background in favour of unravelling that flawed society and its impact on its people.

Gray and Zawadzki’s version of the last days of Krypton examines the depths and complexities of an advanced civilisation and the allowances made for purported perfection. The Kryptonians have developed but haven’t stopped to ask if it’s the right way forward.

The art style uses soft blues, greens and oranges as its core palette, creating a washed out world with intricate yet bold line details that instantly evokes the metallic constructs of circuits and forged structures built to last. It has a classic comic book style to it, focusing on a simple style and sepia filter akin to flashbacks in TV shows.

In order to better understand Krypton society as a whole, we get contrasting viewpoints from the frontlines of their expansion to terraform new worlds and deep within the city where genetic engineering experiments are secretly underway and political unrest grows.

One of the protagonists of House of El, Sera, and her fellow soldiers, are born within a class that defines their role as pawns, so much so that they have been genetically engineered to be better soldiers. They experience less fear and less empathy. Death doesn’t phase Sara, at least until she becomes part of an experiment to rewrite her DNA.

The other lead, Zahn, has a very different existence. Within the upper echelons of Kryptonian society are the leaders and politicians, and this is where he resides. His privileged life exists literally in the tallest building, away from any signs of poverty, which he has to reckon with in order to gain the trust of a rebel group whom he meets in the crumbling belly of the city.

Both Zahn and Sera carry out their assigned roles and separately begin to question why they follow their paths so willingly, leading them to team up by the end of this first volume and go in search of answers to why Krypton is experiencing such unprecedented geological changes and how the people of Krypton could be so accepting of what feels like an upcoming cataclysm.

House of El: The Shadow Threat is an interesting look at Krypton and one that DC lovers and fans of the Superman story will find plenty of intrigue in. It has a freshness by taking unknowns from the world of Krypton and focusing on the reflections of Western society through the harsh divide between the haves and have-nots. It is an inventive world, with what feels like a fully realised society, even if it is a tad predictable, and works well for a YA audience.

House of El: The Shadow Threat was published by DC Comics on 5 January 2021