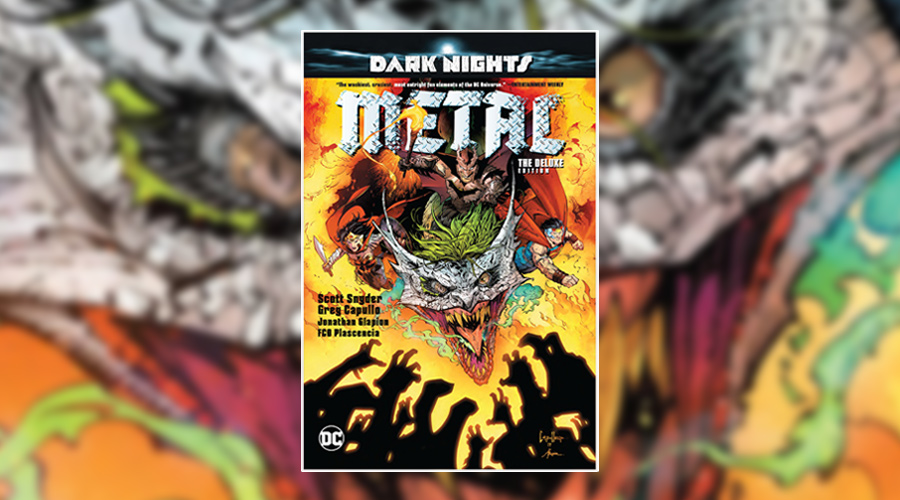 From when I first heard about Dark Nights: Metal I feared immediately that this would be another Batman-centric event. Not that there is anything wrong with Batman – he’s actually one of my favourite superheroes – but the need to portray him as the best thing in the DC Universe can get quite tiresome. Thankfully, at its core Metal is an event about teamwork and unity that sees the Justice League realise they are stronger together then they could ever be apart.

This is evident from the first issue, which opens on the League trapped in an arena against seemingly unbeatable robots. Through a (hard to describe) series of events, the team merge with these robots before forming a giant robot constructed of all the different parts – think the Megazord from Power Rangers. Metal isn’t afraid to explore the weird and crazy parts of the DC Universe, instead choosing to embrace them and bring them to the forefront.

The threat at the heart of the event is an ancient Batgod named Barbatos, who sinks worlds into darkness and creates dark worlds full of people’s worst fears. This mostly takes the shape of Batmen from other worlds, with a particular focus on The Batman That Laughs – a version of Bruce driven mad who kills without remorse and travels with a bunch of chained up feral Robins. The League travel across the universe to find various kinds of rare metals that are said to be able to defeat Barbatos, which the Batgod is also trying to use to enter our world.

Scott Snyder’s long-running artist Greg Capullo gives life to this frankly insane event, bringing forth a wide variety of mad concepts. His pages are easy to follow and expressive, with so much happening on each panel. As the series wraps, things only get crazier but Capullo is able to ride with it, making his designs all the crazier.

Much of the latter part of Metal focuses on Wonder Woman as she is left as the last remaining Leaguer on Earth to attempt to beat back Barbatos, whilst Superman and Batman search for a way to beat him. The focus on her is one of the stronger parts of the event, with Snyder getting to the heart of Diana as a bringer of truth, the truth that everyone is loved and worth it. Diana is shown as the heart of the League and the one who will never stop fighting for what she believes in. It’s her rally cry that reassembles the Justice League and allows the team to come up with a plan to save their world.

As a whole, the event does a good job of balancing the crazy elements with its focus on the team, making for a fun event with far-reaching consequences. The ending of Dark Nights: Metal sets up what’s to come next, introducing a whole swath of new concepts to the various DC books. Reading it has me more excited about the publisher for the first time in years, and I can’t wait to see what comes from them next.