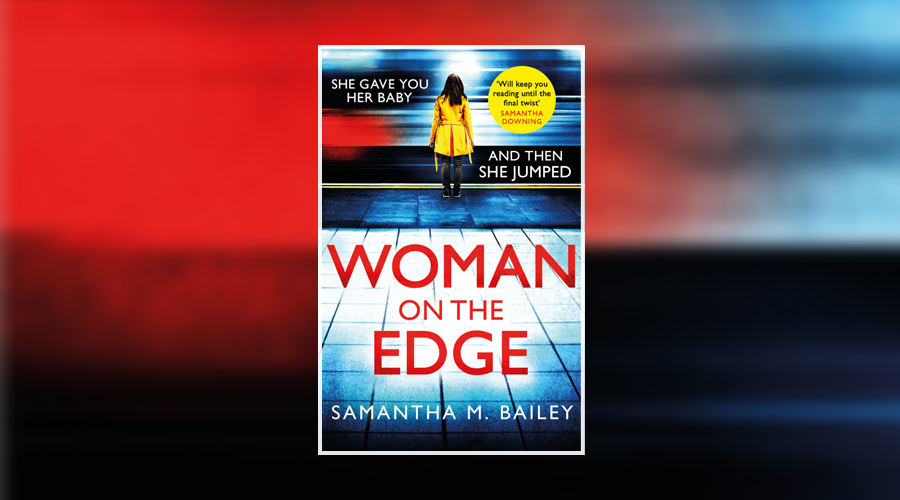 From its first line, Samantha M. Bailey’s Woman on the Edge is instantly gripping, offering readers a killer hook and an instant immersion into the dark, tense and riveting world of this debut. Just like the readers, Morgan Kincaid is jolted into this new world order unexpectedly one evening while waiting for her train home, when a woman she’s never met places a baby in her arms, calls her by her name and asks her to look after her daughter before jumping onto the train tracks.

As openings go, Woman on the Edge offers a break-necked introduction to its compelling world, and for Morgan the horrors are only just beginning. When no witnesses come forward to corroborate her statement, it’s not long before Morgan’s viewed as a suspect and so, in a bid to prove her innocence, Morgan sets out to retrace the last days of the woman’s life and understand why the wealthy, confident and successful Nicole Markham would take her own life and ask a stranger to care for her daughter. But the more she uncovers, the more it becomes clear that Nicole believed that she and her baby were in danger – and now Morgan could be facing that same danger too.

There’s no denying that this novel has an absolutely brilliant beginning; from the get-go it’s suitably atmospheric, the tension is palpable and there’s a lot of intrigue to keep a reader guessing, all of which is heightened in the novel’s dual perspectives of the ‘Before’ and ‘After’, allowing readers to try to make links and connections as they go. Unfortunately, the strong premise and early promise is ultimately let down by its execution, with the story getting increasingly far-fetched and edging into the realms of unbelievability as it goes on.

It’s difficult, too, to suspend your disbelief enough to enjoy all of the novel’s many twists and turns when you consider just how quickly everything escalated – from the moment Nicole and Morgan met in the subway to the final reveals and everything that happened in between, the majority of the present day action appeared to unfold over the course of two or three days. Morgan herself also didn’t necessarily evoke reader sympathies when she kept ignoring those in charge of the investigation and inserting herself into situations that were way beyond her remit, only really serving to make things much worse for herself and those around her.

However, if you can forgive Morgan’s frustrating behaviour and what seems to be a very incompetent police investigation (complete with a bias lead detective who has a tendency to spill all the details about the involved parties to anyone without prompting), then Woman on the Edge has a lot to recommend it. Following in the vein of Catherine Steadman’s Something in the Water, this novel offers pure, soapy thrills, along with plenty of action and dramatic revelations. Nicole’s story of the ‘Before’ is by far the stronger of the two narrative threads, but one thing the whole novel definitely doesn’t lack is strong pacing, whipping through each woman’s story with short, punchy chapters and, more often than not, a cliffhanger that guarantees you never forget about one woman while catching up with the other.

A strong start is let down by a middling conclusion, but with its thrills and excess, Woman on the Edge is certainly an entertaining novel and a strong debut, despite a rushed denouement and a villain who lacks clear motivation. It doesn’t hit every beat it hopes to perfectly, but it’s very likely that once you start reading, you won’t want to put it down again until you’ve raced through to the final page.