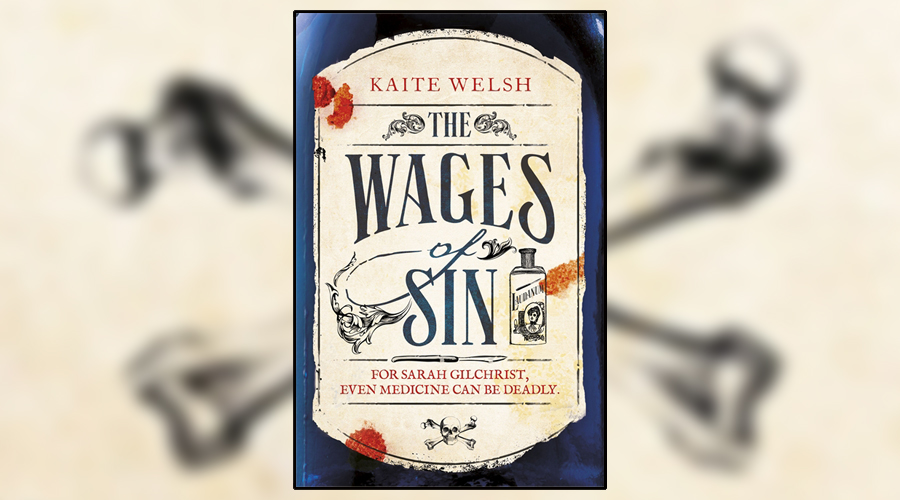 Inspired as a student by a plaque to Sophia Jex-Blake, one of the first women to study medicine at Edinburgh University and the first practising female doctor in Scotland, Kaite Welsh couldn’t have chosen a more fascinating overarching theme for her debut novel. The Wages of Sin is at once an illuminating exploration of the oppression women faced in Victorian times and a gripping gothic murder mystery.

The influence of Jex-Blake’s life and work is central to Welsh’s story, which takes place in 1892, where the city backstreets are rife with disease, prostitution and all manner of dodgy dealings. Far away from the murky alleys, in the halls of the male-dominated Edinburgh University, Sarah Gilchrist is one of only a small group of female students embarking on a career in medicine. Not only is she still trying to forget the social scandal that chased her out of London but she also has to do daily battle with men who think women have no place getting a university education, let alone having a profession outside of being a wife and a mother.

It’s not just the men who give Sarah a tough time. Her female contemporaries treat her like a pariah, with word of her public fall from grace following her around like a dark cloud. Sarah is bright, headstrong and resilient, taking comfort in her studies and her voluntary work at a clinic for the poor and underprivileged. So when she discovers the bruised corpse of one of her patients in the university dissecting rooms, Sarah suspects that the girl’s suicide was staged to cover up a murder. But nobody cares about another dead body, even less so when she’s a prostitute.

Feeling a strange sort of kinship with the deceased girl, Sarah steps into the dark underworld of brothels, body snatchers, illegal procedures and social prejudice to seek out the truth. However, it’s not so easy to play detective when you suspect your professor could be the murderer and your family want to marry you off to the first eligible man who shows the slightest hint of interest.

“The operating theatre is no place for ladies. If you must abandon both your upbringing and God’s plan for you, kindly do the same with your delicate maidenly sensibilities.”

The Wages of Sin is exactly the type of historical mystery book I love to read, one that features a protagonist who’s way ahead of her time. My favourite Victorian adventuress in fiction is Deanna Raybourn’s Veronica Speedwell, and Sarah Gilchrist is every bit her feisty, feminist equal, totally unable to stay out of trouble. In fact, Sarah actively looks for it and that’s half the fun – she’s always out of her depth, on the cusp of danger, and she never backs down.

What Welsh does so well is maintain a feeling of relevance and modernity, despite the fact the story is set in the 1800s. My blood boiled at the way the female demographic were treated by the majority of male students and professors – like they are dainty little flowers who couldn’t possibly be bright or robust enough to wield a scalpel. This prejudice and gender discrimination is all handled with a delightful sense of fun, a feeling of the women banding together and saying, “Don’t think I can do this? Just watch me.”

The period detail and descriptions of the grimy backstreets and seedy brothels paint a vivid picture of a city of two halves – the main thoroughfares where the respectable upper class ride in their fancy carriages and the dark alleys, where prostitution and opium dens are just the start of the horrors that lurk in the shadows. The murder mystery side of the story is so well handled that I had no idea where it was going to lead and, like Sarah, I was genuinely taken aback when the truth emerged.

Entertaining, engaging and eloquent, The Wages of Sin is a promising start to a brand new historical crime series and I can’t wait for the follow-up.