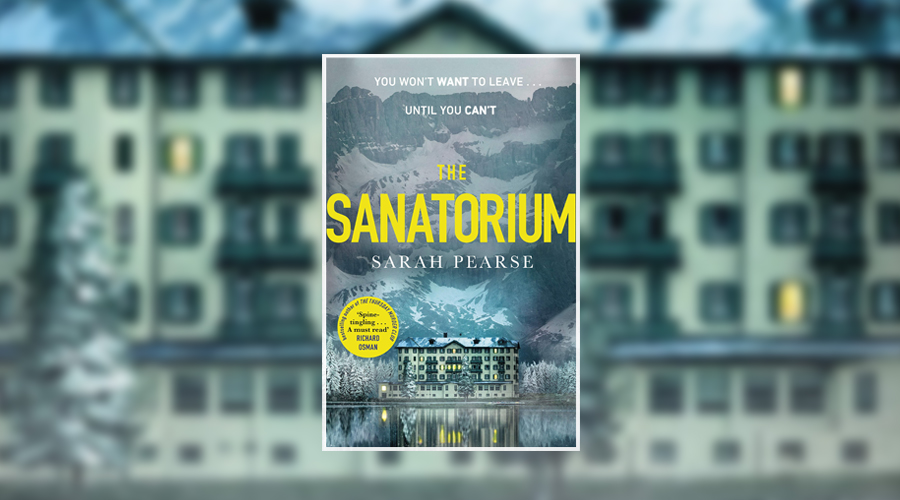 The first half of 2021 is full of sharp, edge-of-your-seat thrillers that keep readers guessing. One of the best this month is Sarah Pearse’s debut, The Sanatorium, a novel that expertly utilises its remote Swiss Alps location to create an unsettling sense of isolation that’ll creep up on you like a physical entity, affecting not just how you perceive the story but the characters that inhabit it too.

When Elin Warner arrives at Le Sommet, an imposing hotel high up in the mountains, it’s the last place she wants to be. She’s on leave from her job as a detective and it’s clear from the offset that she’s suffering from post-traumatic stress related to a case. There are other reasons that Elin feels anxious though. Accompanied by her boyfriend, Will, she’s been invited to the hotel to celebrate her estranged brother Isaac’s recent engagement. The siblings have had a fractured relationship ever since their family suffered a tragic loss, and Elin still blames Isaac for what she believes was his part in the accident.

Adding to Elin’s escalating discomfort is a ferocious storm that strands them in the hotel, a place that holds its own disturbing history and haunting memories. Despite being architecturally beautiful, Le Sommet was converted from an abandoned sanatorium and its ghoulish past still lingers throughout the building. Elin can’t shake her unease and when Isaac’s fiancée, Laure, goes missing, people begin to panic. One missing person quickly turns into two, and Elin realises that the guests and staff are in danger. But with the storm keeping them inside, anyone is a potential next victim, which means everyone is a potential suspect too.

The Sanatorium isn’t a horror story per se, but at points it definitely reads like one. Inspired by the history of sanatoriums in the Swiss Alps, Sarah Pearse creates such an eerie atmosphere that it’s easy to slip into the belief that it could be a ghost tale. Abandoned buildings have always held a creepy appeal and Pearse plays on readers’ intrinsic fears of the paranormal, weaving in disturbingly palpable imagery – featuring some macabre old-fashioned respirator masks – to add layers of tension to the story. What bearing could the hotel’s morbid history have on people going missing all these years later? Unless you’re Hercule Poirot, the answer is impossible to predict.

Being unpredictable is The Sanatorium’s greatest strength. There’s no way to tell where the story is going to go, who’s going to go missing next, or who might be behind the vanishings. Another strength is the book’s damaged protagonist, who finds her perspective as a detective being clouded by traumas, both as a child and in the not so distant past, as well as her distrust towards her brother. From Isaac and Laure to the hotel’s owners and staff, Pearse gives readers plenty of reasons to suspect everyone Elin comes into contact with. The only person we can truly trust is Elin, and even her memory isn’t as reliable as she might think it is.

Sinister, suspenseful and superbly unsettling, The Sanatorium ticks all the boxes for a completely compelling novel. If you love unnerving thrillers and you’re keen to support more debut authors this year, then be sure to add Sarah Pearse to your reading list.

The Sanatorium is published by Bantam Press on 18 February 2021