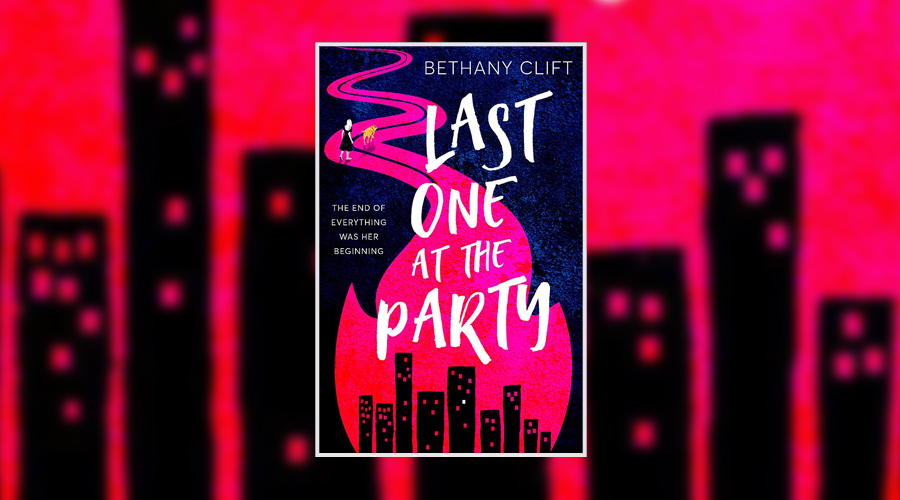 The thought of reading about a devastating global pandemic, during an actual global pandemic, isn’t immediately appealing. When so many of us read to escape reality, surely we wouldn’t want to subject ourselves to a book that takes everything we’ve spent over a year agonising over and spins it into a story that’s somehow even more terrifying. Right? In the case of Bethany Clift’s Last One At The Party, that’s exactly what I wanted to do. Because this isn’t a story of the end of the world, this is the story of what happens next.

It’s November 2023 when the human race succumbs to a virus called 6DM, which stands for Six Days Maximum – the longest you’ve got before your body essentially melts from the inside out (nice, I know). At first it seems as if the UK – being an island nation with the capacity to isolate itself – might be able to withstand the virus. Unfortunately it doesn’t, and soon the country, as well as the whole world as we know it, is decimated. Yet in London, one woman is still alive, and it turns out her will to live is stronger than she thought it was.

As the sole survivor of the apocalypse, our unnamed protagonist has to learn how to exist in a world without human contact, with only a trusty golden retriever as a companion. Moving between the past and the present, we get glimpses into how the woman has spent her life compromising; moulding herself to be what she thinks other people want her to be, pretending to be happy when she’s falling apart inside, and drifting through life feeling miserable, anxious and lost. It’s only when she’s faced with the end of the world that she’s able to look back at the important things she let go and the broken things she clung on to, in order to understand who she really is and what she really wants.

You might wonder why all this matters, when it’s too late for her to change anything. She can’t quit the job she hates and pursue the career she always dreamt of. She can’t make amends with the best friend she alienated. She can’t tell the people she cares about most that she loves them one last time. It’s all so hopeless and yet this is a story that’s about finding hope. When everything narrows down to the basic need to survive and stay sane, all the inconsequential things slip away, allowing the woman to exist as she wants to exist. Nothing is holding her back any more. Of course, nothing is holding her together either, and her struggle is as much a psychological one as it is physical.

The tone of the book veers between amusing and sad, irreverent and macabre, as it explores what it means to be alive. Our protagonist isn’t a heroine in the traditional sense, and she isn’t always an easy character to identify with or like. Yet from beginning to end, you can commiserate with her. She’s lost everything. She’s alone. She could live out the rest of her days like that. It would be so easy to give up. Yet she doesn’t. She keeps going. And going. And going. It’s an admirable quality, though one she herself would call selfish or cowardly. In actuality, to keep moving forward when all you want to do is curl up in a ball and pretend none of this is happening is the biggest act of strength there is.

Last One At The Party is at times horribly bleak and brutal. Our present situation – and the fact that the story references it – makes it all feel very real and scarily possible. It’s not going to be the kind of book that everyone can read – or indeed want to read – at this current moment in time, but there’s so much that resonates beyond the overarching pandemic theme. Clift has written a story that feels uniquely personal to its female protagonist. For all her lows, there are genuine highs, and for all her fears, there are wonders to counterbalance the desolation of her situation. And special mention has to go to Lucky, the loyal golden retriever, who’s the true hero of this story. If the pandemic has taught us anything, it’s that animals can be our saviours. We all need a Lucky in our lives.