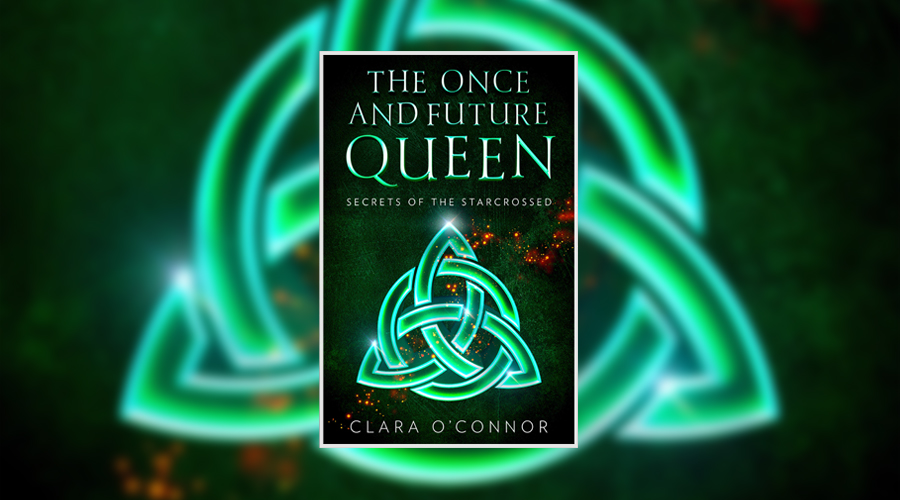 A good idea doesn’t ensure a great book. Such is the case with The Once and Future Queen: Secrets of the Starcrossed. Despite the promise of a grand romance, an invigoration of magic and adventure, set against an ancient Rome twist on the Britain we know today, it falls flat in all aspects.

The first in Clara O’Connor’s Celtic-inspired alt-history series is set in Londinium. The Roman Empire didn’t fall and so Britannia is divided between the Britons in the north and east and Romans in the south-west, in a centuries-long tenuous truce. The walled city is powered by technology, while the rest of the country embraces their magic and lives, at least according to those in Londinium, a simple and more savage way of life. When early-twenties student Cassandra has a chance encounter with Devyn, a classmate she’d never really noticed before, she starts to make unexpected choices which startle her, including concealing forbidden tech from the Sentinels, enforcers of the government. She connects with Devyn, who is searching for a missing child, and joins his illegal activities. Yet, she also tries to remain an upstanding citizen who follows the Code of the city, while staying on her path to marrying the high ranking man she has been promised to.

Naturally for a fantasy leaning YA novel, there is a conflict filled romance. Cassandra is promised to upstanding, society approved Marcus Courtenay, but is drawn to dark and mysterious Devyn. The pseudo-love triangle at the centre of this novel reeks of toxicity, with physical and sexual manipulation that feels utterly coercive, even when that is presumably not the intention. And this doesn’t even cover the actual mind control devices in the story. Cassandra manages to be almost entirely without agency, despite taking action at points. The envisioned future Roman Empire lacks a richness, though clearly has referential touchpoints, and the magic we see – admittedly perhaps more minor in this first book due to it being the first in a series – is sparse and largely unexplored.

In Devyn, we have the worst of romance novel love interests, who ensures he and Cassandra have less of a will-they-won’t-they romance and more of a take-me-now-or-throw-me-away-forever Fifty Shades kind of relationship. Meanwhile Marcus is the pinnacle of privilege and has everything going for him in Londinium, and yet somehow manages to be the most grounded and sympathetic of the central trio. He has a family line of note but wants to be a doctor who helps the rich and the poor – yes, helping the poor is his off-piste likeable quality and that’s how much we are scraping the bottom of the barrel here.

Perhaps all these characters could be forgiven as standards and tropes of the genre, if it weren’t for the odd style that Secret of the Starcrossed is written in. One would expect O’Connor to either commit to a modern dialect with some additional ancient Roman terminology in place of their modern equivalents, or to commit to an ancient sounding vernacular that would reinforce the alt-history world we are in. What we get are odd sentence structures, including a few terms like forum and amphitheatre, and then strangely colloquial phrases like ‘spill the beans’ peppered in. Add to this that Cassandra’s narrative voice manages to be at odds in itself, with her internal voice mismatching with her actions and outside voice, and the two iterations sometimes swapping in a manner that doesn’t seem intentionally stylistic. Granted, in the latter half of the book, in relation to the mind control, we do get some interesting switches in voice that work much better. Early on though, it is a struggle to comprehend.

Secrets of the Starcrossed has a clearly thought-out structure, but what it comprises of and how it is put together lacks depth and inventiveness. If you’re fond of the more basic YA-fantasy series focused around a romance, then this could be right up your street. For those with a more progressive hope for genre novels, you’ll likely find this first installment in the Once and Future Queen series lacking.

The Once and Future Queen: Secrets of the Starcrossed is published by One More Chapter on 21 January 2021