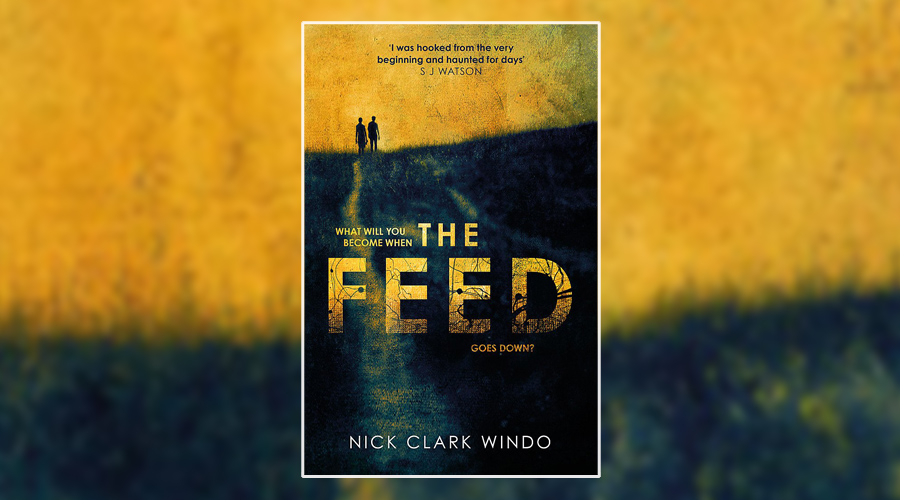 Nick Clark Windo’s debut The Feed is a complex and thought-provoking high concept thriller that asks a simple question: what would you sacrifice to save humanity’s future? However, in a world that’s collapsed following a devastating digital breakdown, nothing is quite that simple, and the things you must sacrifice for the greater good are inevitably the hardest things to let go of.

Six years following the collapse, Tom and Kate Hatfield are fighting for survival with their young daughter Bea and a small group of disparate people who found each other amidst the chaos and confusion. With the opening chapter of the book revealing the moment their technologically advanced, digitally dependent world dissolved, the story quickly establishes an eerie sense of threat that surrounds the survivors’ makeshift camp.

Dwindling supplies are their immediate concern, and whilst strangers are to be feared, the bigger danger is what happens when people close their eyes and fall asleep. Something is lying in wait, ready to take over resting minds. And if your mind is taken, you’re lost forever; nothing can save you. The survivors take it in turns to watch each other sleep but as Bea turns six, Tom and Kate realise they can’t keep hiding the truth from their daughter. In a post-apocalyptic world, there’s no room for childhood innocence.

It’s not long until the camp refuge is infiltrated and Bea is kidnapped, sending Kate and Tom on a mission to find their daughter before it’s too late. What unfolds is a cross-country journey that’s both frightening and harrowing, as the characters’ bodies and minds are pushed to the brink. Windo imagines a world where human consciousness is directly linked to machines and information is constantly streamed to people like a regularly refreshed twitter feed. But what happens when the plug is pulled on that information?

The Feed has definite echoes of The Walking Dead, with the characters attempting to make a new life for themselves following a terrifying apocalypse. Yet this is a story that seeks to ask much bigger questions than TWD does – ones that aren’t solved by shooting guns at your adversary. The threat here isn’t as obvious as walkers, but a hidden danger that attacks when people aren’t able to defend themselves is so much worse. How can you protect the people you love against an enemy that can’t be seen?

It’s not until the final third of the book that the scattered puzzle pieces start to form a whole and the story takes a turn towards a Black Mirror-esque cautionary tale about technology and our treatment of the planet. It’s a slightly jarring tonal shift if you’d imagined, as I did, the enemy as a different kind of threat, but it does lend the story a very powerful and stirring denouement. Windo has the ability to keep surprising readers and he’s not afraid of killing characters off, which gives the entire book a fraught, changeable feel.

This is a bleak and unflinching story that verges on downright miserable at times, but Windo manages to inject small moments of hope and human courage into it which will make you take a long, hard look at our own reliance on tech, social media and the internet. The fact that it doesn’t feel implausible is what makes it even more scary.

The Feed was published by Headline on 25 January 2018