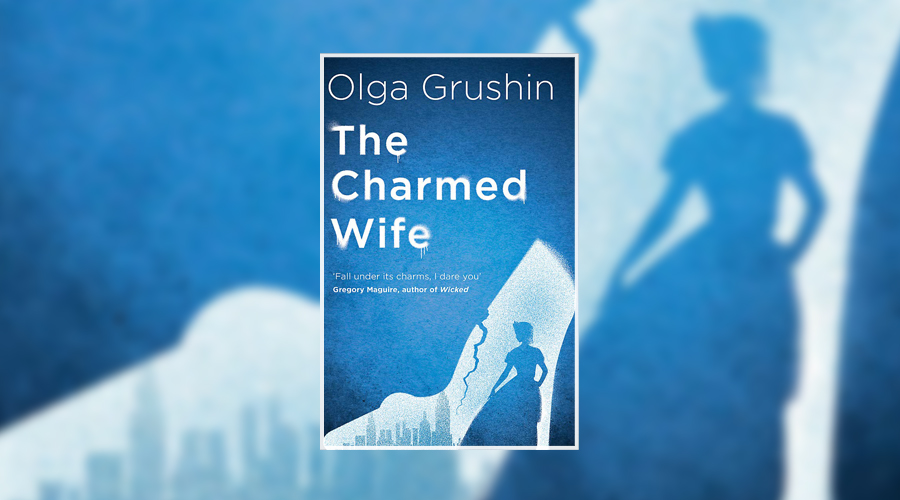 The Princess has every reason to be happy. She’s a princess after all, with a handsome husband, and two beautiful kids, and an enormous castle full of servants to attend to her every desire. Over her married life with the prince, however, doubts about her seemingly perfect world have started to set in. Each year he has become more distant; latterly, downright malevolent. She wonders where he goes all the time. She sees things, and he tries to make her think that she hasn’t. However wonderful her life may appear, her lived truth is entirely different. And so late one night, she leaves the castle and heads to visit the local witch, with a murderous potion on her mind…

All that is only the beginning of Olga Grushin’s The Charmed Wife. Over the following pages, we trace the deterioration of the relationship between the royal couple, exploring just what happened to tear them apart. Along the way we wander into unusual versions of fairy tales like Hansel and Gretel, Sleeping Beauty, and Snow White and the Seven Dwarves, discovering different takes on stories that we thought we knew so well.

There’s a lot to like about The Charmed Wife. Grushin’s love of the tales she toys with is plain to see, and we never know which is going to pop up next. There’s an episodic nature to the cameo appearances of these fairy tales that sometimes makes it read like a collection of short stories – once we are done with each one, we rarely meet those characters again. Whilst these cameos are enjoyable, the best parts of the book are the continuing adventures of Brie and Nibbles, the Princess’s pet mice. In sporadic dispatches from the mouse kingdom, we learn that ‘Brie’ and ‘Nibbles’ are actually titles assumed by a litany of different mice, who meet a variety of grisly fates as their kingdom undergoes wars and revolutions aplenty. All of this is happening entirely unbeknownst to the princess, who is convinced they have been the same mice the whole time.

Yes, there’s a lot to like about The Charmed Wife – it’s just a shame that the Princess herself is so low down that list. Every time we leave Brie and Nibbles to head back to the tale of the Princess and her terrible marriage, I found myself a little disappointed. As the book opens – to quote the chapter title – ‘close to the beginning of the end’, we know the general direction in which things are heading. It’s not much fun waiting for her to catch up with us.

As we head into the closing chapters, we’re hit with a big twist. To call it predictable would perhaps be unfair, but it is heavily foreshadowed. After the reveal, we are forced to reappraise what we’ve been told, and this process is also rather tedious, especially as Grushin has a frustrating tendency to over-explain her metaphors. The ultimate moral – embrace life’s messiness! – is important and true, but I would have happily swapped the whole concluding section for one more dispatch from the mouse kingdom.