Book Review: The Case of the Fool by E. V. Harte 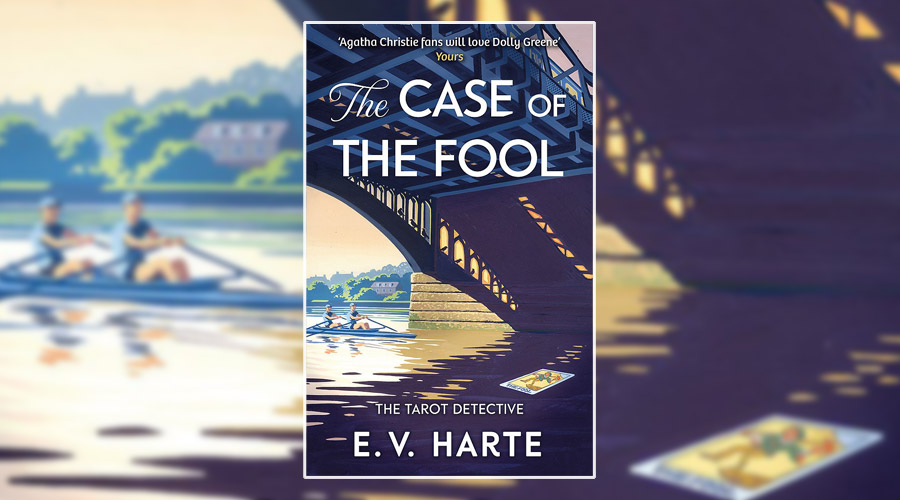 Following The Prime of Ms Dolly Greene, E. V. Harte is back with her second Tarot Detective mystery, The Case of the Fool. Fans of her first novel will be delighted to return to south west London and join Dolly as she’s drawn into yet another chain of unusual events.

Dolly Greene is a Tarot reader with an exceptional intuition. She bought her tiny house, Number 2, Tinderbox Lane, after her divorce settlement, and lives there with her 22-year-old daughter, Pippa. The cul-de-sac is tucked away somewhere deep in Barnes, surrounded by a network of smaller streets with a mixed assortment of neighbours who look out for each other. When Dolly returns from a trip to St Lucia with her handsome police sergeant boyfriend, Raff, she arrives home to find Pippa has booked her a new client, who’s waiting for Dolly in her ‘consultation’ room, aka the broom cupboard.

Dolly is thrown in at the deep end when she spreads out her cards on the table in front of Marina, a surly Russian girl with watchful black eyes. As the cards are turned, they reveal a cocktail of exploitation, dependency and death. Looking for answers, Dolly subtly tries to extract more clues about Marina whilst absorbing the implications of her cards, but feels duty bound to tell her that the marriage Marina is hoping for would neither be happy nor safe.

With the disagreeable Marina on her way, Dolly reunites with her neighbours and discovers changes have taken place in the tight knit community whilst she was away. At the top of the list is the new and unwelcome presence of squatters in an empty house. A new guest nicknamed Professor Filthy, aka Derek West, is also now residing amongst them, and a mysterious Brazilian woman has moved in next door.

Events soon escalate and Dolly’s antennae continue to twitch as the death card plays on her mind. While she and her neighbours hatch plans to send the squatters on their way, a series of unfortunate incidents take place, which galvanize Dolly into action.

What I liked most about this book is how Harte developed her characters so well from the first novel. Dolly’s relationship with Pippa is featured a lot more, and we see the strong bond between mother and daughter being severely tested when Pippa falls for the good looking charms and radical ideas of an undesirable womanizer. Dolly’s character is as clever as she is insightful, and she has to dig deep into her psychic visions, whilst simultaneously trying to shield her daughter.

I also enjoyed the wonderfully eccentric – and at times hilarious – Professor Filthy, whose character in the first book was barely tolerated, but who seems to have come full circle and is now a knight in shining armour to Dolly’s recently abandoned neighbour, Rosie. Filthy’s character is both animated and quirky, and whilst previously he appeared devoid of the normal filters required for polite conversation, his developing relationship has brought to the fore a new and endearing dimension to his personality. This added to my overall enjoyment of the story and made the novel much more engaging, despite the content sometimes being disquieting.

Having read Harte’s first novel, it was like returning to my favourite TV series, full of wit and wonderful characters that you can imagine living in your own neighbourhood (though hopefully not the squatters!). With a fast moving plot driven by Dolly’s warmth, charm and psychic aptitude, The Case of the Fool provided surprises right up to the end.