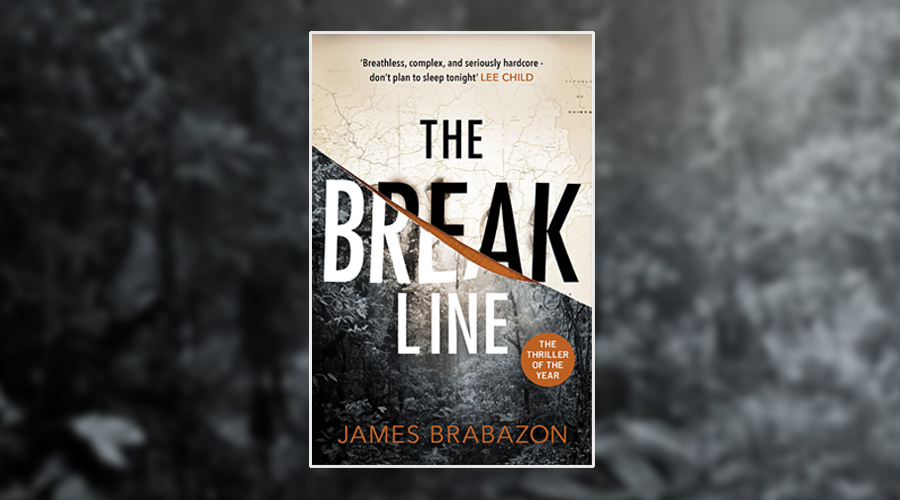 Bold, visceral and incredibly vivid, there’s no doubting that The Break Line is a debut that leaves an impression. James Brabazon’s first novel draws readers into a world of assassins and espionage, a world that’s rife with tensions and betrayals as our main character begins to doubt the orders his superiors are giving him. What follows is a jam-packed thriller of a plot that deftly balances intrigue with action, making for a novel that, once you get going, is extremely hard to put down again.

Max McLean is a killer – albeit, a state-sanctioned killer – but on his last mission he questioned his orders and failed to take the crucial shot, instead helping the intended target skip town, resulting in a world of mess and one last chance from the British government to prove he can still do his job in what’s billed as his final mission. Armed with only the vaguest of details and information from a new and unverified source as his mission brief, Max is dispatched to West Africa, where a rebel army and its evil genius of a leader threatens to grow out of control.

While in Sierra Leone, Max’s cover is compromised almost immediately, and he faces a dangerous mission into the unknown that forces him to question everything he thought he could believe in. Add to that the fact that the only other person who’s seen what Max is going up against was later locked up in a military research facility for his own protection and offered Max an ominous warning before he died, and it’s not long before Max realises there’s more to this final mission than anyone has told him – and he is determined to find out why he was the one singled out for this particular mission.

“Fear: it was the be-all and end-all of everything we did. But whatever had sent Sonny Boy mad hadn’t just scared him, it had terrorised him into utter madness.”

The Break Line is a gripping read, as much for its abject horror as its unpredictable plot line. Despite being slow to get going and heavily weighed down with overly-technical military terms, the novel does eventually hit its stride when Max finds himself having to go it alone in Sierra Leone, and from there on out it becomes a tense and riveting page-turner as Max navigates obstacles and life-threatening situations by the bucket load.

The novel does take a couple of narrative leaps of faith at times, leaving readers feeling jolted and unsure about how we reached certain twists in the plot, with no real explanation given before ploughing on into the next impossible situation to traverse. This book isn’t for the faint-hearted either; it’s gory and violent, rendering injuries and wounds on the page in an excruciatingly vivid fashion – from eyes trailing out of sockets to limbs being savagely torn off – all captured as authentically as possible, no doubt aided by the author’s tapping into his journalistic background and attention to detail.

It’s clear, though, that a lot of thought, research and experience went into the crafting of this novel, and its lead character is compelling enough to provide someone to root for among the cast of suspicious, questionable and even somewhat deranged individuals populating the rest of the novel. No matter how many horrific situations Max finds himself in, he’s never out of his depth, and the reader is constantly gripped to the page wondering how he’ll handle himself as each new problem arises.

By its very nature, The Break Line is a hard book to pin down into one category, edging from spy thriller, to military drama, to science fiction and back again all in a single chapter. Flaws and slow-starts aside, this novel is at its best when it sticks to the exploration of covert operations, and, for the most part, it remains a gripping read throughout. Assuming you have a strong stomach for violence, The Break Line brings something new to the literary scene, and earns its merit in an adrenaline-fuelled second half that makes up for a stilted start and some of the more soapy plot twists.