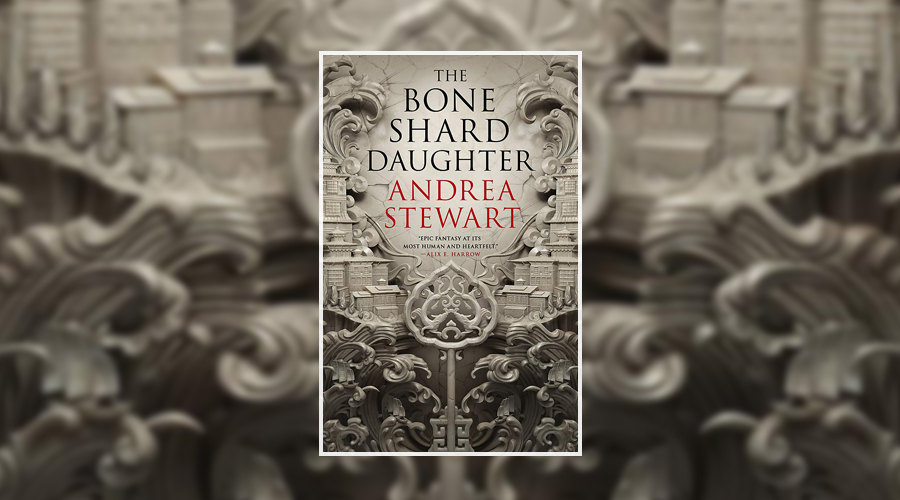 In The Bone Shard Daughter, Andrea Stewart has brought forth an intriguing world that has the historical depth and feel of a Greek epic. Weaving several narratives together, Stewart primarily tells the story of the Emperor’s daughter, Lin, a mid-twenties woman with missing memories, and Jovis, a smuggler on a voyage to find his missing wife. Each is searching for their purpose, what lies beyond the goals in front of them. It is a journey full of mysteries, ethical choices and more questions than answers.

The Empire in which Lin and Jovis live is a network of moving islands ruled by a magic wielding, cruel and reclusive Emperor. He uses stolen shards of skull bone, taken from his citizens as children, to power hybrid creatures that enact his will and keep order. He does this under the pretence that only he, with his bone shard magic, can protect the people from ancient god-like beings that his family vanquished years ago.

His daughter Lin is training to follow in his footsteps but a mysterious illness has robbed her of memories beyond the last five years. She struggles to earn her father’s respect and the literal keys to unlocking the power of bone shard magic, while being challenged by her adopted brother and rival, Bayan, who seems every bit as determined to inherit the throne as Lin is. In the dark palace, full of monstrous creations, called Constructs, she is alone and becomes desperate to succeed, leading her to investigate exactly what secrets may be hidden around her.

Meanwhile, across the open seas, Jovis is boundless and free. His sole mission is to find his missing love, Emahla, who was taken years ago. Leaving his job as a navigator, he is thrown in with the rebel group known as The Shardless Few, and is forced to confront his increasingly hopeless mission. A professional liar, he wonders if his best lies are the ones he tells himself. A chance encounter and a daring escape from an island catastrophe unites Jovis with Mephi, a creature of unknown origin who fast becomes his closest companion. Mephi also happens to be equal parts adorable and deadly.

Intersecting with Lin and Jovis, we are told the stories of Phalue, daughter of one of the island’s Governors, and her partner Ranami, a local without the privilege Phalue grew up with. Their story delves more into the wider politics of the Empire, where poverty in rife and “gutter children” are commonplace. Ranami wrestles with her love for Phalue and Phalue’s blindness to the inequality on the island and across the Empire, one which she believes can only be solved with revolt.

Peppered within The Bone Shard Daughter, we also follow the curious Sand. This woman’s existence appears to hinge on her role on a small island as a mango collector. A chance fall opens her eyes to the strangeness of her own being and she starts to question who she is and how she came to live on the island.

Stewart is able to paint a vivid and complex world through this collection of scattered characters. Through each we are teased with riddles and unknowns, even as each of the narratives begins to unravel and discoveries are made – some which you might be able to guess ahead of the characters, though not in a frustrating way.

What makes The Bone Shard Daughter such a captivating and fascinating read are the details. The ways in which the Empire, world history and magic are revealed to the readers. The explorations feel more natural as many of the focus characters have a limited understanding or singular perspective. Their growth, as they realise where unfairness in the status quo has been accepted due to imbalances of power or through political trickery, is both a window to this world and a reminder of the inequality that exists in ours.

On one hand, Stewart’s novel is a mysterious fantasy with a good dose of adventure. On the other, it reads like a fragment of a huge and expansive world. If this is the first novel in a series, you can easily imagine what might come next and what other stories there are left to explore, from the ancient enemy of the empire, the Alanga, to the lives of those on the many moving islands around the globe.

Magic. Revolution. Identity. All three are touted as core elements of the series and they are certainly all there. History, justice and fable would be another three words that encapsulate this unique and engrossing story.

The Bone Shard Daughter is a great read for those who like their fantasy with detailed world building, progressive characters (these aren’t just white men with big swords and bigger egos) and intrigue.