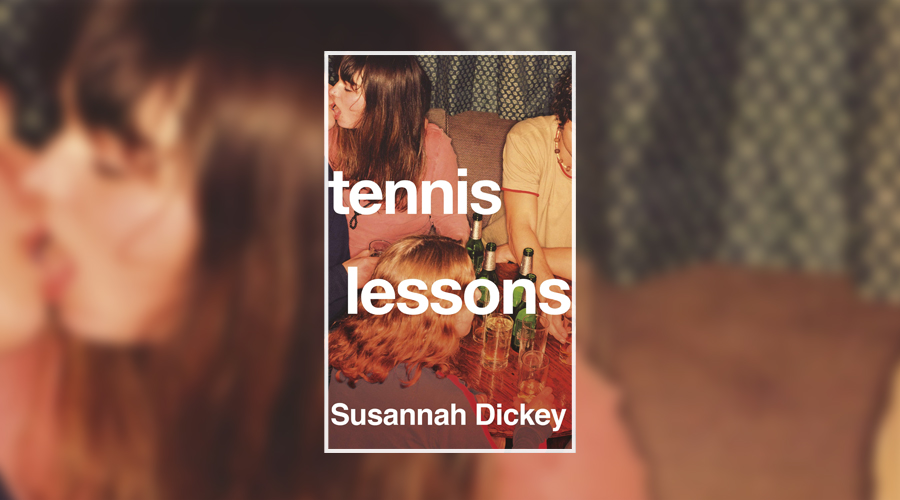 Susannah Dickey’s Tennis Lessons is a coming-of-age novel in the most literal sense. We follow the unnamed protagonist between the ages of three and twenty-eight. Rather than traditional chapter headings, sections of the book are demarcated by how old our heroine is. Sometimes a whole year passes between these sections, sometimes it’s just a couple of minutes. In either case, we watch her grow up, right in front of us.

And because the novel is written in the second person, it feels like we are growing up right alongside her. Using ‘you’ instead of ‘he/she’ or ‘I’ is still a fairly rare literary device, and because it is rare, it takes a little while to acclimate, but not as long as you might think. Dickey’s use of the second person quickly becomes natural, and even necessary: considering the intimacy and interiority of the text, ‘you’ – the very fact that the pronoun demands our empathy, demands that we imagine ourselves in her position – helps to pull us in.

Still, our heroine can get frustrating. As she often admits, she never properly chimes with the world around her and that means that she’s a prime target for bullies. She never stands up for herself. Her mum, who spends most of the novel at loggerheads with the protagonist’s father, is exasperated by her daughter’s quirks and utter lack of ambition. Even her best friend Rachel, who loves her more than anything, has an affectionate pet name for her: ‘weirdo’. It’s a brave, risky move to centre a book around a girl who is both so passive and so strange.

It pays off, however. Despite there being a fair few occasions where you want to shake her, or at least beg her to stop making so many bad decisions, the fact that the heroine of Tennis Lessons often seems like an alien who has recently arrived from a faraway planet makes her a fascinating character. Her peculiarity yields some blessings, along with the obvious curses. She doesn’t appear capable of holding a grudge, which leads to a beautifully and complexly drawn redemption arc for her teenage bully. Our protagonist views the world from a different perspective. Things that everyone else takes for granted – the necessity of taking exams, climbing the career ladder, having a family – she questions. Tennis Lessons sometimes reads as an anthropological study of a distant tribe, only the distant tribe is us. We don’t often come across particularly well, but there’s always the hope of improvement.

Whilst this is Dickey’s fiction debut, she has had poetry published in various pamphlets and magazines. She brings all of that natural lyricism to Tennis Lessons, elevating the ordinary with reams of luscious prose. Nothing that happens is all that exciting or unusual, but the way in which Dickey tells the story – her nuanced characterisation, the poetry of her prose, her use of the second person – gives us the magical ability of seeing this tired old world with brand new eyes. What an invaluable gift, and what a beautiful book.

Tennis Lessons is published by Doubleday on 16 July 2020