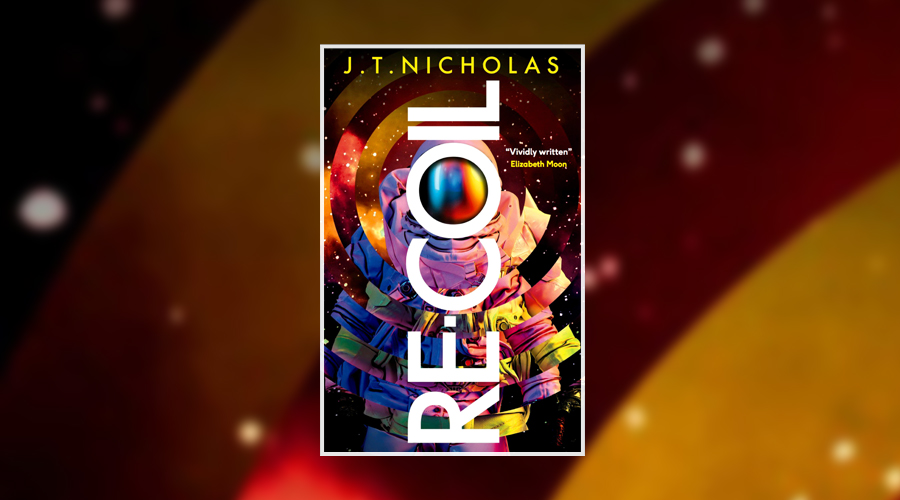 J. T. Nicholas’ mind-bendingly smart sci-fi novel Re-Coil explores the implications and morality of artificial intelligence and immortality in a technologically advanced society. It’s I, Robot meets Altered Carbon as an omnipotent, rogue AI threatens the future of a human race whose consciousness can be backed up and downloaded into a new body, or coil as they’re called here. People can potentially live forever but what happens to their choices and sense of identity when death becomes transient?

Carter Langston is our shrewd eyes into this new world, where interplanetary travel is commonplace and humanity has spread itself across the solar system. When he’s murdered whilst salvaging a derelict vessel, Carter wakes up in the medbay of the space station on which he last backed himself up, having been downloaded into a new coil. But he soon realises his previous death wasn’t an unfortunate accident or anomaly when an assassin breaks into his room and tries to finish the job.

On the run and desperate for answers, Carter manages to track down Shay, one of his salvage mission crewmates who was also murdered and re-coiled, though she’s far less happy with her new body than Carter, having been downloaded into a male form. With their backups threatened and the rest of their crew either missing or wiped from the supposedly unbreachable storage system, Carter and Shay must delve deeper into a corrupt, morally bankrupt system that not only threatens their lives but the whole of humanity.

“Because of the ability to switch coils, the more prosaic forms of bias – perceived race, ethnicity, and gender – had faded. On the other hand, the good old battles of class warfare were still being fought, and if you looked poor in a rich area, you were bound to draw additional scrutiny.”

Unless you’re a regular reader of science fiction, Re-Coil is initially a difficult book to get into. The reason isn’t because it’s badly written or unexciting, but because there’s simply so much scientific, techy speak that you’d have to be one of the main foursome in The Big Bang Theory to not get a little lost or confused. My mind was warping and running round in circles just trying to keep up with everything that Carter was experiencing but it’s to Nicholas’ credit as a writer that I wanted to persist. And I’m so glad I did.

This is a story that kicks off at breakneck speed but the action really ramps up a notch when Carter and Shay reunite and set out to uncover the conspiracy surrounding their discovery on the derelict vessel, which someone is still desperately trying to cover up. On their trail is a merciless assassin called Korben, a character who’s a cross between the Terminator and Tom Cruise’s seemingly un-killable professional hitman Vincent in Collateral. He’s a thrilling creation and every scene he’s in is exhilarating, filled with violence, blood and snarky dialogue.

Re-Coil isn’t all about the action and carnage, though Nicholas does that really well. Like Altered Carbon, there’s a more nuanced tale underneath the visceral thrills, one that considers the quandaries faced when a person’s consciousness is eternal. The ability to recoil has made society more fluid and accepting, with racism and sexism more of a thing of the past, but Shay – a woman forced to exist inside a male body – is a perfect example of someone struggling to hold onto the basic foundations of her identity. The further she gets away from her original body and heritage, the more lost she becomes and her distress is palpable.

Nicholas weaves some relevant themes and thought-provoking ideas into his story with regards to gender and that basic sense of self – of who we are, or who we want to be – that we as human beings instinctively have. It’s this balance between action and the exploration of personal dilemmas that makes this such a compelling, multi-layered sci-fi tale. I wholeheartedly hope that there will be another book following Carter, Shay and Korben – an unlikely fictional trio I never knew I needed in my life until now.

Re-Coil is published by Titan Books on 3 March 2020