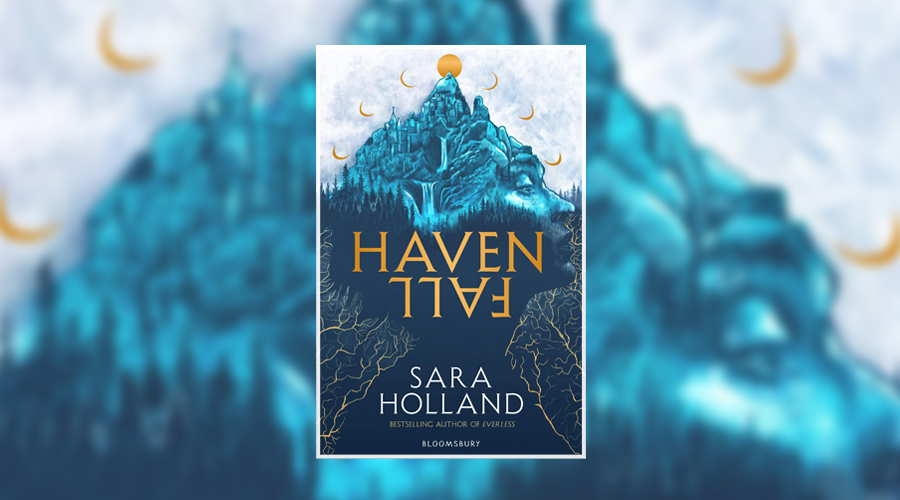 Sara Holland is a name all devoted YA fantasy readers will be familiar with. The American author’s debut, Everless, gained her a New York Times bestseller status, not to mention a legion of loyal fans. Now she’s back with a brand new contemporary fantasy series that takes its name from the book’s setting, Havenfall, a hidden gateway to other worlds, some of which have been long sealed by ancient magic, and a safe haven for different factions who were once at war with each other.

Maddie has always dreamt of one day taking over the reins from her Uncle Marcus, the current innkeeper at Havenfall. She’s lived a human existence in the human world, but her summers at Havenfall gave her a glimpse of what life could be like. With her brother dead and her mother on death row for his murder, Havenfall isn’t just a safe refuge for denizens of other worlds but for Maddie too. This is the place she feels most at home, so when a gateway is broken open and a body is found on the inn grounds, she feels duty-bound to preserve Havenfall’s delicate accord.

Forced to step into the role of interim innkeeper, Maddie has to confront shocking realities about the dangers that lurk within the confines of Havenfall. At the same time she’s grappling with her conflicted feelings for her friend Brekken, who stands accused of murder and has disappeared back into his home world, and an instant attraction to a new girl who arrived just before everything started to go wrong. If Maddie can’t maintain the peace, the future of Havenfall – and her family’s place in upholding it – will be forever corrupted.

“The idea fills my head like an oil spill. It triggers the dread that always eats away at the corner of my mind, the fear that, with the wrong words or actions, I could lose Havenfall. I could misstep and turn the delegates against me, or let the secret slip and ruin everything.”

One of the most enjoyable aspects of Sara Holland’s books is how readable they are, and Havenfall is no different. It’s an intriguing fantasy story that caters to everything YA readers enjoy: young love, complicated family dynamics, impressionable characters thrust into positions of power before they’re ready. It never delves particularly deeply into these characters’ traumas and pasts – something that might put off readers who enjoy more emotionally complex YA novels – but that’s part of the reason this is such an easy, engaging read. It’s pure fantasy escapism, set within a magical, mystical Colorado manor that vividly jumps off the page with Holland’s enchanting descriptions.

Havenfall is a living, breathing entity, existing alongside the characters and providing a neutral, protective environment for them. But it’s a delicate treaty between worlds and right from the beginning there’s a heavy sense of foreboding as it becomes clear that Maddie’s beloved sanctuary is on the edge of falling apart. All it takes is one person with dark intentions and everyone’s safety is compromised. Unfortunately, that person in question is easy to identify early on, which does steal some of the mystery and tension from the rest of the story.

The first person narrative, whilst giving plenty of insight into Maddie’s thoughts, also feels somewhat restrictive. We hardly explore any other characters aside from Maddie and her potential new love interest, Taya, which is frustrating when there are so many other potentially fascinating characters’ lives to delve into – Brekkan for one, who features briefly at the beginning and then disappears into another world until the end. We’re given no reason to care about him as Maddie does and so his uncertain fate doesn’t have the gravity it should do. Havenfall really feels like the kind of book that would have benefitted from a wider third-person narrative, or even multiple perspectives.

What Havenfall does offer, however, is plenty of promise for the sequel. It’s full of atmospheric imagery and fleeting yet intriguing introductions, bringing with it plenty of backstory for Maddie’s life in both the ordinary world and within the boundaries of Havenfall. A few more surprises and a few less obvious plot twists would have made this a captivating fantasy book, but it’s still an enjoyable read, with a smart, kind-hearted protagonist who’s endearing in her vulnerability and naivety. Not a perfect YA novel then, but certainly one with the potential to become a much better series, whether it’s a duology like Everless or a trilogy.

Havenfall is published by Bloomsbury YA on 3 March 2020