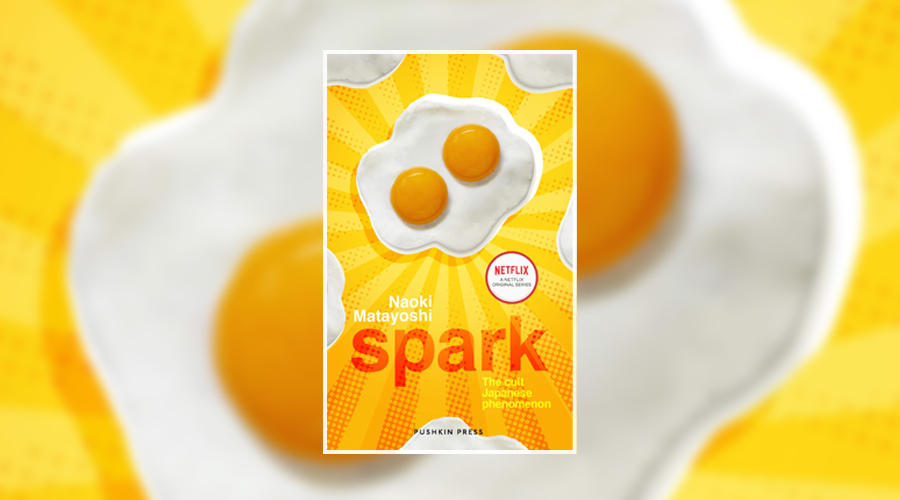 Tokunuga is one half of the comedy duo Sparks, who are talented, but still very much at the beginning of their career. After appearing on the same bill one night, the more experienced Kamiya – from the duo The Doofuses – decides to take Tokunuga under his wing. Both men get a lot from their friendship, although the problems they face along the way are considerable.

Naoki Matayoshi’s Spark has been a phenomenon in Japan. It sold over three million copies, won the Atagawa prize (Japan’s most prestigious literary award), and spawned a popular Netflix series. Now, five years after its original release, Spark finally receives an English translation.

Talking of translation… some of Spark is irrevocably lost in it. And it’s not exactly translator Alison Watts’s fault. There are many Japanese concepts at play here that don’t have an English equivalent, and as such, unless you are particularly au fait with Japanese culture, much of the first portion of the book leaves you running to catch up. This is especially notable when it comes to the comedy. We witness a load of Sparks routines, and none of them are the slightest bit funny; more often, they are plain irritating. The whole Manzai (conversational) style of comedy just doesn’t translate at all.

Happily, despite those frustrations, Matayoshi’s writing is so relatable and interesting that problems with the comedy don’t end up mattering all that much. The specifics of Tokunuga’s career are ultimately unimportant; anyone who’s ever harboured dreams of success in any creative pursuit will understand where he and Kamiya are coming from. Whilst the comedy is subjective, Tokunuga and Kamiya’s conversations about creativity and originality and ambition are universal. This is one of those books that are so full of fascinating, recognisable truths, it makes you want to highlight every other line.

Although at fewer than 200 pages, Spark is a slim novel, it packs a lot in to the development of the relationship between the two comedians. When Tokunuga first meets Kamiya, he is in awe of him. His knowledge, his skill; he can do no wrong. But the more time they spend together, the more Tokunuga realises how vulnerable, unhappy and insecure his mentor is. His confidence – so dazzling at first glance – is an act. It’s all a show. And the mentor needs the student as much as the student needs the mentor; Tokunuga gives Kamiya a sense of fulfilment he’s been sorely lacking. The interplay between the two characters, the way the balance of power shifts, is handled with such sensitivity by Matayoshi.  A comedian himself, he knows the struggles the two men have faced. He’s been there. That experience, the empathy, really comes through.

Spark closes with one of the most surprising, totally unpredictable endings I have ever read – and if you somehow do manage to guess what’s going to happen, I’m a little bit worried about you! Though the absurd event initially seems to come out of nowhere, upon reflection there is something so awkward, ambitious, and human about it, it fits right in with the rest of this astute, compassionate novel.

It’s easy to see what all the fuss was about.

Spark is published by Pushkin Press on 5 March 2020