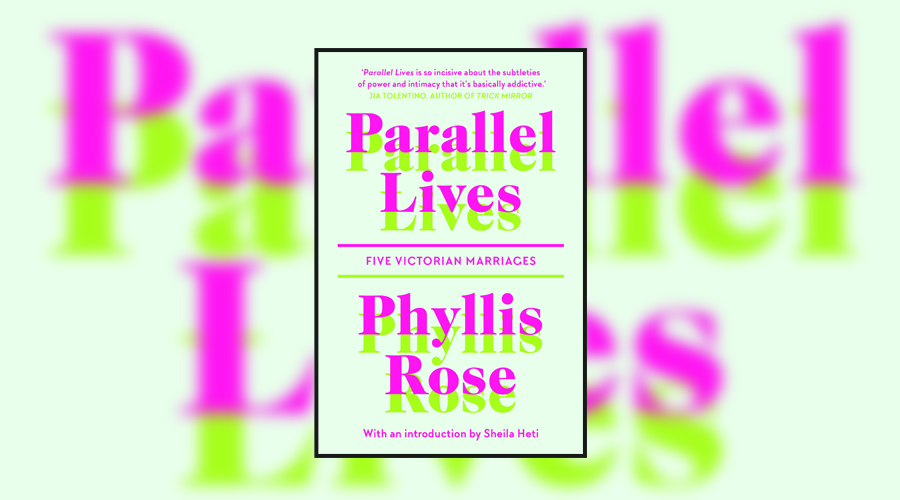 It’s been nearly 40 years since Phyllis Rose’s nuanced and fascinating examination of five Victorian marriages was first published in 1983, but if this 2020 re-release proves anything it’s that Parallel Lives is as relevant today as it’s ever been. As much a critical exploration of power and intimacy in partnerships as it is a group biography of some of the 19th century’s most esteemed writers and thinkers, Parallel Lives is a compelling and insightful study of a woman’s role in society and marriage in Victorian England, and an essential piece of feminist non-fiction that continues to resonate with women today too.

Like the subtitle of this novel explains, Parallel Lives is an intimate look at five different Victorian marriages, each of which are considered in detail and with compassion as Rose charts these relationships at different stages of their marriage, focusing in on a particular period or problem with each couple and each chapter. Rose explores relationships both conventional and not: from Effie Gray and her non-consummated marriage to John Ruskin (and later relationship with John Everett Millais too) to Charles Dickens and his disastrous marriage to Catherine Hogarth and George Eliot’s unwed union with George Henry Lewes – the most scandalous, but probably also the most successful of all the relationships explored in this book.

Rose also explores the relationship between John Stuart Mill and Harriet Taylor, and each of these four couples’ lives and unions are framed by that of Thomas Carlyle and Jane Welsh too, exploring their initial courtship and, ultimately, Jane’s act of posthumous revenge as she used her journals to reframe her whole relationship. Through each of these stories of parallel lives, Rose examines how desire and fantasy, power and control, continues to play out in our relationships.

“Marriages go bad not when love fades – love can modulate into affection without driving two people apart – but when this understanding about the balance of power breaks down.”

The basic position of this book is that every relationship has two narratives that run alongside each other, but do not necessarily constitute the same experience. It’s the same relationship, hitting the same milestones and problems, but each party is experiencing it differently depending on different factors – gender, for example, when it comes to the Victorian marriages explored here, but also race, class and religion – and the power dynamics in the relationship are constantly shifting as a result. It’s the kind of critical basis that prompts questions and reflections instantly at the best of times, but Rose goes on to discuss the nature of equality and the role of power within marriage too, not to mention encouraging reflections on sexual and social politics, our expectations of marriage and what it means to really co-exist with someone, including the sacrifices we’re willing to make.

Considering this, it should come as no surprise that Parallel Lives is a book that’s rife for discussion and, with her clear and thoughtful analysis of these partnerships, Rose has certainly laid the groundwork for any reader who wants to dive in to any one of these lives, relationships and theories and dig deeper. In her new introduction to the book too, Sheila Heti provides a much-needed reflection on this work for 21st century readers, noting the impact that Parallel Lives has already had on generations of readers and considering the role of marriage in a society that’s less bound to the Victorian notion of ‘till death do us part’.

As ever with works of non-fiction, your enjoyment of this book will come down to whether or not you’re interested, however vaguely, in the subject matter at hand, as well as how committed you are to seeing the book through. For me, as I’m most likely to choose fiction as my reading material of choice, Parallel Lives was a struggle to get into, and it wasn’t until midway through the chapter on Effie Gray and John Ruskin that I began to get into the groove of the book and wanted to read on for enjoyment, rather than necessity.

But while I picked up this book for the promise of an intimate look at the domestic lives of a few eminent Victorian writers – Charles Dickens and George Eliot in particular – I was soon compelled onwards by the interesting ideas raised and the concise, easily-readable ways in which they were introduced. Inevitably, there is a lot to unpack in Parallel Lives, but Rose remains a confident and knowledgeable voice throughout, and I’m already looking forward to revisiting this book in years to come.