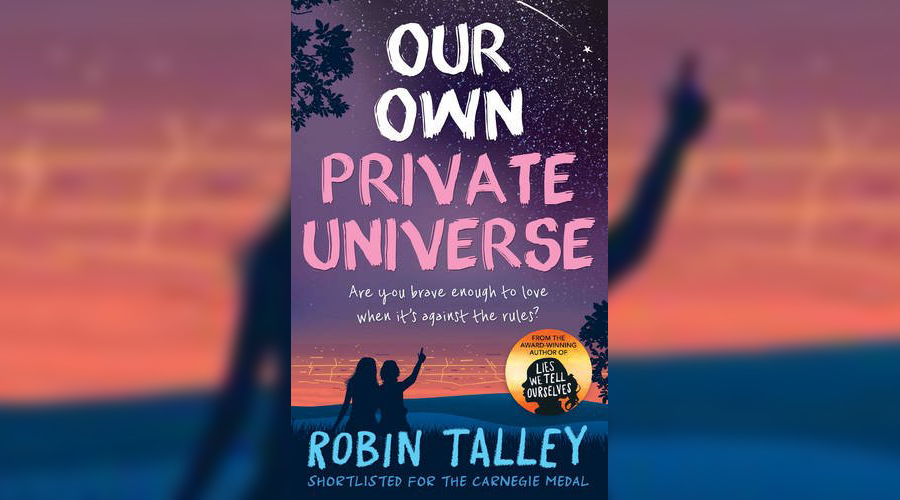 Even without getting to the note in Robin Talley’s acknowledgements, you can tell just by reading it that Our Own Private Universe was a true labour of love and in many ways it’s a story that needs to be out there in the world. From the get go, there’s a lot going on in this novel – maybe even too much. If even some of the issues touched upon here had been explored in more depth throughout, Our Own Private Universe could have been something special indeed. But the fact that the focus of this YA is 15-year-old Aki exploring her sexual identity in her first gay relationship is still a step forward worth celebrating – and the fact the story is told in the refreshingly honest voice that Talley has given Aki makes it one worth reading all the more.

At the beginning of this novel, Aki is pretty sure she’s bisexual, even if she’s never had the chance to see how much she actually likes girls before, and she sets off on her summer trip to a small Mexican town with her church youth group determined to test the theory that dating girls appeals to her as much as, if not more than, dating guys does.

It’s not long before she meets Christa, the slightly older, seemingly more experienced, sophisticated cool girl who is equally as interested in Aki, and as their time in Mexico plays out, Aki finds herself asking more and more questions about her sexual identity: how do two girls have sex? Does liking one girl a lot mean you like all boys less? And when does a fling become something altogether more important?

There’s no denying that witnessing Aki and Christa’s story and relationship unfold is important, if only because the LGBTQ community is still very much underrepresented in the YA literary world, but their largely positive experience felt to me very much like a best case scenario situation. Even with all of the ongoing petty drama between friends and peers and Christa’s reluctance to go public with their relationship to keep her bi- or pansexuality a secret from her very conservative parents, Aki is given a very open, safe and positive space to figure out who she is and who she likes.

“We didn’t need to hurry. We had all the time there was. Maybe – just maybe – this wasn’t only an experiment. Maybe this was something else altogether. Maybe it was even something real.”

Of course, this isn’t necessarily a bad thing – more than anything, Our Own Private Universe is a positive and frank portrayal of a questioning teen asking herself questions she doesn’t necessarily feel comfortable discussing yet, so from a reader’s point of view there’s more than enough to consider in that alone without bringing in the questions of parents’ lack of acceptance and peers’ lack of understanding.

Yet for a contemporary YA novel, at times this all played out just a little too perfectly for me and on quite a small scale; this is Aki’s story and Aki’s journey within her immediate social circles, but how it plays out on a wider context is largely left unexplored. Which is the other main thing that feels a little disjointed about this novel: Aki is both a black character and from a religious family, but both of these aspects of her life feel more circumstantial than relevant to her story. There are wider contextual influences at play in any young person’s life, but this novel channels all of its focus into sexual identity and sexual identity alone.

Even so, Our Own Private Universe probably does a better job at capturing a teenage experience than most, and everything from the social activism informing opinions in the latter half of the novel to Aki’s close family relationship with her brother Drew in particular made for some beautifully heartwarming and realistic moments I would have liked to see more of. Yes, it’s unnecessarily dramatic at times and yes, a lot of the characters get caught (or reveal themselves to be) in a lie at some point or another but in general there is a lot to like about this novel.

As a contemporary YA summer romance novel, it’s warm, easy and honest – and Talley’s descriptions of Mexico are wondrously vivid – and as a novel with an LGBTQ focus, it’s both poignant and insightful. Combine the two and Our Own Private Universe is an important story and one that will undoubtedly strike a chord with anyone going through something familiar.

Book Review: As I Descended by Robin Talley