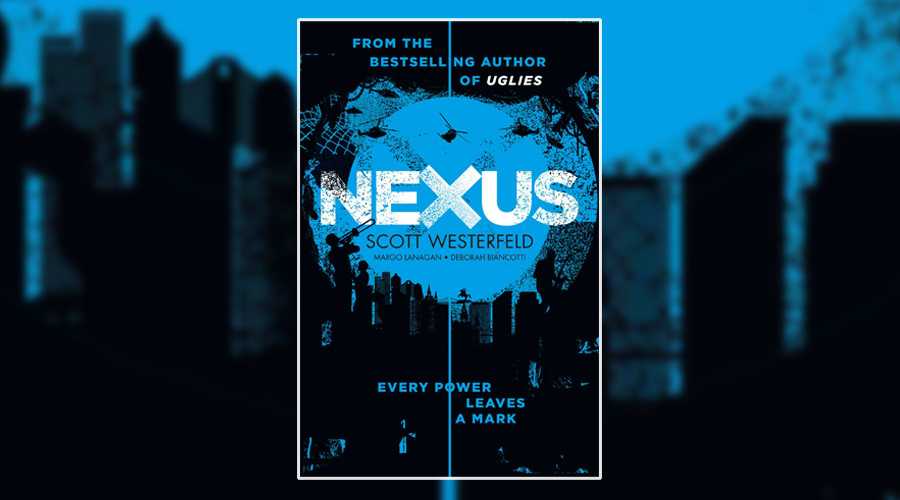 Even if you’re going into Nexus, the third and final book of the Zeroes trilogy, without any knowledge of the two books that came before it, opening a novel with an out-of-depth teenager in prison on terrorism charges is a sure-fire way to hook an audience.

Nexus begins with mystery, suspense and a little danger, and it doesn’t let up on any of those things as it unfolds and our rag-tag group of zeroes find themselves on the edge of a new world order with more power than they know how to handle. After staging a breakout of their Glorious Leader (aka Nataniel aka Bellwether) from a maximum security prison in the early chapters of the novel, Crash, Mob, Anon, Scam and Flicker – that’s Chizara, Kelsie, Thibault, Ethan and Riley – regroup and head to New Orleans for Mardi Gras, where the joyous, celebrating crowds promise power to anyone who knows how to channel it.

Because something’s going down in New Orleans. There’s an army of teens with powers like the Zeroes’ – teens with a better grasp and knowledge of what their powers mean and how to use them to the best of their abilities – and it’s an army being led by a girl whose plans for the world could be nothing short of cataclysmic.

“It was a small thing, at first, that loss of one Charismatic, with so much going on. Priceless gems underfoot. The dueling angels at opposite ends of the street. The waves of clarity and charisma and glitchiness and honesty that billowed out from the float in turn. And underneath it, the hunger that threatened to break out and consume them all.”

With over a year’s wait between the releases of books two and three, jumping back into the world of the Zeroes proves to be more than a little bit of a challenge. The core group of characters remain strong, with their powers and relationships coming back to readers just a beat or two behind their re-introduction, but the callbacks to the events of the first two novels are either too sparse or too fleeting for readers to grasp onto immediately, making the first half of the novel more confusing than gripping.

Thankfully, Nexus shakes that off the second the group enters New Orleans, with the vibrant new setting, its celebratory atmosphere and its devastating history quickly proving a rich backdrop for the chaos of the final showdown to unfold, and from that point on Nexus turns into a very fitting finale.

As a final book in a trilogy, authors Scott Westerfeld, Margo Lanagan and Deborah Biancotti waste no time in bringing things to a head, introducing new characters with new powers and new stakes on almost every page. But, if nothing else, this trilogy has been a reliable source of non-stop action from the get-go – and Nexus is the best novel of the three when it comes to that, bringing a whole new meaning to the well-worn phrase ‘with great power comes great responsibility’.

The result is a jam-packed 400-odd pages that continuously drives the plot forward and leaves little time left to reflect on anything, even when the story sees the teens’ struggles with the sheer enormity of their powers; if previous book Swarm saw the series take a deadly turn, then Nexus is a reflection on what can happen when teens realise just how powerful they themselves can be.

As the epigraph says, “Every power tells a story.” And the Zeroes’ story gets a very strong and a very satisfying conclusion indeed in Nexus.

Nexus was published by Simon & Schuster on 22 February 2018