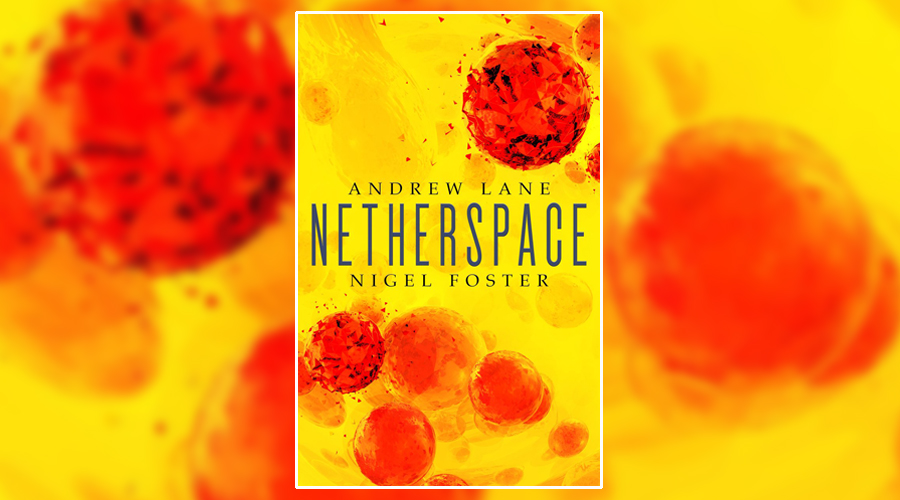 The words weird and wonderful can probably be used to describe most sci-fi space operas, but Andy Lane and Nigel Foster have created something in Netherspace that rips up the sci-fi rulebook, meaning those words just can’t cut it anymore. Building on a bold and creative vision, this novel creates a complicated network of human and alien communications and puts science, technology and human creativity at the heart of the futuristic landscape it depicts. Netherspace isn’t just weird and wonderful, it’s also complex, confusing, intense, imaginative and, above all, a book unlike any other you’re likely to read this summer.

Set 40 years after an alien race known as the Gliese first made contact with humans, Earth has now become a highly-developed planet through the medium of trade and the swapping of random human artefacts for advanced alien technology. The trades often don’t make sense and are always random. In fact, there’s only one consistent trade, and that’s the exchange of humans for the Gliese Netherspace drive – a piece of tech that enables humanity to explore the galaxy and colonise the stars with more ease than ever before. Aliens can’t be communicated with, so when a group of human colonists are kidnapped by extraterrestrials and taken to an uncharted planet, the Earth organisation that oversees all alien trades, GalDiv, puts together a unique team to find the missing colonists and negotiate their safe return.

It is in this world that we’re introduced to Kara, an ex-army sniper and part-time assassin who’s reluctantly drafted in by GalDiv to lead the mission, as well as Marc, an artist with no combat experience who became famous after the aliens took an unexplained interest in his work. Their mission is dangerous and likely to be unsuccessful but, along with pre-cog Tse, a human with psychic abilities who can see the likely way events will play out, they’re the ones who GalDiv need to give it the best possible shot, so they’re the ones who’ll be Going Up, Going Sideways and trying to do the impossible: communicate between alien species.

“There are no patterns of any kind in netherspace. No logic. No mathematics. No cause, no effect and nothing set in stone. Only possibility fields flicking in and out of existence and never the same one twice. In colour, too. It’s enough to drive a man mad.”

By its very nature, Netherspace is a book that needs a lot of world-building and, for the most part, it does so craftily and to great effect. The world is immersive and inventive, with each new jarring element being introduced feeling like a natural addition a few pages later. It also serves as something as a mystery in itself, working alongside the main plot of the novel; there’s so much about space and the galaxy that the characters don’t know, so when anything happens it’s as much an intrigue (or horror) to readers as it is to them. This does make the novel a difficult read at times; if the characters can’t explain what’s happening, then readers don’t get an explanation, and so a lot of this novel boils down to accepting the science or not, which will either win readers over or completely alienate them.

As far as the characters go too, Kara and Marc stand out purely because they are effectively the same person, thanks to a simulity that allowed them to share each other’s thoughts, backgrounds and experience, but the fact that both of them flip constantly between hard-lined military action and more empathetic, creative thinkers makes their arcs frustrating to follow at times. Tatia too, the self-proclaimed leader of the kidnapped colonists, leaves an impression purely because she has the most active role in the Pilgrim scenes, whereas the majority of the other characters in the book are so indistinct they basically just blur into a general role of staff, alien or hostage with not a lot else to define them.

Netherspace is understandably very sci-fi heavy – to the point where it’s probably too much so for a casual reader, or someone who’s not already invested in this particular genre – but there’s no denying the thought and creativity that’s gone into it too. Here, aliens aren’t recognisably human with an alien-like head like all sci-fi TV shows before it. Rather, they’re described as limbed piles of wet leather, or maggot-mounted greyhounds, offering no frame of reference for anything readers are accustomed to and going a long way towards enhancing the novel’s world.

At its heart though, this novel is an action-led search-and-rescue adventure, and a story of survival when it comes to the Pilgrims too, and the alien world its set in is just the bold and unusual package it’s wrapped in. The story is compelling, even if the characters are largely forgettable, but, mostly, it’s a unique exploration of a idea we’ve seen brought to life across film, books and TV show shows many times before.

Netherspace was published by Titan Books on 2 May 2017