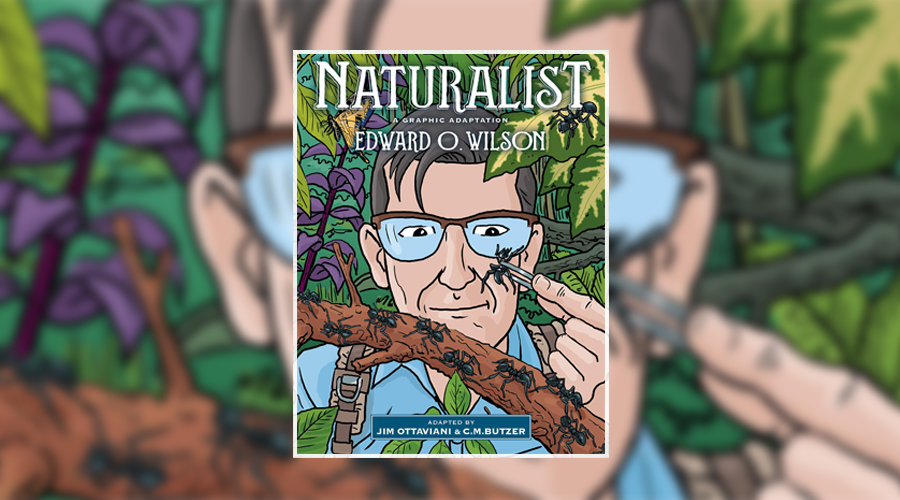 “Most children have a bug period; I never grew out of mine.”

Heralded as “the father of biodiversity” and “the father of sociobiology” (quite the progeny), Edward O. Wilson is arguably the most famous (and, occasionally, infamous) American biologist, naturalist, and writer of the twentieth and twenty-first centuries. The world’s foremost expert on ants and a leading conservationist, Wilson has conducted pioneering research into microevolution, communication via pheromones, and island biogeography. He is also a two-time Pulitzer Prize winner (for On Human Nature [1979] and The Ants [1991]) as well as a New York Times bestselling author (for Letters to a Young Scientist [2014], among other works). In 1994, Island Press published Wilson’s autobiography, Naturalist, which the Los Angeles Times described as “one of the finest scientific memoirs ever written, by one of the finest scientists writing today.” Now, in an effort to inspire a new generation of environmentalists, Wilson and Island Press have teamed with Jim Ottaviani and C.M. Butzer to publish Naturalist: A Graphic Adaptation.

Ottaviani has carved out an impressive niche as a writer of graphic novels about scientists and the history of science (including T-Minus: The Race to the Moon [2009], Feynman [2011], and Hawking [2019]), and his adaptation more than does justice to Wilson’s original book. Fittingly for an adaptation of an autobiography, he has Wilson narrate his own story, with the contemporary Wilson (drawn by Butzer as a rather spritely ninety-one year old) appearing in panels alongside himself as a child in order to introduce the book and explain the evolution (ahem, excuse the pun) of his passion for science, nature, and discovery. This narrative device works well, as it reflects Wilson’s friendly and familiar writing style and also allows his humour and self-deprecating asides to draw the reader into the story of his life.

And what a life it’s been. Wilson’s stellar scientific career did not begin with a prestigious education. Rather, it started with a somewhat nomadic childhood, a disrupted education, and the fact that the “outdoors was the one part of my world I perceived to hold rock steady. Animals and plants I could count on—human relationships were more difficult.” After his parents divorced, and following a one-year stint at military school, Wilson was sent to live with a succession of relatives and family friends. Even after he went to live with his father and new stepmother, the family moved around a lot due to his father’s employment troubles. The one constant throughout those early years was his love for the natural world. Wilson became a prolific collector of butterflies, bugs, lizards and other creatures, sometimes to the significant chagrin of those around him. One particularly funny incident sees him proudly show his stepmother a snake he caught, only for her to request that he walk 40 minutes in a direction of his choosing and then release the snake. Butzer does great work on the characters’ expressions during this and other amusing exchanges.

Although it seemed clear from an early age that Wilson would go on to forge a career in the field of natural history, the actual direction he followed was heavily influenced by happenstance. He was initially a keen ornithologist, but a childhood fishing accident that left him blind in one eye as well as the early degeneration of his hearing put paid to his birdwatching ambitions. Similarly, he considered becoming an expert on flies, but the shortage of insect pins as a result of World War Two prompted him to shelve that ambition too. In the end, in a highly relatable beginning to an extraordinary career, he opted to focus on ants because (i) he could see them and (ii) he could capture them in jars. Ottaviani and Butzer, guided by Wilson’s engaging narration, take readers through these formative episodes of Wilson’s life in the first part of Naturalist: A Graphic Adaptation, which also covers his early university career and initial fieldwork (the “naturalist hobo” era).

In the second part, Ottaviani and Butzer move on to the substance of Wilson’s career, the breakthroughs, the discoveries, the disappointments, and the world travels. Wilson was working as a professor at Harvard during this phenomenally productive period, although his research took him to Cuba, Mexico, Australia, New Guinea, Sri Lanka and beyond. Unsurprisingly, the text can be a bit sciencey in places, but Ottaviani generally manages to break up the detail and spread the technical information across panels into which Butzer has worked picturesque scenery, surprising action, and the occasional sight gag. Wilson’s personal life is also regularly brought to the forefront, which helps to foster pathos and sympathy in readers when setbacks and controversies occur. Of course, the most significant such controversy concerned the publication of Sociobiology, in which Wilson applied his theories regarding the behaviour of insects to vertebrates and, much more briefly, humans.

Wilson’s ideas about the evolutionary mechanisms behind human behaviours such as violence and altruism proved hugely polarising, with some believing that he was advocating eugenics. Ottaviani and Butzer don’t shy away from the controversy, instead depicting the allegations and actions against Wilson (that his theories promoted racism and misogyny and excused serious social inequalities) and allowing him to explain, straightforwardly and in his own words, the purpose and actual findings of his research. It quickly becomes clear that Wilson had no nefarious purpose. In fact, he believes that only a small fraction of human behaviour is the result of genetics, with the rest being due to environmental influences. Still, it is equally clear that he regrets including the chapter on humans in Sociobiology and, if given the chance, would publish his research in a different way.

The third and final part of Naturalist: A Graphic Adaptation is much more introspective than the other two, as Ottaviani focuses on Wilson’s musings about the future, particularly the threat of environmental collapse and mass extinctions, as well as his hope that he has sufficient years left to see and help achieve a change in terms of how humans treat the planet and its other inhabitants, both flora and fauna. It makes for a fitting ending to a deeply thoughtful yet still hugely engaging book. Through Ottaviani’s interpretation of Wilson’s words, as well as Butzer’s skilful capturing of thoughts and events in his colourful and accessible art, Naturalist: A Graphic Adaptation manages to both inform and entertain. It tells the story of Edward O. Wilson’s remarkable life and career in a way that impresses and inspires, and reading it with hopefully prompt others to follow the same path as Wilson and do what they can to increase knowledge and understanding of the natural world.

Naturalist: A Graphic Novel was published by Island Press on 10 November 2020