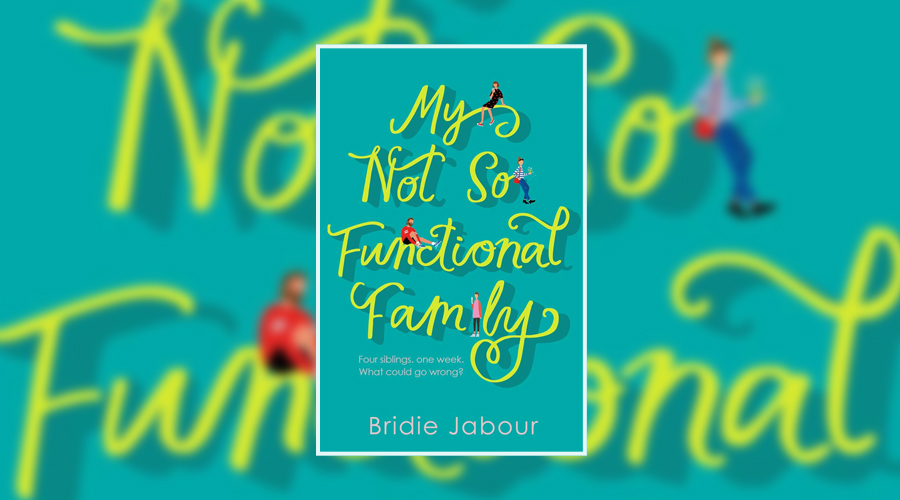 Just like any large family, Bridie Jabour’s first novel My Not So Functional Family – or The Way Things Should Be, as it was first published as in Australia – is a chaotic whirlwind, and a novel that throws its readers headfirst into the well-established family dynamics of four grown-up siblings and the complicated ties they have to one another.

Claudia Carter is getting married in a week, which calls the four Carter siblings back to their childhood home and into the maelstrom of allegiances, disagreements and squabbles that most families know well. But while Claudia’s wedding proves the catalyst, the week the family – including overbearing mother Rachel, wicked aunt Mary and Claudia’s struggling best friend Nora – spend together soon proves to be a perfect storm of conflict as old resentments bubble over and the delicate peace so long navigated by the Carter family comes close to shattering altogether.

“When you grow up with people, as opposed to just live with them, when you love them enough to show how enraged you are at their bathroom transgressions, then an unavoidable consequence is knowing them. Really knowing them.”

While Claudia and her plight are placed front and centre at the novel’s synopsis, this isn’t really her story. Instead, this is a story about a family, through and through. From matriarch Rachel, who’s as quick to defend her children as she is to point out their faults, through to lost and angry youngest child Poppy and distant divorced dad George, each of the Carters have their own life to figure out, with all the bad decisions, shameless coveting and self-criticism that entails. As an exploration of a modern family and millennial tensions, My Not So Functional Family thrives, offering an astute reflection on how the life you’ve made for yourself affects your relationship with your family. But as a romantic, comedy novel, it does come up short.

For a novel that’s sold on Claudia’s relationship doubts and promises of pre-wedding Tinder hijinks, Claudia’s romantic life actually plays a very small part in the overall plot. Instead, we’re also treated to eldest sibling Zoe and the mystery of how she affords her perfect life, and to kind-hearted Phinn, whose primary purpose seems to be as the only man in a houseful of women and to provide a commentary on the siblings’ small-town upbringing. As the youngest, Poppy is often dismissed as angry, sullen and selfish, but readers also see the all-too-relatable reality she’s facing as a young adult juggling numerous jobs to make not-enough money and endlessly worrying about her future, while Claudia’s best friend Nora is fighting her own heartbreak, determined not to talk to her best friend about it in a bid to not make the wedding about her own problems.

Unsurprisingly, My Not So Functional Family struggles to decide just what, exactly, it wants to be about – and combined with the sheer number of characters that are introduced in a short space of time, it starts off as a confusing read and it does take a long time for the pieces of the family puzzle to fall into place. With so many characters to touch base with, scenes relived through different perspectives and a bit of jumping between past and present, too, this is not so much a straightforward narrative as it is a loosely connected collection of vignettes centred on one family in the run-up to the kind of the big family event that is sure to always cause tension. But once the story settles, and you get a hang of the characters who are so often weaving in and out of the pages, Jabour’s novel does ultimately deliver on its promise of exploring a family of people at loose ends, and offers up a number of honest, funny and relatable moments that are sure to strike a chord with many readers.

Throughout the novel, My Not So Functional Family feels like it’s trying to walk a line it doesn’t often manage to stay straight on, veering wildly between comical and serious and jumping from character to character without fully knowing where it’s going to end up, resulting in a disjointed read with an abrupt ending. But when it balances everything just right, there’s a lot of promise in this novel – it’s just a shame that it never quite manages to live up to that.