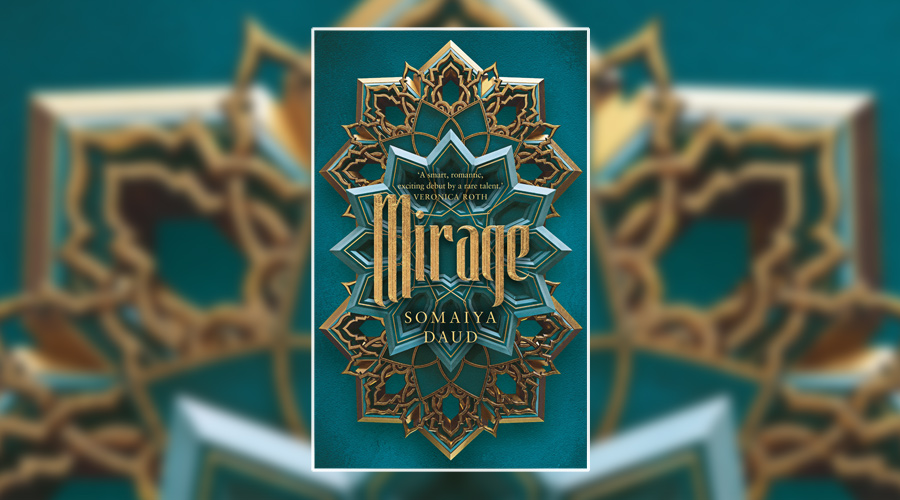 If there’s a quote from Somaiya Daud’s Mirage that perfectly describes the themes of her debut novel, it’s this: “The crown of Dihya had been stripped from me, my face changed, my body broken. But I was not a slave and I was not a spare. I was my mother’s daughter, and I would survive and endure.” This is a book about slavery and survival, of endurance and fortitude, of family, identity and belonging. It’s also a thrilling space opera, YA fantasy hybrid infused with Arabic influences – blending the futuristic with the traditional.

Daud wastes no time introducing her Morocco inspired world and the fierce and fascinating characters that populate it. Within a few chapters, our sixteen-year-old protagonist, Amani – a simple village girl on the small moon of Cadiz – is ambushed at the kasbah during her coming-of-age ceremony and kidnapped by the government. Treated like a prisoner and guarded by droids, Amani is taken to her mother planet, Andala. The star system is dominated by the brutal Vathek Empire, and Amani soon realises why she, specifically, was taken, when all the other girls her age were left alone.

Amani is the veritable doppelgänger of the cruel half-Vathek Princess Maram – a royal who’s equally hateful and hated. The princess requires a body double for public occasions where an assassination attempt is likely, and Amani is forced to become a walking, talking replica of the very person who stole her away from her home. One wrong move could not only expose the entire charade but lead to Amani’s death too.

Andala is a world away from Amani’s humble farm life and, despite constant fear and panic, she reluctantly finds herself enjoying the beauty of the palace – the striking clothes and lavish jewels, the plentiful food and opportunity to travel the star system. What she particularly enjoys, though, is spending time with the princess’ handsome fiancé, Idris – the last surviving heir to the tribe who tried, and failed, to oppose the Vathek invasion. The more she pretends to be the princess, the more Amani becomes acquainted with her role, falling for the man bestowed to her double.

“The farmer’s daughter from the backwater moon and the body double couldn’t have been more different.”

This isn’t the first fantasy foray into doppelgängers or common people switching places with royals, but Daud instils her story with a unique interplanetary history and Moroccan essence that sets her world-building apart from other stories of this ilk. Whether it’s the archetypical architecture, the traditional rituals, the clothing or the character names (Idris was the ‘founder of Morocco’ after all), Mirage is firmly steeped in a rich, vibrant and ancient culture. The sci-fi element – with its droids, advanced technology and space travel – melds well with the old-world parts, creating a multi-layered and intricate story that, once you start reading, you won’t want to stop.

Amani and Idris are the central duo and, whilst their romance plays out fairly predictably (it’s the very definition of instalove), it’s also one that’s easy to invest in because they’ve both lost so much. They understand the other’s loss and they become a solid, dependable team. However, the absence of ambiguity to Idris’ motivations and loyalties does steal some of the allure from the character. Stories like this need to throw surprises at readers, and that’s really the only thing missing from Mirage: that lack of shock factor. Idris does what you expect him to do, as does Amani, as does almost every character except Maram – who’s so complex because perhaps she’s not the big, bad villain everyone thinks she is. She’s still done terrible things, but by the end of the book, there’s a feeling that she’s more a product of her ruthless upbringing than pure cut-and-dried evil. Hopefully Daud will explore Maram further in Mirage #2, because she’s fascinating in her volatility.

Beautifully detailed, with enchanting poetry and characters you’ll come to care for, Mirage is an exciting introduction to what is sure to be a thrilling series. It’ll be a long wait for the sequel indeed.

Mirage is published by Hodder & Stoughton on 28 August 2018