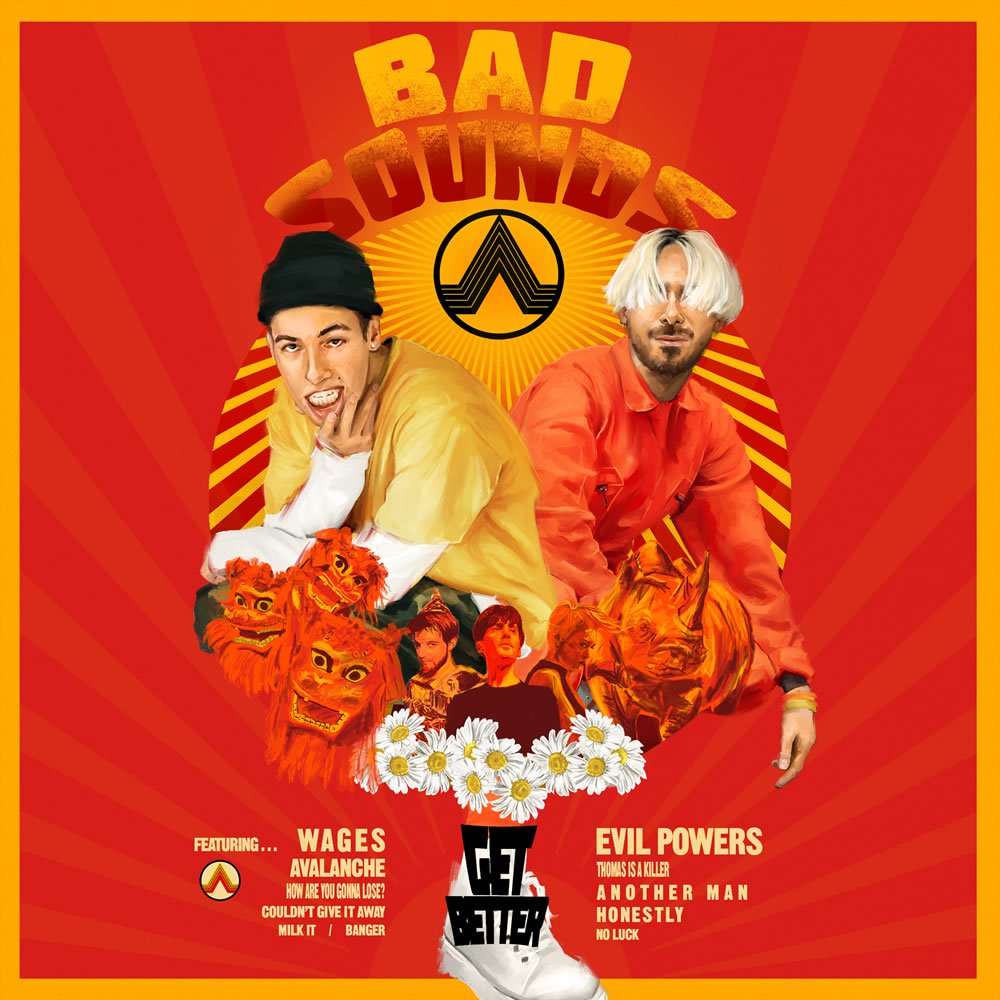 Ewan and Callum Merrett, the cheeky chappies behind R&B-indie darlings Bad Sounds, have officially Made It. After years in the hand-to-mouth singles-and-EPs game, they’ve finally brought their full-length debut album to the world. It’s been a wild ride up to this point: during their transformation from music school project to major going concern, Bad Sounds have turned out some of the tastiest new jams around, an exuberant mix of hip-hop-inflected funk and chirpy riffs that’s won them repeat coverage on the Beeb and in the indie press, and a growing legion of Soundz fans.

With Get Better they’re broadening that appeal, making the jump from pop fun to a more sensitive art. The title is a nod to the theme of anxiety that pervades the album’s lyrics (more on that later), but it’s also an apt description of the band’s progress as songwriters. ‘Wages’ and ‘Avalanche’, the golden oldies that open side one, are delightful and bright, but a bit formulaic – there’s plenty of Oasis, Peace and Dandy Warhols peeking out between the cracks. It feels fun, but not very original.

Skip on to ‘Couldn’t Give It Away’, though, and suddenly the game’s changed – mournful phased strings swirl you down into the main groove, and Ewan croons his message of hurt over a perfectly balanced organ wave. When the chorus explodes out of the mix, its familiar pop/rock tropes are lifted by the artful production of strings and backing vocals, a powerful mix of shout-along lyrics and soaring orchestration. It’s grown-up and sonically muscular, with the conviction of seminal works like ‘What’s Going On’ and the chops to match.

Moving further into the track list, songs like ‘How Are You Gonna Lose’ and ‘Honestly’ are beautiful, sunny slices of R&B, but blessed again by the Merretts’ inventive touch. The former sports some seriously soulful falsetto vox, while the latter rides along on a classic Sounds tongue-in-cheek Sarf Landan rap (‘I swear on an inuit that I came round to it!’). The little details add up to an accomplished whole that rewards multiple listens.

What’s more, like most of the album, they may be happy-sounding tunes, but they come from a place of confusion and angst. ‘How’ opens with the desperate, quiet request ‘please explain why you find it so hard to enjoy the day’, and ‘Honestly’ gets its title from the yearning words ‘I can care enough, be there, honestly…’. Elsewhere, ‘Evil Powers’, which came with a bonkers, hammy horror video, deplores the quick-fix quackery that those with poor mental health often encounter. There’s a kind of determined optimism about the madcap laughs in these songs – a sense that the Merrett brothers are giggling for fear of what might otherwise fill the silence.

That tension is felt most keenly in the dichotomy between the optimism of the opening theme (‘we’d like to take this time to invite you to get better. Take a deep breath, stop what you’re doing and get better’) and ‘Avalanche’’s downbeat but oh-so-catchy refrain: ‘try as I might, I’m losing the fight to get better’. What seems at first glance to be a collection of fluffy pop bangers on closer inspection turns out to be a poignant reflection on the mental tangle of anxiety and depression.

The struggle to improve – mental patient, heal thyself – is neatly represented in the juxtaposition of glee and frustration on Get Better. Wrestling with your own brain can be crushing – the pressure to be happy is a heavy weight. But happiness doesn’t lose its potency even so. The Sounds acknowledge the darkness so many of their generation seem to have inherited, but make the conscious effort to face it with joyful abandon. You can be anxious and excited about life in the same head. You can worry about being ‘a killer’ while enjoying a buoyant beat.

An essential ‘debut’ from one of the decade’s best new acts. Jump on board and join the fun.