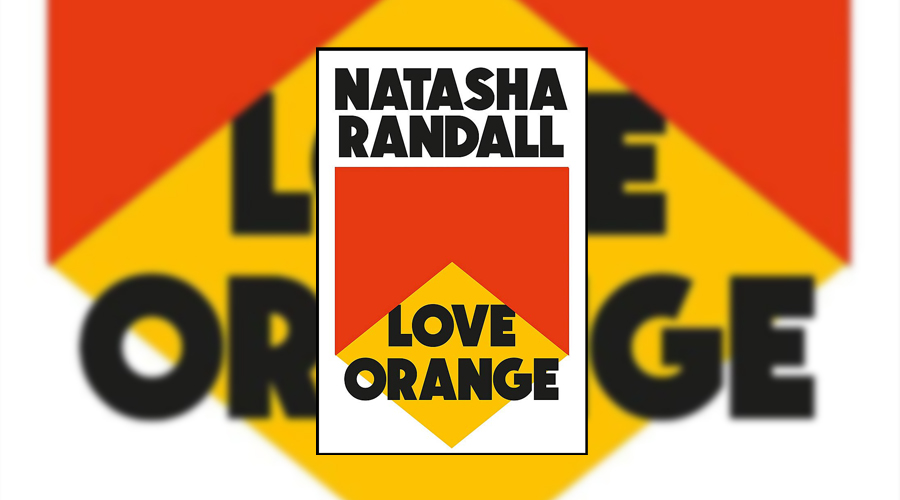 Jenny Tinkley has lived in Bentonville for one year. Her husband, Hank, has programmed their home to be a ‘smart house’ (it can make coffee, order groceries, and perform all kinds of tasks by voice command), and she feels like it – the house – is judging her. Jenny and Hank have two kids: the oldest son is distant and moody, the youngest may be autistic. Although she loves her family, Jenny isn’t happy.

To alleviate her loneliness, she has been taking part in her church’s pen pal programme, where she’s been writing letters to John, who’s in prison for manslaughter. The letters give her relief in two ways. Firstly, John makes an interesting, understanding correspondent. Secondly, licking the sweet orange sealant on the envelopes she receives give her a feeling of warmth and hope of the like she hasn’t felt in a long time. Soon, the orange glue has become an addiction.

Love Orange is the first novel from Natasha Randall, an acclaimed translator of Russian literature. In this debut, Randall has a lot on her mind. Technology is the headline concern; technology as an isolating, destabilising force. Whilst the Tinkley’s smart home never quite becomes as malignant as Hal 9000 in 2001: A Space Odyssey, or the iconic Simpsons episode where Pierce Brosnan voices a house that attempts to kill the titular family, it nevertheless plays a big part in Jenny’s misery. She needs a friend; what she gets is an automated servant that’s designed to fill her every want, but is incapable of being what she needs most: a person to talk to. And she fears it’s going to displace her.

When you throw in the oldest son’s damaging online habits, and the farce that is the ‘God Phone’– confessions at the Tinkley’s church aren’t conducted in person, but via text – the anti-technology bias is so strong here, so unsubtle, that it’s strangely old-fashioned. Then, consider that Randall also endeavours to tackle opioid abuse, the damaging effects of marriage on women, toxic masculinity, raising a non-neurotypical child, and the manifold injustices in the American legal system. It’s too much. Love Orange becomes weighted down by the loftiness of its themes. Randall tries to cover such a wide array of important topics, she doesn’t end up saying anything new.

On another level though, the level of prose and personality, Love Orange works far better. Randall’s writing is welcoming, readable and often humorous. We spend time with each of the Tinkleys over the course of the novel, and it’s enjoyable getting to know them. Jenny is the focus, but we also meet Hank – her conspiracy-minded husband who is really too thrilled to have had a DNA test ‘reveal’ that he is sixty-eight percent Viking. It is, however, Hank and Jenny’s youngest son, Luke – an endlessly curious and prodigiously wise eight-year-old – that’s the most interesting character here. Randall’s book may have too much of many things, but it doesn’t have enough of him.

Love Orange is entertaining, funny and ambitious in scope. Unfortunately, the overabundance of themes and lack of substance undergirding them prevent the novel from reaching its lofty goals.

Love Orange is published by riverrun on 3 September 2020