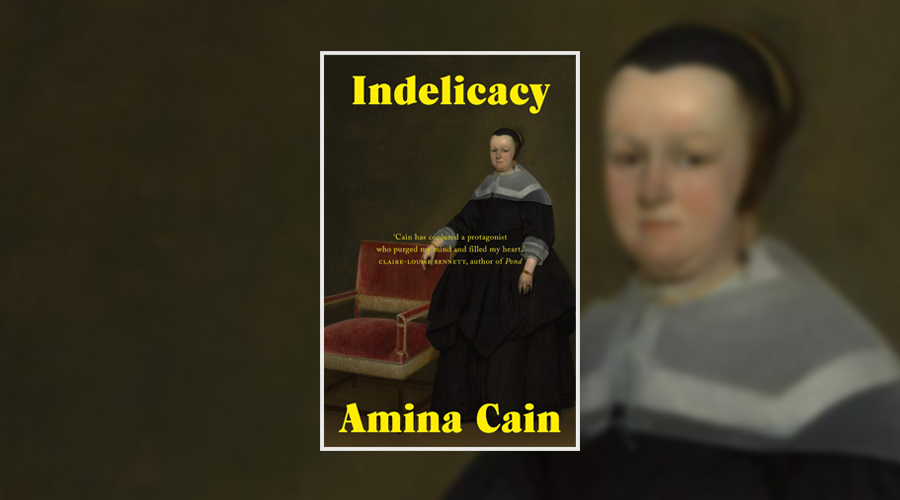 We don’t know where Indelicacy is set. Or when.

Vitória works in an art museum and writes during her time off. She is poor, but happy. Then she gets married to a wealthy man. Suddenly she has every material thing she could ever wish for, but doesn’t want any of it. All she wants is to be left alone. Solitariness, after all, is underrated.

Indelicacy is the first novel from Amina Cain. It’s fewer than two hundred pages, and the chapters are short too. Cain has discarded every single extraneous detail. Not a word here is wasted.

You might imagine that kind of ruthless efficiency to have created a harsh, ascetic book, but Indelicacy doesn’t feel that way at all. It feels sumptuous. Decadent. It’s about many things, but perhaps foremost amongst them is pleasure – primarily the pleasure of being alone. Cain dedicates multiple passages to Vitória luxuriating in her isolation; being free to work on her writing without having anyone around making demands on her time and attention. All too often women on their own are seen as pitiable creatures. To read about that aloneness as a positive – something to be sought out, no less! – makes a thrilling change. It’s just one of the many aspects of Cain’s novel that make it so intriguing.

Another is her defiant refusal to situate it in any recognisable location or era. From the few details we are given, Indelicacy could be set in the present day or the 1800’s. It could be set in America, or France, or Brazil. In part, this unusual decision is an extension of Cain’s efficiency. The book doesn’t need any time or place markers to do what she wants it to do – so why put them in? Additionally, it underlines the universality of the novel’s themes. Excising these markers makes it read like a fable. You don’t need to know that the tortoise was called Henry, or what the hare had for breakfast that morning. Extra information, inexpertly used, can take away more than it adds. Cain knows this, and has acted accordingly.

Over the brief run of Indelicacy, Vitória goes from being so poor that she has to skip meals in order to buy her friend a Christmas present, to having enough money to satisfy her every material desire. It may appear like a fairy tale, but it’s a transition that causes her a great deal of unease. While Cain’s debut is deliberately ageless, Vitória contending with this new privilege, and deciding if material comfort is worth the moral discomfort it gives her, seems very modern indeed.

It’s remarkable to witness how, after cutting away each unnecessary word, there is room – even in a novel of this size – to cover such an array of fascinating subjects, whilst adding something bracingly new to the discourse. Indelicacy has the makings of a modern classic, and is destined to be a book that women, in particular, hold close to their hearts.

Indelicacy is published by Daunt Books on 3 September 2020