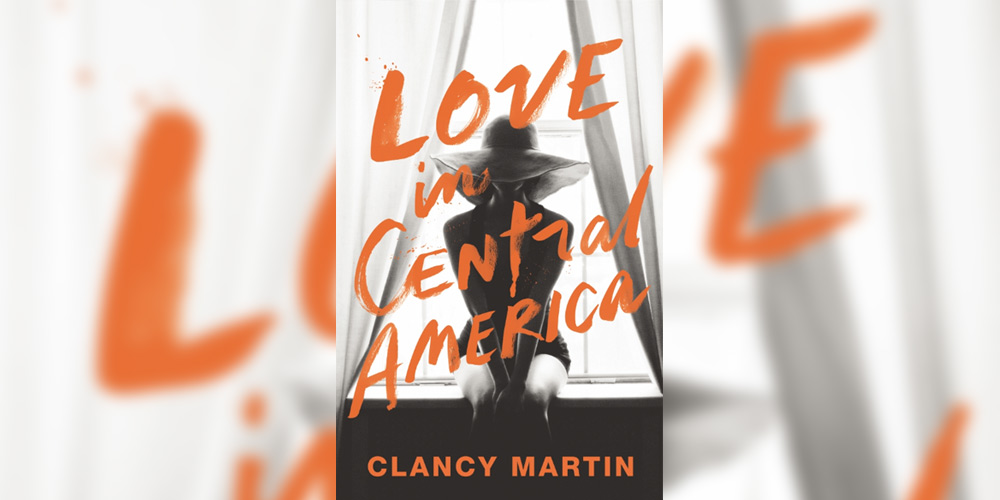 If you couldn’t guess from the title, Canadian writer Clancy Martin’s latest novel is set in Central America and pivotal to the story is an all-consuming love, though it’s far from the romantic kind. Dark, damaging and intense, it’s a love that’s doomed before it even begins, and that’s what makes this book so irresistible: you just know it’s going to end badly.

Admired novelist Brett is visiting one of the luxury hotels in her husband’s real-estate portfolio when she meets his friend, Eduard. Brett compares the charming banker to Benicio Del Toro and there’s an instant spark between the two. Within hours of meeting, they’re hopping into bed together, marking the beginning of a torrid affair built on primal lust and desire.

Both Brett and Eduard are in seemingly happy relationships and they’re blessed with superficially perfect lifestyles. They’re jet setters with wads of cash to flitter away on endless trips, swanky restaurants and jewellery, which is why it’s not surprising when recovering alcoholic Brett succumbs to her addiction and falls into a harmful cycle of sex, booze and debauchery with her new lover. Soon she’s back to all her old tricks of lying and covering up, like an archetypal seasoned addict.

Brett’s downward spiral is inevitable from the moment she meets Eduard and because of this, there’s a strange kind of emptiness to their affair, making it more monotonous than sexy. Brett has zero sense of responsibility and loyalty. She pays lip service to caring about her stepchildren and yet she drives under the influence to pick them up, barely even registering what side of the road she’s on. She also claims to love her husband, but she does everything possible to betray and humiliate him.

Despite this, Brett isn’t a dislikeable character. Her actions make her a bad person from a moralistic viewpoint and yet I felt an unexpected indifference towards her, perhaps because she has such a lack of regard for anything other than her new obsession. She’s driven by this need to exist in a constant state of wanting and being wanted, and yet it’s a wholly fake and excessive existence, one that can never flourish or last.

“All these little decisions you make for the sake of your lover are little steps you take away from the person you truly love. That’s not to say you don’t love them both, you do. But one has your heart and the other has your attention.”

Brett’s all-consuming affair with Eduard is the entire plot of this book. We never go beyond their adultery to explore the tropical setting (whether it’s Cancun or Nicaragua, the locations aren’t given much description) or the ramifications of the affair on their families and friends. It’s not about anyone other than Brett and her lover, which makes the story simmer with an almost claustrophobic intensity. Anything further than Brett’s insatiable desire for Eduard, her irrational insecurities and her dependence on alcohol is brushed over, as unimportant to the toxic tale as it is to Brett herself. It makes for an attention-grabbing, yet slightly shallow read.

Such a subject matter would be depressing if it weren’t penned by Martin’s assured hand. He makes the reader feel like a spectator, simply watching Brett’s life unravel without ever feeling like part of her world. Which is just as well, because it’s really not a world you’d want to inhabit for very long. With short chapters, some of which don’t even fill a single page, Love in Central America is the perfect pop-in-your-suitcase summer novella. Just don’t expect to fall in love with the characters; there are no heroes or heroines in this one, and you’re likely to feel a little hollow at the end.

Love in Central America was published by Harvill Secker on 4 August 2016.