Book Review: Love and Other Consolation Prizes by Jamie Ford 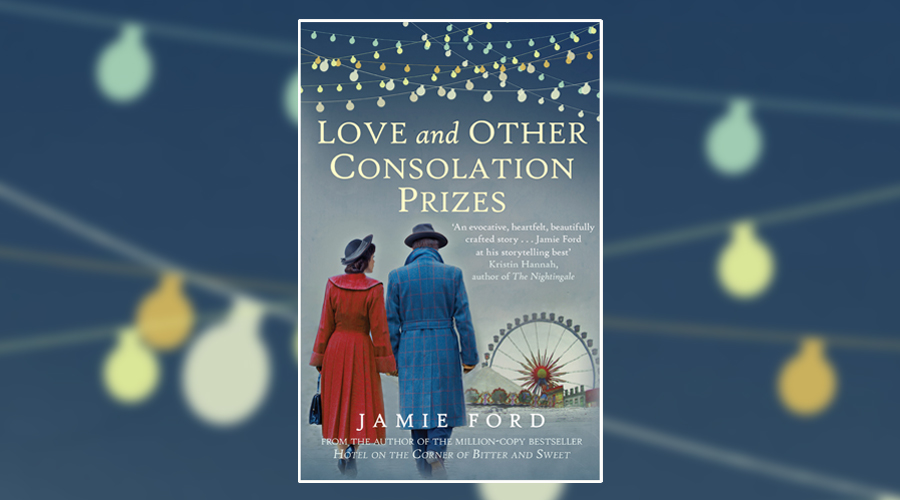 The story Jamie Ford tells in his third novel is a heartfelt and beautiful one, made all the more wondrous by the fact it was inspired by the true story of an orphaned boy being raffled off as a prize at the 1909 Seattle World’s Fair. Unlike in real life, when the owner of the winning ticket never stepped forward to claim their prize of the boy, in Ford’s story 12-year-old Ernest is won by the madam of a high-class brothel, and from there Love and Other Consolation Prizes becomes a remarkable story of growing up, finding belonging and falling in love.

Framed by Seattle’s two world’s fairs – the Alaska–Yukon–Pacific Exposition in 1909 and the Century 21 Exposition in 1962 – Ford begins with the story of five-year-old Yung Kun-ai as he travels from China to America in the cargo hold of a ship along with several other Eastern Asian boys and girls, and follows him as he becomes Ernest Young, a charity student at a boarding school who’s given away as a prize at a fair.

With the new World’s Fair in 1962 stirring up thoughts of the past over 50 years later, the novel flows between Ernest’s attempts to look after his beloved but ailing wife and her scattered memories and his own reflections on his earlier life working in Seattle’s Red Light District, as well how he came to fall in love with two different girls: Maisie, the tomboyish daughter of the flamboyant madam of the brothel, and Fahn, the Japanese maid working below the stairs after being sold into a life of servitude.

“See,” she said, smiling in the afterglow, the flashing, waning colours. “This life – your life, my life, the happy memories, the sad stories, the hellos, the goodbyes, you, me, Fahn – everything is connected, always.”

Having not read any of Jamie Ford’s other works, Love and Other Consolation Prizes was a complete surprise, and an enchanting one at that. It’s a story that unfolds like a mystery, with readers trying to put together the pieces of Ernest’s life in the past and match it up to the picture of his present, while retaining all of the heart you’d expect in a novel about first loves. The characters too feel completely real – good humour, bad decisions and all – and even if some of the connections made between the people and places involved can feel a little stretched at times, it never really dips below the line of unbelievability, keeping readers firmly engaged and completely engrossed throughout.

Ford also has a really subtle understanding of time and place and it serves him a great advantage here. Not only does it allow him to root his novel’s distinct periods in their own history, complete with all the attitudes and societal opinions colouring decisions and actions, but he also honours his own Chinese heritage in his characters, their circumstances and their lives, and it makes for a remarkably refreshing read about the kind of real-life experiences at the turn of the 20th century that often went untold.

Love and Other Consolation Prizes is a gem of a novel, and one that’s worth your time. It’s an incredible story of great scope that’s vividly brought to life by Ford’s lyrical writing, combining strong characters and a detailed sense of place and time to create a sweet and moving tale that will stick with you.