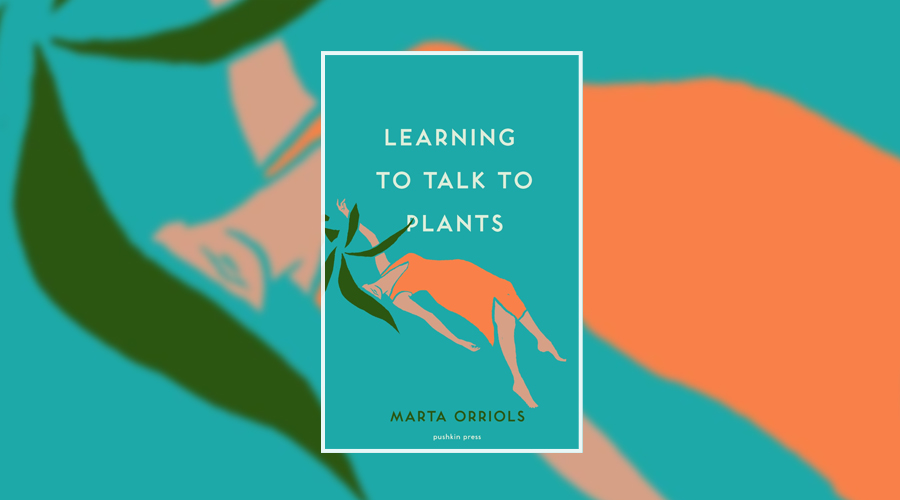 Mauro, Paula’s partner of twelve years, is killed in a car accident. Both compounding and complicating her misery is the fact that, just before he died, Mauro announced that he was going to leave her for another woman. Learning To Talk To Plants follows Paula as she struggles with her own unusual type of grief, whilst working out how to live in a world where everything she thought she knew has been totally upended.

Learning To Talk To Plants, written by Marta Orriols and translated by Mara Faye Lethem, is a stiflingly interior novel. From page one, we are trapped inside Paula’s mind, and it is a dreary place to be. Her grief is convincingly illustrated, but – to be blunt – its circuitous, repetitive nature makes a tedious read. It’s hard to tell whether the problem lies with Orriol’s original text or Lethem’s translation, but the book’s general airlessness is exacerbated by a cavalcade of run-on sentences so winding and laborious you need a map to get from one end to the other.

Although there are a considerable number of other characters – Paula’s father, her handsome American neighbour, friends and colleagues from the neonatal hospital where she works – because everything is so solidly filtered through Paula’s perspective, it never feels as if we get to know them. It doesn’t help that there’s not much dialogue here, either: we are always being told what to think by Paula, rather than having the chance to decide for ourselves. If you happen to find Paula a rather dull character, there’s no opportunity to get away from her.

She makes some strange decisions in this book, decisions that make it even harder to relate to her. Not telling anyone that Mauro was planning to leave her before his death is understandable – it wounded her pride in a way she isn’t eager to advertise – but it does suggest that the isolation she’s experiencing is, in large part, self-imposed. Her unwillingness to communicate is consistently frustrating. Just ask Pep, the first man she sleeps with after Mauro’s death. Their dalliance begins as a one-night stand, becomes something more, and then stops with a whip-lash inducing suddenness. Meanwhile, poor old Pep has absolutely no idea what’s going on. Is he her rebound guy? Maybe? Though for most of Learning To Talk To Plants the issue is an over-exposure to Paula’s perspective, it’s when she stops communicating with us that things get truly maddening.

The strongest scenes of Orriol’s novel are those set at the neonatal hospital, and there are not enough of them. Everywhere else Paula is totally defined by the leadenness of her grief; at the hospital, we get a glimpse of what she was like before Mauro’s death robbed her of a personality. However cold one may be on Paula, the passages where she and two colleagues keep a vigil for a tiny baby girl who isn’t going to make it are undeniably moving.

Countless other authors have proven that it is possible to write about grief in ways where reading their books doesn’t feel like being submerged in a vat of tar. Unfortunately, if you’re planning on reading Learning To Talk To Plants, you’d do well to bring your snorkel.