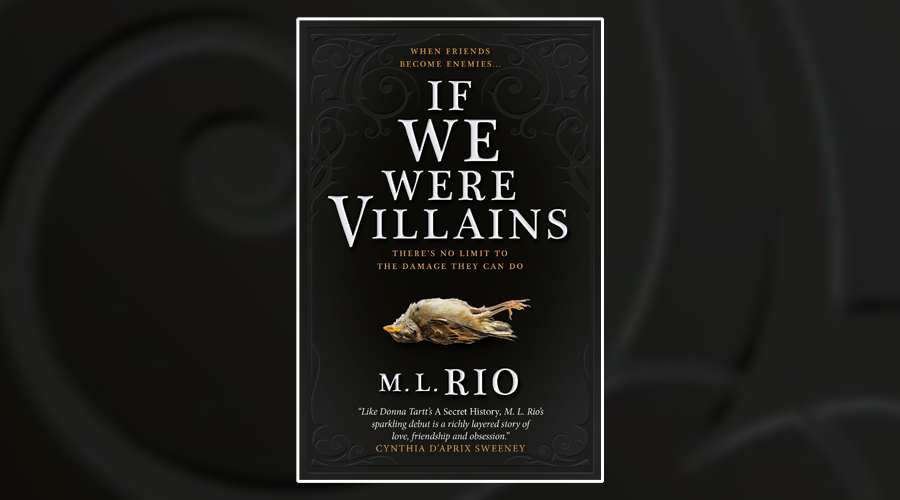 It feels fitting to be writing about M. L. Rio’s If We Were Villains on #ShakespeareSunday – the weekly Twitter event that celebrates the illustrious Bard and his popular works. Rio’s debut is an enthralling literary thriller that’s part tragic love story, part murder mystery, which plays out like all the best Shakespeare stories do – with passion, betrayal, jealousy, revenge and madness.

In the prologue of Act 1, we’re introduced to Oliver Marks, who’s just served ten years for the murder of one of his closest friends. The detective who investigated the crime at the time, Joe Colborne, is retiring from the force and, having never actually believed Oliver was entirely guilty, he wants to finally get to the truth. Oliver has nothing else to lose, and so begins walking Colborne – and the reader – through the events that lead to his incarceration.

The story is structured in acts and scenes as Oliver takes us back to his time as a young actor studying Shakespeare at the elite Dellecher Classical Conservatory in Illinois. With his six close actor friends, Oliver is always cast as the secondary character, a role that transfers into real life too. Meanwhile, Oliver’s friends also seem to merge into their respective parts on and off stage: the hero, the villain, the seductress and the fool, amongst others.

When the teachers decide to mix things up and cast the actors in different roles, the usually good-natured rivalry between the friends begins to turn nasty. Then one of the seven is discovered dead and the rest of the group are forced into the biggest performance of their lives – maintaining their innocence to the police, as well as each other. It’s not long before cracks in their lies begin to show and the characters are consumed by a guilt and suspicion of Macbeth proportions.

“Actors are by nature volatile—alchemic creatures composed of incendiary elements, emotion and ego and envy. Heat them up, stir them together, and sometimes you get gold. Sometimes disaster.”

If We Were Villains is in every way a gripping homage to Shakespeare; from the characters and their obsession with the playwright, to the way their lives take such tragic turns, to the language that Rio uses. It’s slow to set up the scene of death, building the distrust and tension so that every character has reason to commit murder in the end. It’s their collective descent into madness – and the tragic love story that emerges – which makes this such an engrossing and intelligent page-turner.

Like the characters in the story, I was bordering on obsession as I tried to piece together the events that led to one character’s death and the other characters’ consequent fall from Shakespearean grace. Rio’s prose has an elegant, effortless quality, with dialogue that would be obnoxiously pretentious until you realise that it’s supposed to be exactly that.

The best thing about If We Were Villains is that you don’t have to be mad about Shakespeare to get carried away with the story (though it’s inevitably a more gratifying experience if you are). It’s dramatic and disquieting, with a particularly bittersweet end, marking M. L. Rio as an author to watch out for in the future.