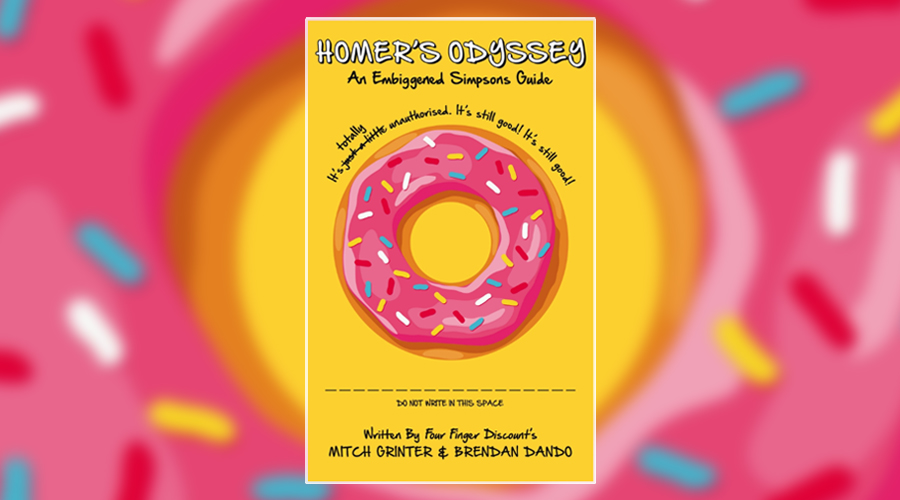 The Simpsons is not as good as it used to be. That is a sentiment shared by pretty much everyone familiar with America’s most famous cartoon family, including Mitch Grinter and Brendan Dando, co-authors of Homer’s Odyssey. But that isn’t what the two Australians choose to dwell on in their first book.

No, Grinter and Dando, best known for their popular Simpsons podcast Four Fingered Discount, have penned an unabashed love letter to the cartoon they both adore. Homer’s Odyssey is comprised of reviews, transcripts of Grinter and Dando discussing the first nine seasons, lists of their all-time favourite episodes, tributes to Treehouse of Horror shows, and many, many interviews.

The piecemeal nature of Homer’s Odyssey means that it never really feels like a book; more a selection of lists and articles that a fan has compiled. A lack of organisation amongst these chapters results in us being told the same information repeatedly. It got to the point where I was audibly sighing every time Grinter, Dando or one of their interviewees mentioned how much Albert Brooks liked to improvise when he was on set, or how Conan O’Brien changed the direction of the whole show. Considering that the two men are credited on just eleven episodes of The Simpsons between them, they get an oddly disproportionate amount of attention here.

Homer’s Odyssey is at its best when the authors are talking about the effect the show had on them as children, living in Australia. It’s interesting to learn what a big deal it was for them when the Simpsons made the trip to Oz, or how much publicity was thrown at the whole ‘Who Shot Mr Burns?’ mystery.

Some of their anecdotes are less engaging, however. One that particularly stands out runs to nearly two pages, the upshot being that one of the authors discovered that the episode ‘Radio Bart’ was based on Ace In The Hole whilst he was watching TV in New York City. Did we need to know that? Was that story worth all those words? Some tales really are better left untold.

Coming from the land of podcasts, Grinter and Dando are clearly more comfortable with speaking than writing. A great many of the chapters are just transcripts of conversations they’ve had with each other, or with creatives responsible for The Simpsons. There’s nothing wrong with this exactly, but it makes you wonder why they felt the need to write a book in the first place. Their prose does tend towards clunky. Both men prefer to use ten words where five would have done.

Perhaps the biggest problem with Homer’s Odyssey is a lack of new information. Sure, it doesn’t want for individual facts; there’s a 140-question trivia quiz included that is bound to entertain die-hard fans. As a whole though, it lacks a substantive reason for existence. The Simpsons is one of the most written-about shows in TV history. It’s difficult to see the point of yet another book about the programme that doesn’t add anything new to the conversation.

Homer’s Odyssey is written with a lot of love, and that goes some way towards papering over its faults. Unfortunately though, not far enough; the repetitiveness, awkward prose and dearth of new information make it a difficult book to trudge through, despite the levity of the subject matter. A disappointment.

Homer’s Odyssey: An Embiggened Simpsons Guide was published by Century on 2 November 2017