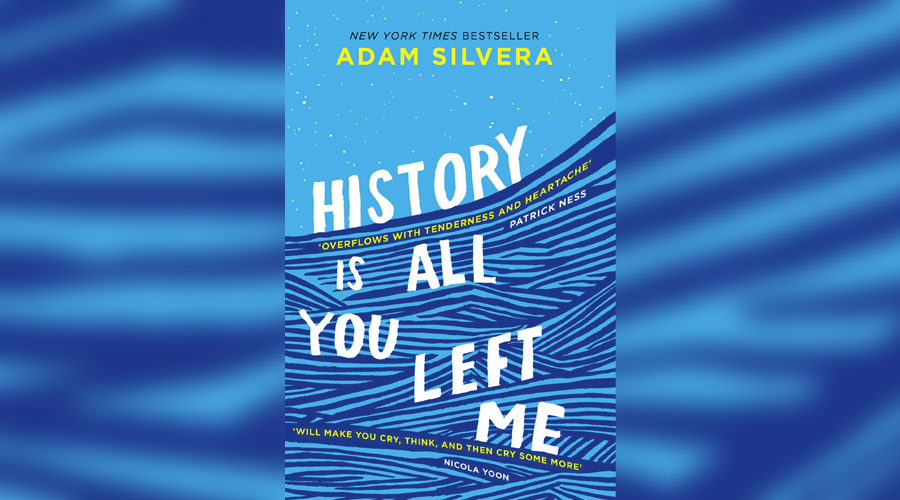 Adam Silvera’s YA novel, History Is All You Left Me, is the type of story that you start reading knowing full well that it’s going to break your heart. And yet, through all the grief, loss and despondency the book holds within its 293 pages, it’s also a tale about young love, friendship and acceptance of the things we can’t, but inevitably try to, control in life.

When seventeen-year-old New Yorker Griffin breaks up with his boyfriend, Theo, who’s heading to college in California, he thinks he’s doing the right thing. He’s setting Theo free so that they can reunite when they’re older. They’re each other’s end game, just not right now. What wasn’t part of Griffin’s plan was Theo dying in a freak accident and never coming back to him, particularly as Theo promised, after a near miss with a car, that he’d never die.

If you’ve experienced love and loss, you’ll know that Theo’s blithe promise is a throwaway one he can’t possibly keep. After all, who knows what the future has in store? And yet Griffin holds Theo to it, filled with anguish and anger at having lost the one person who meant everything to him, even though Theo was dating someone else at the time he died.

Moving between ‘Today’ and ‘History’, the story begins with the day of Theo’s funeral, where a grief-stricken and OCD-afflicted Griffin isn’t ready to say goodbye to the first boy to love him unconditionally. It then goes back to the day Theo and Griffin came out and admitted their feelings for each other. In the past we explore their tender friendship turned romance, a relationship of firsts for both of them, leading up to the moment Theo has to leave for college and Griffin feels compelled to break their seemingly perfect bond.

“I feel like a rock being skipped through the ocean – pain, relief, pain again, relief again, eventually destined to sink.”

In the present, Griffin’s life has stopped moving forward; he can’t face school, he’s alienated his and Theo’s mutual best friend, Wade, and he’s just trying to understand how something so devastating could happen to someone with so much to offer the world. In a bid to gain an insight into what Theo’s life was like after they broke up, Griffin befriends Theo’s boyfriend, Jackson. It’s not an easy alliance, considering the two hated each other when Theo was alive, but their shared grief draws them together, each finding a mixture of comfort and pain in the other’s stories and memories of the boy they both loved.

Silvera has captured the different facets of young love perfectly; the excitement that comes from finding it and the hurt that comes from reluctantly letting it go. All those small, intimate moments of a relationship are explored alongside the big, grand gestures, and everything feels so urgent and intense. Griffin is a boy who lives very much in his own head, hence the constant conversations he has with Theo, despite the fact Theo isn’t alive to answer, and his idea of the truth is just one version of it.

There’s a profound message at the heart of History Is All You Left Me about everyone having their own version of history; no two people remember or experience something exactly the same way. And, as Griffin comes to realise, sometimes you can find solace in the most unlikely of sources, bringing about an entirely new perspective.

This is a book that will make your heart burst with tenderness and ache with sadness. It’s that rare sort of life-affirming story that makes you want to hug the people you love and treasure every moment with them.