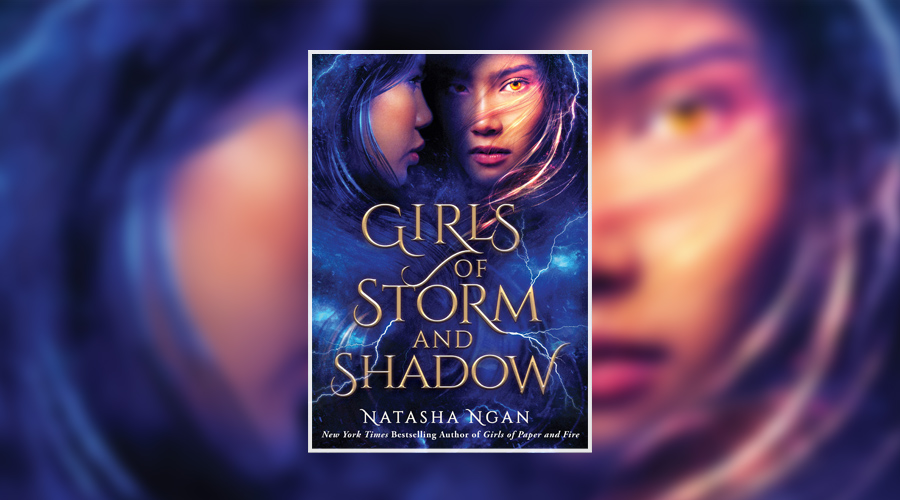 At the end of Girls of Paper and Fire, our heroine Lei was fleeing for her life after slaying the brutal Demon King. With Wren – the girl she fell in love with whilst they both served as the King’s concubines – by her side, Lei allowed herself to feel something she hadn’t felt for a long time: hope. It’s a feeling that was short lived for readers as we learnt in the book’s epilogue that the threat to their lives still remained, and it’s an even bigger gut punch when Lei and Wren discover what we already know – putting them on the run, in more danger and despair than they were before.

Natasha Ngan’s sequel, Girls of Storm and Shadow, reunites us with Lei – now known as the Moonchosen – and warrior Wren as they visit rebel clans to gain support in the impending war against the court. It isn’t helped by the fact that Lei has a bounty on her head and Wren is struggling under the weight of both her family obligations and the ancient magic coursing through her veins. With both girls feeling the strain of being fugitives, Lei’s doubts over the ruthless path they’re taking to overthrow the monarchy threatens to tear them apart from within.

Whilst Lei, Wren and their motley crew of disparate insurgents travel the far-flung kingdom, an evil plot to eliminate the rebellion is taking shape, one that’s fuelled by dark magic, revenge and pure hatred. War can make monsters of the most kind-hearted people and Lei has to decide what’s more important to her: love for another person, allegiance to a cause or staying true to herself. The answer isn’t immediately clear and it’s something Lei grapples with throughout the book.

“Wren and I might not be Paper Girls anymore, but we are still capable of creating fire. And now we have a whole world to burn.”

Girls of Paper and Fire was Lei’s story and though Storm and Shadow is also told almost exclusively through her eyes, it’s more of a two-hander. Wherever Lei is, Wren is always close by, and their bond flows across the pages. Which makes it all the worse when fractures in their relationship begin to show. Wren is single minded in her mission to bring down the Demon King’s rule; woe betide anyone who gets in her way. But Lei struggles with the human cost of their conflict, the villages burnt, the innocent lives lost. They both want the same thing but their differing methods of trying to achieve it constantly puts them at odds. An enjoyable aspect of this novel is seeing how both girls have developed – together and individually, for better or worse – from the first book.

Storm and Shadow takes the action away from the Demon King’s tyrannical palace, traversing the unique and expansive Asian-inspired world that Ngan has created. It is sweeping and diverse, ranging from snowy mountain ranges to sandy desertscapes to the wide open sea. We also get to meet new clans and rebel factions, which gives greater breadth to an already exquisitely imagined world. What also sets Ngan’s story apart from other fantasy series is the multifaceted nature of her characters; we don’t have plain good or bad here. Everyone has the capacity for doing terrible things, even if their intentions are good, and it makes for an unpredictable read.

This is a tale of women and girls rising up and standing against men who seek to control, mistreat and manipulate them. In our own oppressive world, we still need more books that empower and inspire girls to be not only fierce but also kind and empathetic at the same time. Where this book falls down is in its pacing, with certain parts feeling like filler as we bide our time until the next book’s inevitable showdown. It’s the kind of story that would have been better suited to a duology, cutting out the bloat that makes select chapters drag. However, there is one benefit of a trilogy, and that’s more time with Lei and Wren – who, despite the filler, are one of the most engaging couples in recent YA fantasy.

If Girls of Paper and Fire ended with a sense of hope, Girls of Storm and Shadow finishes with a shattering feeling of hopelessness, taking us into the concluding book with our characters scattered. They’ve got everything to lose and everything to fight for, meaning we’ve got every reason to be excited about the final installment in this spellbinding series.