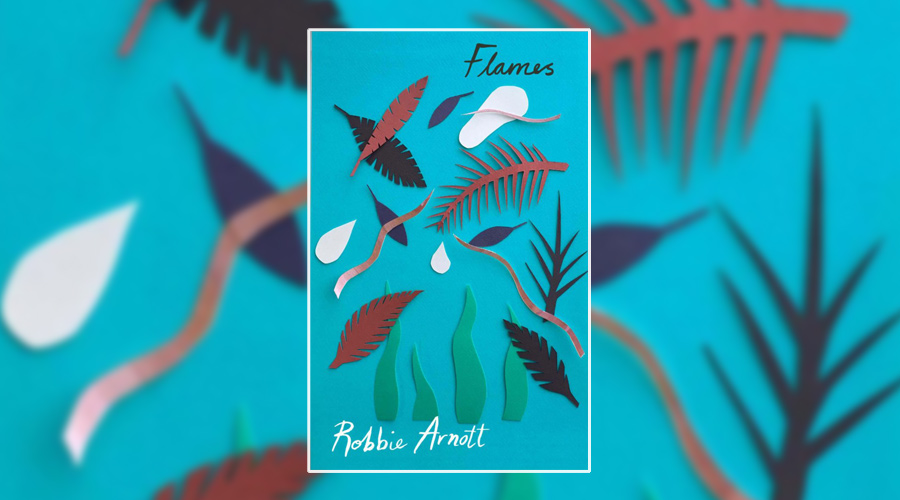 Somewhat fittingly, trying to describe Flames is like trying to hold smoke between your hands. However much of a grip you think you have on it, it always seeps out, refusing to be caught. I’ve been trying all week to accurately describe this book I have been enjoying to anyone who would listen, but so far have been resoundingly unsuccessful. I beg your patience as I try again now.

Flames is set on the Australian island of Tasmania, where Charlotte, a young woman who can shoot flames from her body, lives. Aware that in their family, dead women reanimate to live a brief and tortured second life, Charlotte’s brother Levi sets out to build a special coffin to stop her sharing the same fate. Being young and in perfect health, Charlotte is terrified by his plans, and heads off across the island to put as much distance between herself and Levi as possible. Throughout the book, various characters get embroiled in this inter-sibling escapade, amongst them a female private detective, a cloud god, a rain god, a cantankerous coffin maker, and a wombat caretaker.

Part of the wonder of Robbie Arnott’s first novel is watching the way in which he casts his narrative net so widely and then reels it back in with such precision. For the first half of the book, each chapter is told from a new character’s perspective. It sometimes takes a while into a chapter before you figure out the connection, and that moment of realisation is always enjoyable – the best of these is when it becomes apparent that the rodent that curls up next to Charlotte when she is sleeping on the beach is actually a river god. As each player in the tale passes the narrative baton forward, Flames becomes wider and richer. By the time he starts pulling all his threads back together for the satisfying finale, we’ve been on quite a ride.

In addition to a dazzling array of characters, Arnott exhibits a knack for an impressive range of styles. If you were to pigeonhole the book into one category, it would be fantasy. Flames keeps one foot in reality at all times, but the woman who disgorges fire from her body yanks the other foot into the realm of the fantastical, where it flies alongside the gods. Also on display here is a rapturous romance, a Sam Spade-esque private investigator, a horror tale with an unlikely villain, and plenty of snort-inducingly funny comic passages. With so many different genres to juggle, it’s almost a surprise that Arnott never loses his narrative through line, not even for a moment. His book may be mysterious and wild, but it could not be accused of being unfocused.

Flames is a spectacular novel; exciting and spirited, overflowing with imagination. Arnott invites us in to a thrilling new world where everything may look familiar, but there are magical surprises to be discovered around every corner.  Join him on the journey, and you will not be disappointed.

Flames is published by Atlantic Books on 1 November 2018