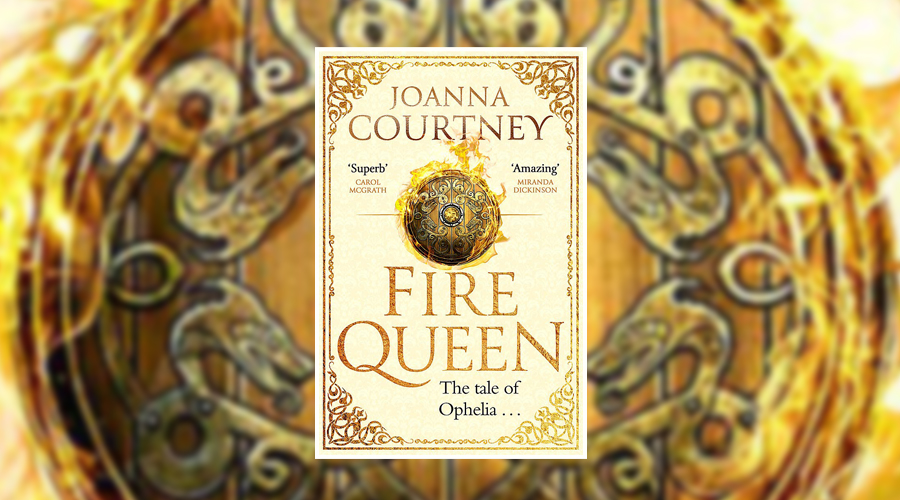 The story of Shakespeare’s Ophelia is one that most of us will know, even if it’s only in passing. In the play, Ophelia is a young noblewoman who’s romantically involved with Hamlet but whose life (and death) is ultimately decided upon by all the men in her life, and she ultimately spirals into madness and her story ends in tragedy. Joanna Courtney’s Fire Queen, the second book in Courtney’s Shakespeare’s Queens trilogy, sets out to turn that story on its head, presenting Ofelia as a skilled warrior, a confident leader and a fiercely independent young woman who remains unflinchingly loyal to her friend and Prince – and, in doing so, Courtney has given one of Shakespeare’s most tragic characters new depths, new understanding and new life beyond the Bard’s pages.

In Fire Queen, Ofelia’s story begins with the character as a young girl, watching as her mother threw herself onto her father’s funeral pyre, something that was praised as the “ultimate sacrifice”. For Ofelia, however, it was the fate that awaited a devoted wife, and it’s the moment that she swore that she would never belong to any man and become second best. Years later, Ofelia is a force to be reckoned with, becoming Hamlet’s, the newly-crowned Prince of Denmark, right-hand woman and constable, and swearing her loyalty and her sword to only him. The one thing that she doesn’t offer Hamlet, however, is her hand in marriage, no matter how much he asks for it.

When Hamlet’s jealous uncle begins plotting against him, Ofelia is determined to protect him through any means necessary, setting up a journey that sees Hamlet and Ofelia driven out of Denmark and towards the Angles and the court of King Aethelfrith of Bernicia. Ofelia is by Hamlet’s side through everything – including battles and political allegiances – and uses every skill and wile at her disposal to ensure that Hamlet remains safe and can return to Denmark to claim his rightful place on the throne. But in the end, it could be Ofelia’s heart that proves the greatest betrayer of all.

“Ofelia was made of steel, tempered and hardened in her parents’ funeral pyre, and no one, not even Hamlet, would grind or bend or shape her to their own ends.”

This is the story of Hamlet and Ophelia re-told, yes, but it also goes far beyond the two people at its heart, digging deep into history, politics and warring kings and their courts to craft a rich and vivid context in which the story can unfold in all of its deeply intricate and realistic detail. And what truly incredible detail it is too. It’s clear from the very first page that Courtney has put a lot of careful research and all of her due attention into Fire Queen, and in doing so she brings the 7th Century world of her story to life effortlessly, drawing from the Scandinavian legend of Amleth and rooting her story in her characters’ Norse religion, festivals and traditions.

While the world-building of this novel is truly impressive and immersive, Fire Queen is, ultimately, driven by its characters, all of whom are complex, flawed and authentic figures. Ofelia, unsurprisingly, is the standout, drawn as a sincere, strong-willed and passionate character who values loyalty and duty and stands by her choices, her men and her friends through everything. Her arc is a refreshing and historically sound one, giving readers a female character with agency and a society that doesn’t condemn her for not choosing the typically female role. Hamlet, too, is a brilliant character and also the one who perhaps shows the most development, growing from a young, relatively carefree and hopeful young man into a determined, driven and impressive ruler.

But this is also a historical epic in every sense of the word, and the action ripples out even further than the story at its core – that of Ofelia, Hamlet and the battle for Denmark’s crown – to varying degrees of success. From the second part of this novel onwards, Denmark is a constant presence, but not the immediate concern. Instead, Fire Queen takes readers across to Bernicia, delving into the royal court of King Aethelfrith and his daughter Flora and his own battles for land against Dal Riata and its King Aedan, wars that Hamlet and Ofelia are drawn into as they’re left waiting and building up their own army to attack Hamlet’s uncle Feng in Denmark. There are strong elements in these parts of the novel – the battles are re-told in incredibly evocative detail and Flora is a wonderful character in her own right, while her relationship with Ofelia is a fascinating one to see unfold – but it also ended up veering a little too far away from the central aspects of the story for me, becoming more of a novel about warring clans and clashing religions for longer than I was anticipating.

Joanna Courtney’s Fire Queen is less Hamlet re-told and more Hamlet as it really happened, so anyone expecting an alternative slant on the Shakespeare play is going to be left disappointed. Instead, Fire Queen offers up a historical fiction novel at its finest, with strong, bold characters and a rich setting that’s brought painstakingly to life in sharp and accurate detail. It’s also a true epic, spanning heroic quests, royal courts, love, war, marriage, politics, murder and more. While Fire Queen is therefore perhaps just a little too long and a little too broad in scope for some readers, there’s no denying that it has been wonderfully written and maintains a quick, exciting pace throughout, making this a completely absorbing, wholly entertaining and riveting read.

Fire Queen was published by Piatkus on 17 September 2020