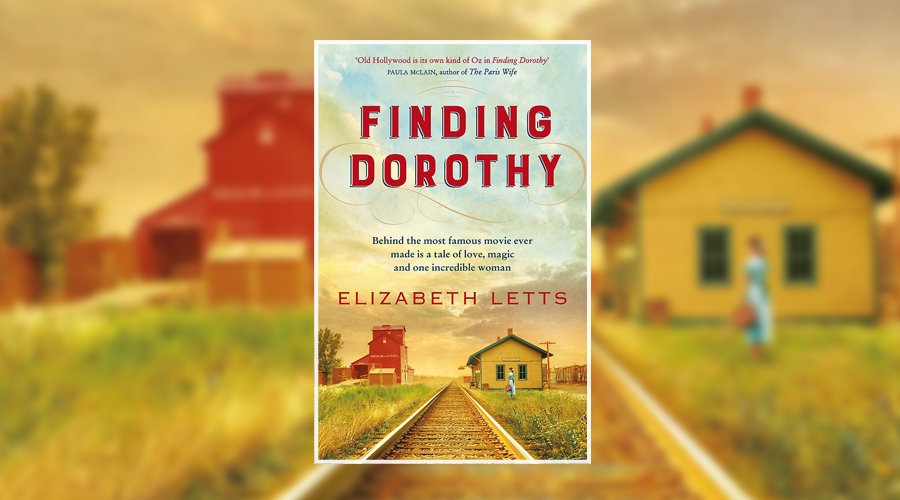 Whether you’re experiencing it for the first time or reacquainting yourself with the Land of Oz, 2019 feels like the perfect year to travel down the yellow brick road to Emerald City with Dorothy Gale. This May will mark 100 years since author L. Frank Baum died, whilst 22 June is the 50th anniversary of Judy Garland’s death. Later in the year, on 25 August, fans and cinephiles the world over will celebrate the 80th anniversary of Victor Fleming’s musical adaptation, The Wizard of Oz – which remains one of the most celebrated and beloved movies of all time.

Tying into all these anniversaries is Elizabeth Letts’ Finding Dorothy – the evocative and captivating story behind Baum’s The Wonderful Wizard of Oz, the timeless book that inspired the iconic film. Told through the eyes of Frank’s courageous wife Maud, Letts’ novel invites readers to take a peek behind the theatrical curtain of old Hollywood as an elderly Maud visits the M-G-M movie set nineteen years after her husband’s passing. She wants to impart the enchanting spirit and secrets of the book on the cast and crew but the studio execs are more concerned with dollar signs. Witnessing how the film’s young star Judy is exploited and mistreated, Maud’s vow to uphold her husband’s story soon evolves into a mission to protect the real-life Dorothy too.

Alternating between the late 19th century and 1930’s Hollywood, the novel moves through the years with Maud, exploring her rebellious youth under the guidance of a trailblazing suffragette mother, and then her courtship and eventual marriage to the charming thespian Frank. Maud is utterly devoted to her husband but he’s a dreamer and their life is a struggle as they suffer financial, personal and societal hardships. Throughout it all, Frank’s endless optimism and creativity keeps them going in spirit, whilst Maud’s tenacity holds the family together when it comes to more practical matters. What resonates is their devotion to each other; Maud’s steadfast belief in her husband and Frank’s desire to create a wonderful, colourful world for children to escape into.

“Magic isn’t things materializing out of nowhere. Magic is when a lot of people all believe in the same thing at the same time, and somehow we all escape ourselves a little bit and we meet up somewhere, and just for a moment, we taste the sublime.”

In the Hollywood chapters, Maud battles against the studio execs and Judy’s stage mother, who all seem to put the movie’s success ahead of the teenager’s vulnerability and personal happiness. It’s a fascinating insight into the early days of Garland’s career, made all the more affecting if you’re familiar with the actress’s turbulent adult life. The magic of the story remains with the Baums though, and Frank’s journey to creating the iconic children’s novel and subsequent sequels we know and love so well. If Frank is the magic, then Maud is the heart. Described by Letts in her afterword as a ‘tour de force, completely unlike most Victorian women’, she’s as compelling a character as Dorothy herself.

The inspiration behind Letts’ story came from a 1939 photograph, which showed Maud and Judy sitting next to each other on set, reading The Wonderful Wizard of Oz. Imagining what the two talked about as a starting point, Letts has crafted an impeccably researched historical novel with a biographical edge that blurs the lines of fact and fiction. It’s a romantic, nostalgic and authentic novel peppered with real anecdotes about Maud, Frank and the making of the movie that’s so embedded in pop culture. With a Judy Garland biopic due for release in September, there’s never been a better time to delve into the actress’s big break – discovering an even more intriguing story about the Baums in the process.

Finding Dorothy is published by Quercus on 4 April 2019