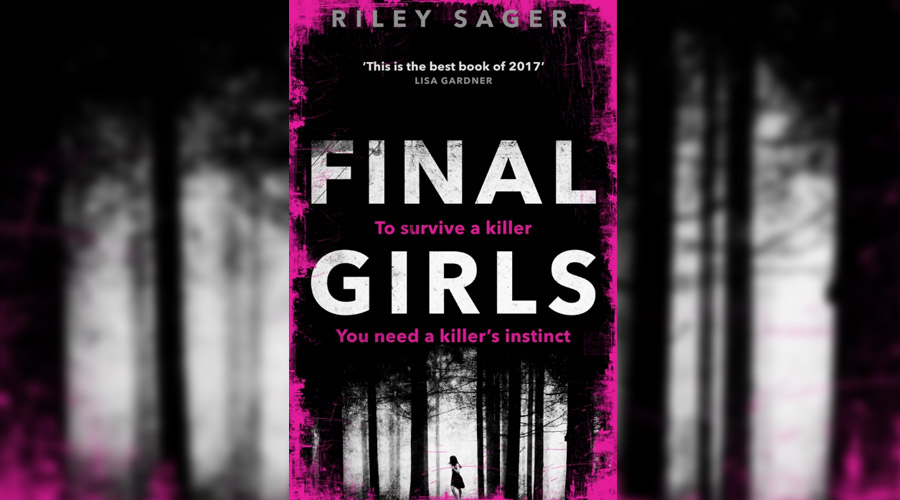 If you’ve ever watched horror films, you’ll be familiar with the ‘Final Girl’ trope; she’s the girl who runs the fastest, fights the hardest and ultimately survives when nobody else does. There’s Halloween’s Laurie Strode, A Nightmare on Elmstreet’s Nancy Thompson and, perhaps the most obvious horror heroine of recent times, Sidney Prescott, who kept breathing through all four Scream movies. Riley Sager’s Final Girls introduces a brand new heroine to the scene – one who’s worthy of a place in the Final Girl hall of fame alongside the aforementioned movie characters.

It feels right to be referring to cinema when talking about Sager’s debut, which reads like a modern-day slasher flick mixed with elements of psychological suspense. Quincy Carpenter is the sole survivor of a massacre that claimed the lives of her five college friends. She’s worked hard to move on from the Pine Cottage tragedy, something that’s aided by the fact she can’t actually remember the events of that fateful night. The massacre was so horrific that Quincy blocked it out and gave herself what she describes as a “self-performed lobotomy”, otherwise known as repressed memory syndrome.

Quincy is famous for being a Final Girl but she’s not the only one. Grouped together with two other women who survived similar massacres, they become an infamous trio linked by their shared trauma. When Lisa, the first Final Girl, dies in suspicious circumstances, Quincy feels like she didn’t do enough to help. Then Sam, the second Final Girl, arrives on Quincy’s doorstep and immediately stirs up trouble with the press, the police and Quincy’s boyfriend, Jeff. Quincy’s carefully constructed life – held together by therapeutic baking and a steady supply of Xanax – begins to unravel, as Quincy starts to wonder if Sam’s sudden reappearance has anything to do with Lisa’s death.

“We were, for whatever reason, the lucky ones who survived when no one else had. Pretty girls covered in blood. As such, we were each in turn treated like something rare and exotic. A beautiful bird that spreads its bright wings only once a decade. Or that flower that stinks like rotting meat whenever it decides to bloom.”

Final Girls alternates between Quincy’s life post-Pine Cottage and that fateful trip which began with a group of carefree students arriving at an isolated cabin in the woods for birthday celebrations and ended with all but one dead. Any suspects that arise early in the book will find themselves in close competition with any given number of characters, who all seem like they could have something to do with both the Pine Cottage massacre and Lisa’s death.

Quincy and Sam are unreliable, damaged and psychologically unstable, which makes it difficult to trust anyone’s version of ‘the truth’. It’s clear that Sam is a bad influence on Quincy, but why she’s probing into her memories and pushing her towards destructive behaviour isn’t so obvious. By giving bite-size glimpses into what happened the night Quincy became a Final Girl, Sager slowly offers puzzle pieces to readers, never in a hurry to give away too many clues at once. It’s this approach that keeps the book so tense and engrossing.

Filled with suspense, mystery and a few slasher scares, Final Girls pays homage to the sub-genre trope, whilst putting a fresh spin on it too. The book has been hailed by Stephen King as ‘the first great thriller of 2017’ and he’s right. With an end that hits you in the heart like a sledgehammer, I’d go one better and say it’s the best thriller of 2017.

Final Girls was published by Ebury on 13 July 2017