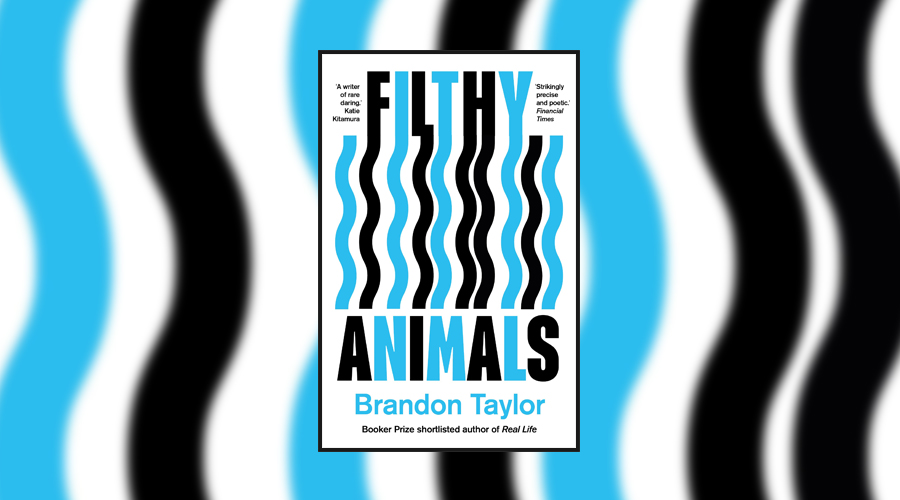 Lionel, making his first tentative steps back into the world after a suicide attempt, attends a college party. Although he’s deeply uncomfortable, he manages to find a mutual kinship/attraction with Charles and his girlfriend Sophie. An unusual three-way relationship begins, and we follow it through linked short stories set over 36 hours. Interspersed with this central narrative are separate tales: a young terminally ill woman tries to reconcile her homophobic grandfather and gay brother in What Made Them Made You, a babysitter unravels in Little Beast, a man is frightened by his capacity for violence in As Though That Were Love.

The connective tissue in Brandon Taylor’s Filthy Animals takes a little getting used to. The collection comprises of eleven stories; the Lionel-Charles-Sophie plot is the main focus of five and a tangential aspect of one. All the tales have a lot in common. Two involve young people confronting their mortality. Half – including the Lionel-Charles-Sophie cycle – foreground sexual violence that sits in a discomforting middle-ground between consensual and non-consensual. Most feature protagonists contending with feelings of inadequacy and insecurity in the face of an unexpected turn of events.

The thematic consistency across Filthy Animals is a positive when it comes to establishing tone and the motifs that most interest Taylor, although it does mean that a couple of the stories feel a little redundant; What Made Them Made You’s contention with intimate violence is superseded by the Lionel-Charles-Sophie narrative in a way that arguably renders it obsolete. And a few of the disaffected characters – the men, in particular – have the tendency to blend into each other. Taylor’s melding of a continuing narrative with separate stories is interesting, but it isn’t always conducted seamlessly.

Whilst, when considered as a singular work, Filthy Animals both doesn’t quite hang together and hangs together too well, on an individual basis many of these stories are beautiful. Taylor’s prose is a beguiling mix of cool and sensual. His characters speak with a provocative, sometimes cruel bluntness that belies their vulnerable hearts. It is not a friendly world that these people inhabit; any kindnesses are stuffed deep down beneath surfaces made of grit and steel. Yet, despite their hard exteriors, despite the brusque ways in which they treat each other, you can’t help but feel for them.

The best story in the collection is also the warmest. Anne Of Cleves follows Marta, who, after breaking up with her long-term boyfriend, embarks upon her first romantic relationship with a woman, Sigrid. The two don’t have a lot in common – Sigrid works in academia and Marta in an engineering plant – and at first that makes the already tentative Marta feel even more unsure about her new situation. Gradually though, she acclimates. She learns to let her guard down. And we watch as her newfound comfort with herself and her partner results, for the first time in her life, in something like inner peace. In a book that aches with angst, the love story of Sigrid and Marta arrives like a cool breeze.

Filthy Animals is published by Daunt Books on 24 June 2021