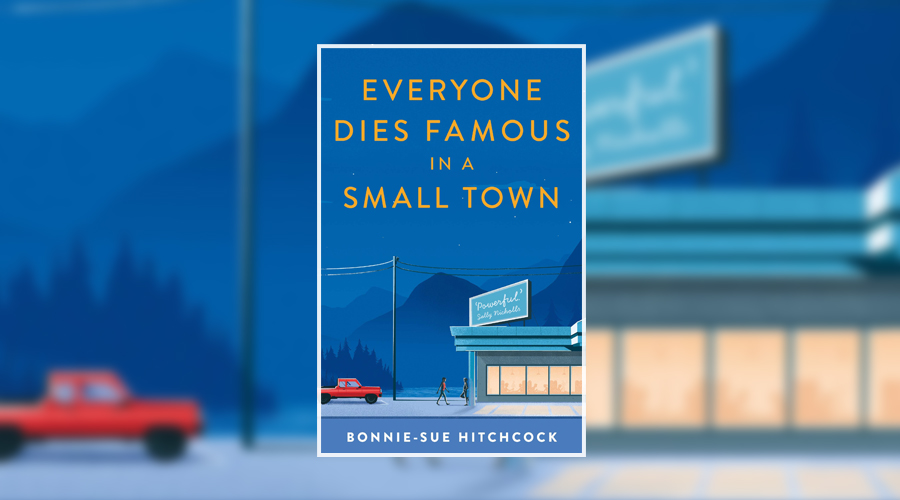 Bonnie-Sue Hitchcock’s Everyone Dies Famous In A Small Town is a short story collection about the complicated lives of teenagers all throughout the American West. Although these are self-contained stories, each is linked to the one that follows it – a secondary character in the first will become the focus of the second, a wildfire in one town will be about to ravage another, etc. Taken as a whole, these tales illustrate the vivid lives of teenagers living in those podunk places where you might think, wrongly, that nothing ever happens.

As a matter of fact, the chief issue hampering Everyone Dies Famous In A Small Town is that too much happens. Hitchcock’s stories are full of action and drama, which sounds appealing – and it is, sometimes – but also ends up becoming a problem. By the time each has established its connection to the one that came before, introduced its large cast of characters and whatever dramatic event that they’re contending with (fires, bear attacks, car crashes, missing children), we’re on to the next. You’ve barely learned these people’s names before its time to say goodbye. It all feels a bit overstuffed, and that can make for tiring reading. The overwrought nature of these plot points also undercuts the otherwise evident desire of this collection to portray a representative experience of the teenagers Hitchcock writes about – are their day-to-day lives really so very much the stuff of soap operas?

Still, there are worse complaints you could level against a short story collection than that it has an overabundance of drama. If anything, it’s a compliment to Hitchcock that a few of these stories appear to have enough plot and character to sustain a whole novel. There’s a timeliness to some which saves them from feeling too overblown; it isn’t difficult to imagine where Hitchcock might have drawn her inspiration for conspiratorial radio host Coyote Jones and his fervent fanbase, and the wildfires that are a foreboding presence throughout most of the stories recall those that caused record-breaking devastation throughout California and Oregon last year.

Hitchcock is adept at vividly depicting the various locales in which her characters find themselves, particularly her native Alaska; in the collection’s first story, ‘Angry Starfish’, you can feel the icy air exuding from the pages. It’s not just the landscapes, but the prevailing moods of these places that Hitchcock captures so well. From the ‘Basketball Town’ unwelcoming to anyone who isn’t wild about the sport, to the stultifyingly monied world of ‘The Right Kind Of People’, Hitchcock always makes it clear why many of her teenage protagonists feel stifled by their environments.

Even though most of her readers will be unable to relate to the more sensationalistic plot points in Everyone Dies Famous In A Small Town, the depiction of a generation of wistful, restless young people eager to leave their hometowns behind and go striding towards a better future is as timeless as you can get.