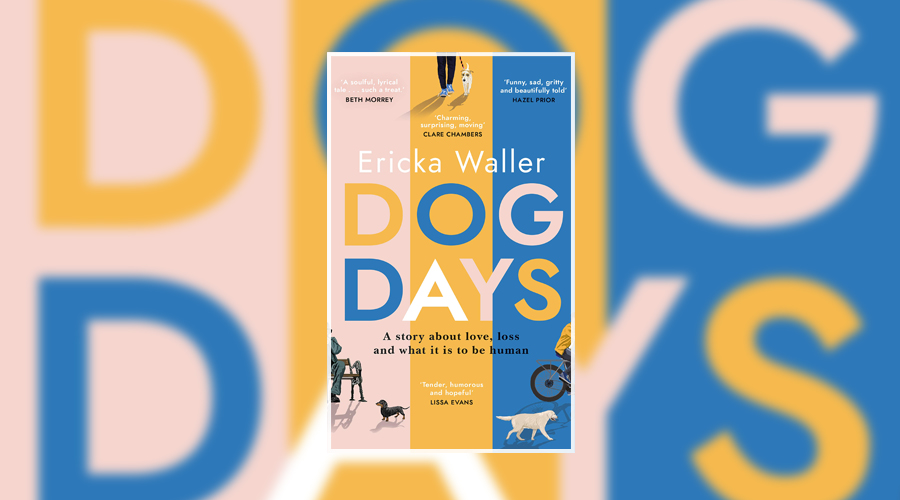 Dog Days, the debut novel from Brighton based author Ericka Waller, follows three characters struggling with life. There’s George, who, having thought he’d live out his twilight years with his wife at his beck and call, is furious that she’s upped and died on him. All he wants to do is sit in his underpants and shout at the cricket. He certainly doesn’t want Betty – his bustling neighbour – trying to rescue him. Then there’s Dan, a shy counsellor with OCD, who helps other people but doesn’t have the answers to his own problems. And finally, there’s Lizzie, who’s living in a women’s refuge with her son, and has shut herself off from the rest of the world as a coping mechanism.

All three characters have different struggles, but they have one thing in common: dogs. George has been bequeathed Poppy, the dachshund puppy his wife brought home before she died, but he wishes the dog would just run away, rather than shower him with affection. Dan’s labrador Fitz is his whole world, his most meaningful relationship so far, but he can’t be Dan’s substitute for a boyfriend forever. Unlike George and Dan, Lizzie’s dog isn’t her own, but rather the refuge’s resident terrier, who seems to sense that Lizzie is keeping a secret that’s bound to unravel eventually. With their canine companions by their sides, these three characters must learn to let go of the leashes they’ve made for themselves in order to let the light back into their lives.

Dog Days is the kind of novel that slowly poodles along, like an aging dog that refuses to walk any faster than it wants to. It’s only as I got to the end, and felt a sense of bereavement at saying goodbye to the motley cast of characters, that I realised just how quietly and easily Waller’s book had crept its way into my heart. Going by its cheerful cover, you might expect the story to be a light, fun read about humans and their dogs – which isn’t an untruth as such; it’s just that this book has a hidden depth that readers might not be expecting. It’s deceptively affecting and the characters’ resonate all the more because they’re so ordinary; they might be your next-door neighbour, your friend, your cousin, perhaps even you – all of them just struggling along, living as best they can in a world that’s not always kind.

Each of the characters’ stories offers a unique perspective on life. George is grouchy, rude, sexist and mildly homophobic. He should be thoroughly detestable. Yet you can’t help but warm to his grumpiness. He grew up in a different era and whilst it doesn’t excuse his behaviour, it’s easier to forgive, and you want him to learn to treat the people around him better. Dan’s OCD is all tangled up in his inability to be open about who he is – a gay man. He’s hiding his true self from the world and it’s a shame, because he’s a loving, caring, intelligent soul. When he gets a chance at romance, you want him to grab it with both hands. Lizzie’s single-minded love and fear for her son is understandable but it’s also claustrophobic – though the reasons for this become more and more clear as the puzzle pieces of her marriage, and the reason she’s in the refuge, slot together.

Waller has a lyrical way of weaving words that perfectly encapsulates a feeling or thought. Her story is firmly rooted in British life – from the South East seaside location to the stoic attitudes of the characters (bar George, who says exactly what he thinks). For the most part, the central characters don’t interact with each other, they barely even know each other, but the story is about how their respective journeys – through love, loss, grief, guilt, OCD, anxiety and depression – brings them together, albeit briefly, in the end. Naturally, with a title like Dog Days, the doggos play an important part in the story too, and they’re instrumental in the characters’ recovery and growth, even if all they do is sit by their human’s side, offering warmth and quiet camaraderie during dark moments.

Funny, sad and reassuringly sage, Dog Days is a story of humanity, family and life. It’s also a heart-warming tribute to dogs in all their breeds, sizes and temperaments. If you don’t have a dog before reading this book, you’ll definitely want one by the end.

Dog Days is published by Doubleday on 11 March 2021