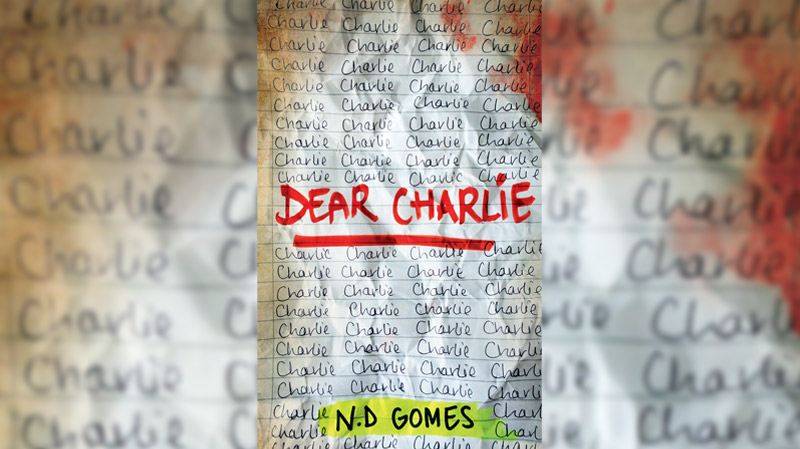 The YA debut from Scottish author N.D. Gomes centres on events that should never happen. We see it on TV and in newspapers on an alarmingly frequent basis, predominantly in the US where the gun control debate rages on. Shootings, specifically school shootings, have stolen innocent lives and rocked entire communities to the core. Inspired by similar tragedies such as the Dunblane school massacre, which took place twenty years ago, Dear Charlie explores the aftermath of such a devastating, senseless event from the perspective of a school shooter’s younger brother.

Sixteen-year-old Sam had no idea what was happening on the day of the shooting in 1996. He went to school, discovered something awful had happened, and went home. First his family thought that his brother Charlie was one of the shooter’s victims – in the wrong place at the wrong time. Very quickly they realised that Charlie was in fact the shooter and he had killed fourteen people, before taking his own life. With the media permanently camped outside their house, the storm that suddenly surrounds Sam’s ordinary family is overwhelming.

More overwhelming though is Sam’s confusion over why his brother would, and could, do what he did. To Sam, Charlie was a normal teenager – a little quiet and different perhaps, but he was happy. Or so Sam thought. With his parents constantly arguing and throwing blame, Sam’s only escape is his new school, but nobody wants to be friends with the brother of a murderer. Sam should be thinking about girls and schoolwork, but instead he’s forced to live in the shadow of his brother’s violent actions. The other kids, even the teachers, feel uneasy around Sam, as if being a murderer might run in his family, and he becomes something of a leper.

“…was I about to find out that I hadn’t actually reached the bottom, and that I could, in fact, fall much deeper into the hole that my brother had dug for me?”

Gomes understands the fear and confusion that swirls when news breaks of a school shooting. She was teaching in a classroom two hours away from Sandy Hook Elementary School when the fatal shooting took place in 2012. Gomes’ school went into lockdown and she experienced what would have happened if the shooting had occurred in her place of work. Suddenly, any child who’s labelled ‘different’ is a suspect, which is exactly what Sam becomes. Gomes writes with care and compassion, understanding how difficult it is for families in the wake of such a nightmare.

By putting the focus on Sam, instead of Charlie, Gomes allows the reader to look at the subject matter from a different perspective. Sam is completely innocent and yet he suffers as much as anyone else. At one point he tries to apologise for his brother’s actions by writing letters to each of the victim’s families but it only makes the media storm worse. Sam is every bit a casualty of his brother’s actions and yet his struggles are ignored, making his dignity and perseverance all the more admirable.

Dear Charlie isn’t an easy read. It invokes memories of breaking news stories, heartbroken parents weeping and groups of teenagers holding vigils, and yet it feels like a very important book, questioning right and wrong, life and death. It doesn’t try to explain or condone Charlie’s actions – that’s not the point of this book – but rather it puts the spotlight on those he left behind. How can someone move on if they’re forever blamed for another person’s actions? It’s a powerful book that will stay with you.

Dear Charlie is published by HQ on 20 October 2016