Book Review: Dancing With The Tiger by Lili Wright

It only takes the five pages of the prologue for this novel to establish itself as something dark and twisted with the promise of something brilliant about to unfold, but it’s the remaining 450 that embolden it to stand out and set itself apart with a plot that’s as richly imagined and refreshingly complex as the characters that inhabit it.

Because Dancing With The Tiger truly is a story of epic proportions, spanning, as it does, from the glittering world of gallery exhibitions at the Met to the undisturbed earth of an Aztec Emperor’s burial site beneath the streets of Mexico and all roads in between. The uncovering of the Death Mask of Montezuma by an American college dropout as he’s looting for artefacts to sell for drug money soon sparks a frenzy that sees art collectors, Mexican cartels and artists alike desperate to get their hands on the priceless mask. It is bought, sold, lost, stolen, traded and bought and sold again as it is passed through the hands of a seemingly unconnected group of people time and again under the unforgiving heat of the gruelling Mexican climate.

Fact checker Anna chases the mask in an attempt to escape her cheating fiancé and restore her father’s credibility, the looter wants it for the money its worth, drug lord Reyes wants back what was taken from him and art collector Thomas Malone wants it for his own macabre collection. Drawn into the fray are gardener Hugo, who’s drafted in by Reyes to secure the mask again through any means necessary and eliminate the competition, and artist Salvador, who made the mistake of running into a pretty American woman enjoying a margarita in the midday sun.

With such a wealth of characters, you’d be forgiven for thinking this novel would present itself as a choppy mismatch of perspectives and stories being forcibly related to one another, and it is only through Lili Wright’s skilled plotting that prevents it from doing just that. Every character has a purpose and a role to play in events, which is an impressive achievement in a novel with such a large cast. Of course, that’s not to say that every voice played an equal role; Anna and the looter’s stories are compelling, fleshed out and keep you guessing, but the one or two chapters told from the point of view of Reyes or the young papershop girl who had an affair with Hugo feel a little random and misplaced when compared to some of the wider plot threads. 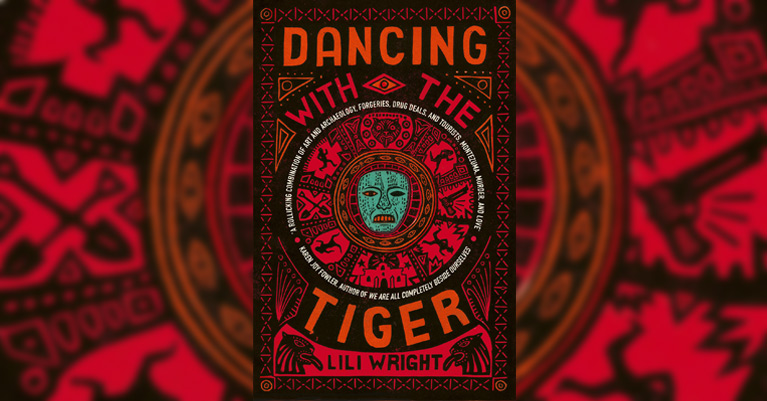 But, more than its characters, this novel is Mexico, and is deeply rooted within its customs, language and culture. Everything from the exploration of the worship of Mexican saints – to the point that Santa Muerte herself gets a chance to speak in her own chapter – to the description of the people and the streets, and the Spanish phrases seamlessly threaded in to narrative and conversations is there to create a true impression of the place. It’s clear in reading it that Wright loves the country, and it’s hard for the reader not to feel the same way by the end of the novel, even with all the crime, murders and gang activity portrayed.

Powerful, gripping, captivating, unique… There are many words you can use to describe Dancing With The Tiger. By far one of the most interesting aspects of the novel is its fascination with masks, with hiding yourself in plain sight, with the power associated with putting on a performance of yourself. “A man in a mask,” we’re told, “is above the law. He makes his own rules, his own moral code.” Just how far that moral code takes you is a question many of these characters are faced with, and their responses vary just as wildly as the characters themselves, making for one fascinating read indeed.

But above anything else, it is an incredible story that has been incredibly well-told and one that refuses to let up while you’re reading. A sitting or two is all you’ll really need to get through this novel and it’s worth every engrossing moment of it.

Dancing With The Tiger was published by Harvill Secker on 14 July 2016.