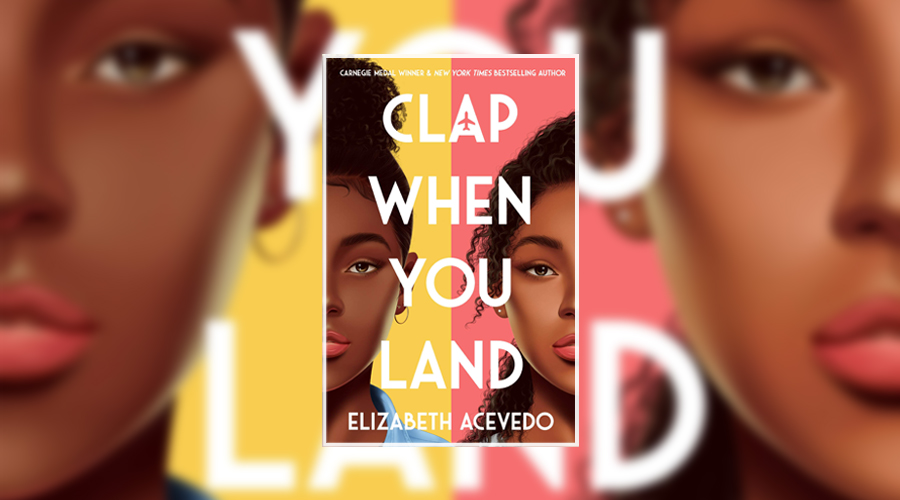 Told from the dual narrative of two girls separated by miles and secrets, Elizabeth Acevedo’s Clap When You Land is an affecting and bittersweet verse novel about loss, deception, grief and forgiveness. It’s loosely inspired by the real life tragedy of American Airlines flight 587, which crashed in Queens, New York en route to the Dominican Republic in 2001, killing all 260 people on board, of which 90% were of Dominican descent.

Camino and Yahaira are the same age and they share the same father, though they don’t know it. Living in the Dominican Republic, Camino always looks forward to the summers when her father returns from working in New York. She’s meeting him at the airport, an annual tradition, when she realises something awful has happened. Meanwhile, back in New York, Yahaira said goodbye to her father on bad terms. She’s angry with him, though she couldn’t tell him why, but when she’s called into the principal’s office, where her mother is waiting with terrible news, her already fractured world shatters even more.

Both girls are devastated by the loss of their beloved Papi, whose double life unravels in the aftermath of his death. Without her father’s protection, Camino is suddenly at the mercy of dangerous men who look upon her as something pretty to be sold. Yahaira has the secure life and future that Camino could only dream of but her heart is broken – by her father’s lies, by the guilt of her silence, by a traumatic event that she can’t forget. Not only must Camino and Yahaira face this new, harsher reality without their hero father but, as they learn of each other’s existence, they must also deal with his deceit.

“Papi was a man split in two, playing a game against himself. But the problem with that is that in order to win, you also always lose.”

Clap When You Land feels like not only a tribute to those who died, but to the lives – sometimes double – they lived, the families they left behind, and the Dominican culture that called them back to their homeland. Acevedo doesn’t paint Papi as a scheming philanderer; he was a good father to both Camino and Yahaira – as their love for him attests to – but he wasn’t always a good husband. Sometimes a person can be many different things to many different people and that comes across beautifully here. As Acevedo writes: “…he created a theatre of his life & got lost in all the different roles he had to play.”

Acevedo’s verse is poetic yet down to earth. There’s something wonderfully cathartic about this tale of two girls who’ve never met, who didn’t even know the other existed, but who must learn how to be sisters. They might be strangers to one another but they’re bonded by a shared loss and grief that only they can understand. They need each other, though they don’t realise it at first, and the latter half of the novel deals with them coming to understand that the other’s heartache is just as important and urgent as their own. Camino, in particular, needs a helping hand, though she’s too proud to ask for it. Yahaira’s existence might come as a shock to her but it’s also a lifeline.

Home also plays a big part in Clap When You Land, whether it’s the roof over your head or the wider culture and landscape of your birthplace. Acevedo brings the competing worlds of her story to life in vivid, colourful detail – from the urban cityscape of New York to the warm, tropical climes of the Dominican Republic. It’s easy to see how someone like Papi might feel torn between the two countries and parts of himself; the constant push and pull of escaping and returning representative of how many Dominican’s feel.

There’s a lot of pain to be felt in Clap When You Land but there’s so much love too. The profound love between fathers and daughters, between mothers and daughters, between friends and girls and sisters. Between compatriots too. It’s a simultaneously heart-breaking and heartening novel, taking readers through the very real agony of losing a loved one to such a sudden, gut-wrenching tragedy, with all the stages of grief that come with not being able to say goodbye. Yet it’s a feeling of optimism that the book ends with, focusing on the hope that emerges from what feels like the most hopeless of situations. A hope that can be found in both people and places.