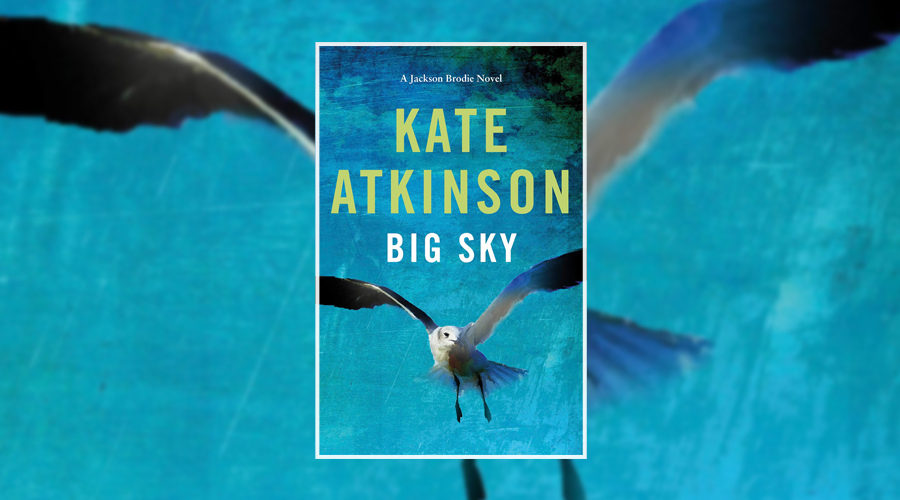 There’s a lot going on in Kate Atkinson’s latest literary crime novel, Big Sky. Women with dark pasts. Marriages built on secrets. Old friends reuniting. Girls going missing. Women being duped. Middle-aged men running a criminal organisation. A teenager and a drag queen pulled into other people’s drama. A police duo trying to crack a historic case. And at the centre of it all, through one cleverly crafted coincidence or another, is Private Investigator Jackson Brodie.

Big Sky sees the ex-army, ex-Cambridge Police Inspector relocated to a quiet seaside village in North Yorkshire, where he spends his time sleuthing for clients with his aging Labrador in tow, and occasionally spending time with his noncompliant teenage son. Brodie’s latest job is to gather damning evidence for a suspicious woman who believes her husband is having an affair. It’s whilst investigating this fairly mundane case that Brodie stumbles upon a man contemplating suicide on the cliffs. One near-death experience later and Brodie’s investigation takes a much more sinister turn, leading him to a criminal network and a Stepford Wives-esque woman who’s much more than she seems.

It’s been nine years since Jackson Brodie last graced the page in Started Early, Took My Dog, and Atkinson wastes no time reacquainting readers with the slightly curmudgeonly but astute-as-ever PI. He has a dry sense of humour and a penchant for country music. Moreover, he genuinely cares about doing the right thing, even if the right thing means breaking the law he’s vowed to uphold. Central to Big Sky is a story of justice. Of bad people being made to pay for their crimes, and innocent people being given a second chance. Jackson helps to make that happen but this isn’t just his story. This is the story of Crystal, the trophy wife whose husband is part of the same criminal organisation she escaped. It’s the story of Harry, a young boy navigating a dark world. And it’s the story of countless girls and women deceived and mistreated by men.

“Wronged wives were a law unto themselves.”

Only a writer like Kate Atkinson could take so many complex plot strands and weave them into a story that’s not only plausible but incredibly entertaining too. Big Sky deals with some uncomfortable themes but it never lingers on them, veering away from gloomy crime territory. Instead, Atkinson delivers a wry mix of crime hijinks and mysteries that would give DCIs Barnaby and Stanhope a run for their money. It’s got a bit of a Fargo feel to it, albeit an inherently British version with a Northern setting. The villains of the tale are far from criminal masterminds and the victims give as good as they get. It also often feels as if Brodie is a redundant bystander to events, arriving just after the action is over or letting other characters take the lead. It all lends an enjoyable gallows humour to the book.

Big Sky is the fifth Jackson Brodie detective novel but it works perfectly as a standalone too. Atkinson drops in conversational anecdotes surrounding Brodie’s backstory, delving into his childhood and his failed relationships with a frankness that lets readers understand the character without pitying him. It’s a joy to unravel the mystery with Brodie and it’s a joy to read Atkinson’s words – at once intelligent, witty and culturally aware. More proof, as if we needed it, that Kate Atkinson is one of the UK’s finest authors.

Big Sky was published by Doubleday on 18 June 2019